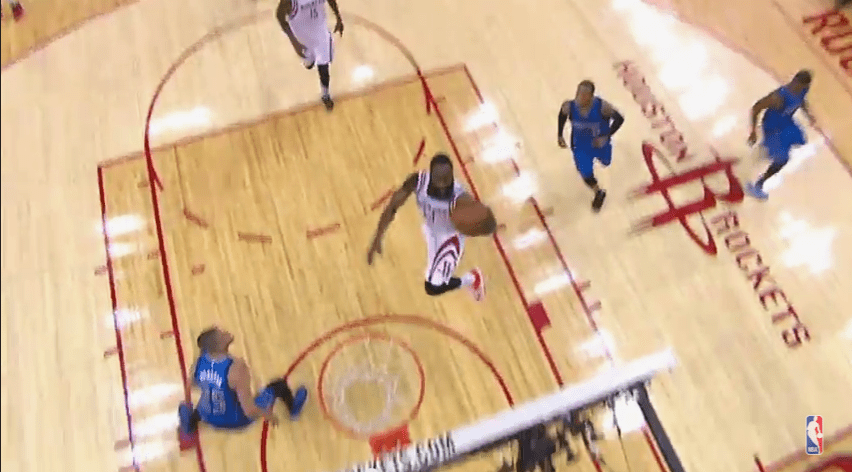 From an outsider’s perspective, an outsider who would only glance briefly at the showy ESPN notification on their iPhones every quarter during Game 1 of the Dallas Mavericks, Houston Rockets showdown, the game seemed to rather recklessly wasteful in terms of the struggling Mavericks. Unfortunately, those who just glanced at their phones for updates, have absolutely no idea how correct they actually are.

During the first quarter, it wasn’t a game – it was a massacre led by one James Harden.

Regardless of Rajon Rondo drawing a foul on Harden in order to start out the game held in a venue housing thousands of disgruntled, and very verbose, Houston fans, the galumph way Dallas inched across the floor during the opening minutes was rather, well, alarming to say the least. Dallas managed to trail Houston 7-2 with 9:00 remaining in the first, their perplexed gazes barren as they stood, almost motionless on the defensive, and offensive, ends of the floor. When the Mavs were able to creep back within eight (24-16) during the final minutes of the first, the Rockets managed to push it back to 12 as the Mavericks appeared to be well placed out of their league. After one quarter of Dallas spilling their guts all over the court in Houston, the Rockets led 32-19 as the Mavs shot only 7-of-23 with six turnovers.

Despite opening up the second quarter with yet another turnover, Amar’e Stoudemire managed to draw Dwight Howard’s third foul of the evening. J.J. Barea managed to give a spark off the Dallas bench after a life which put the Mavericks within ten points with 8:53 remaining in the half. Regardless of just shooting 34.3 percent, Dallas only managed to be down by five (37-32) with 6:27 remaining the second.

Chandler Parsons, his face wincing in pain, quickly limped to the bench during this second quarter as attention was sourly brought to his ailing knee, and he was ushered to the locker room as Houston fans booed and cheered his apparent injury in a tacky huff while pained Dallas fans peered on, their playoffs hopes swaying in the wind.

Parsons’ teammates, mainly on Dirk Nowitzki in pure playoff form, evened out the game 40-40 after a Dirk bank-in with 4:44 left in the half. However, it was the former Rockets small forward who emerged from the locker room skipping with a bright light in his eyes, ready to join his new comrades on the floor with just under three minutes reminding in the half, bringing a dizzying sigh from Dallas fans. Rajon Rondo managed to wow on offense during the second, something he had failed to do during this tenor with the Mavericks until Nowitzki’s shooting mentor, the famous Holger Geschwindner, offered to tutor him months before, something a known coach-difficult Rondo actually took up. Rondo put up 11 points in the second quarter and managed to bring the Mavericks back into the game offensively.

It was, well, strange.

Rockets went into the locker room leading 59-55. Mavericks finished the second shooting 59.3 percent after shooting an atrocious 30.4 percent in the first quarter.

But for Dallas fans well aware of the dreaded third quarter from early season woes, this game could be decided in these 12 minutes. Houston came out on a mission and went on a 6-0 run in order to start the second half, much to the dismay of horse fans. Dwight Howard did work and pushed his Rockets’ lead to a quick 65-55.

Dirk managed to put life back into his team after nailing a 3-pointer only to be fouled by former (Championship) teammate Jason Terry, who he yelled “And-1” to in a pseudo factious manner.

Dallas was left without Devin Harris, whom had been recently suffering from turf toe before the start of the playoffs, after the point guard exited quietly before the end of the first half, only to emerge softly to take a seat on the bench and witness Houston play the passing lanes with vigor.

The Rockets, dominating from the three-point line 41 percent to the Mavs 25 percent, strolled into the final quarter leading 84-77 despite an impressive buzzer beater from a struggling Monta Ellis.

Despite Hack-a-whoever plays and clawing efforts from Dallas during the final quarter, Corey Brewer and Trevor Ariza helped lift the home team over the Mavericks during the fourth as the Rockets took Game 1 118-108.