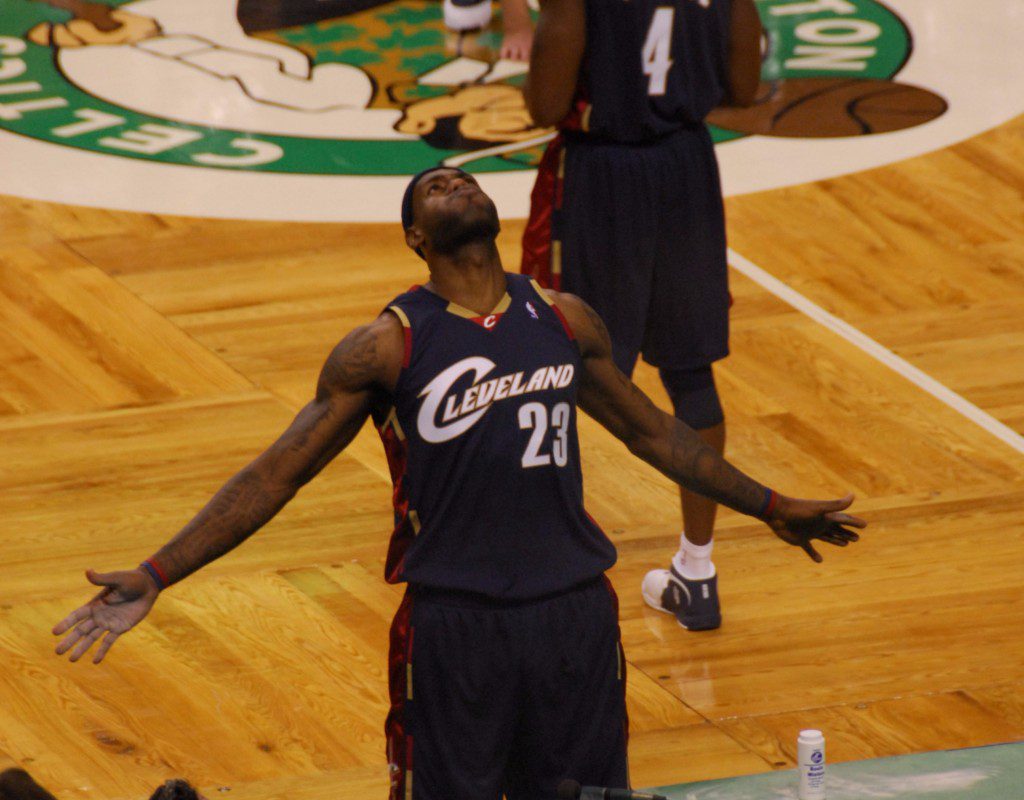 Game 4 between the Cleveland Cavaliers and the Boston Celtics was the final game of the series and the Celtics’ season.

This was not unexpected by any realistic NBA follower, but you can guarantee that did not take anything out of the building in Boston. The Boston fans are extremely proud of their team for they way they played this season, and even if the Celts had been blown out by 100 points, the seats would be packed until the very end and the noise level loud until the final buzzer. The Celtics have kept themselves relevant this season and the speedy emergence of head coach Brad Stevens should be a story all around the league. With all of that being said, Cleveland is without question the favorite to win it all this year because this could be the best assembly of “knights” King James has ever.

The story was given to us that Marcus Smart overslept and was late for the early-morning shootaround, so the Celtics started Jae Crowder in his place. While I do not believe that for a fraction of a second, whatever the reason may be, I am glad Stevens finally switched something up in the lineup to get his team going offensively. While understandably, the Cavaliers did not change a thing as far as their starting five, because as the saying goes; if it’s not broke, don’t fix it.

Cleveland’s ability to get second chance shots off of offensive rebounds is the reason why the Celtics have only hung around in games this series instead of pulling away. Brandon Bass is a smaller power forward and the duo of Kevin Love and Timothy Mozgov is far too mountainous for the Celtics underneath the hoop. It was apparent from the second Cleveland possession of the game, a Mozgov offensive board led to a J.R. Smith three and a Celtics timeout.

Out of the timeout Stevens once again drew up a masterful play leading to wide open layup for the longest-tenured Celtic, Avery Bradley. Great plays out of timeouts has been the strong suit of the Celtics all series and the most consistent thing they’ve done on the offensive side of the ball all series. But no matter how well they have executed out of the break, the strong shooting of Cleveland kept Boston at bay as the Cavs hit six of their first nine shots, putting them up six early in the game.

Isaiah Thomas and Kelly Olynyk were the first two substitutes of the game for either team and Olynyk made his biggest impact of the series by tying up arms with Kevin Love, seemingly causing Love to dislocate his shoulder and sprint directly off the court into the locker room. While at that point we were unaware of the status of Love, this put a strain on the Cleveland bench and gave the green team a shimmer of hope to avoid the broom.

With a minute-thirty to go in the first quarter the news broke the Love would not return to the game. Almost immediately after, the Celtics checked in Gerald Wallace for the first time in the series. I couldn’t help but wonder if that had something to do with a scouting report Stevens had. Would Wallace go on to make a big difference in the absence of Love? The quarter would end before we could get an answer with the Celtics down by the widest margin of any first quarter in the series.

Love’s absence could not be more obvious st the start of the second quarter with the Celtics getting two-straight buckets down low, one by late comer Marcus Smart. Mozgov seemed to be picking up the offensive slack left behind by Love, but Boston wanted to force the issue in the paint by bringing seven-footer, Tyler Zeller, back in the game, along with six-foot-ten-inch, Jonas Jerebko. How did the Cavs respond? With LeBron James playing stretch-forward shooting, and making threes. Cleveland had its foot on the gas and the young green team in its rearview mirror as they went up 12 halfway through the second quarter.

With no one stepping up for the Celtics it became abundantly clear that Love would not be missed as severely as one may have assumed. James again showed his team when to play with urgency and when to conserve energy, but when they are in cruise control they are a basketball symphony with James as the conductor and Kyrie Irving as his lead musician. A treat to watch, even for the most stubborn Celtics fan.

Jae Crowder has continued to keep the fans and his team in games this entire series. A made and-one followed by a behind the back picturesque assist to Jared Sullinger gave Cleveland Cavaliers’ head coach David Blatt his first reason other than injury to call a timeout. The Celtics again came out of a timeout with high energy forcing Cleveland into some tough looks while keeping the faith alive at the TD Banknorth Garden.

While the Boston fans kept cheering for their home team the Cavaliers defense was becoming more flawless the longer the half wore on. Although, it is a long way away one cannot help but think that the answer to the amazing duo of Stephen Curry and Klay Thompson is Kyrie Irving and Iman Shumpert. Turnovers and defensive pressure by the whole Cleveland team, but especially the defense of Shumpert and Irving meant nothing easy offensively for Boston and that led to some frustration. All of which came to a head with a scuffle between Jae Crowder and Kendrick Perkins off a dirty pick set by Perkins.

A flagrant 1 foul was called on Perkins (he was lucky he stayed in the game) and a double-technical for them both made the home crowd wake up as well as the Cleveland players. The referee’s began to call the game a lot tighter as there were three consecutive foul calls capped off by an unnecessary review of a good defensive play by Kyrie Irving. Another strong foul by Sullinger on Perkins showed us that these teams will have no love loss at the end of the series, because there was never any there to begin with.

The first half was encased in hard fouls, players being injured, and questionable calls as the Cavs went into the locker room up 21 after a 14-to-4 run giving them the largest lead at halftime in the entire series. The team from Boston was on their last leg and even with Love being out for the remainder of the game, they seemed to have squandered their opportunity to avoid the sweep. They missed all eight of the three-pointers they took and turned the rock over ten times in the first half. Would the second half show any improvement for the fighting Irish?

The Celtics went on to miss shots and turn the ball over, but that wasn’t the story early on in the half. J.R. Smith grabbed our attention by continuing his campaign for dirtiest player in the league by throwing a no look haymaker at Jae Crowder, seemingly knocking him out. Smith was rightfully ejected and the fall from the punch caused Crowder to hurt his leg and leave the floor. All of this negativity finally sparked the Celts and the momentum began to swing the way of the home team, led by Brandon Bass.

Despite it being a 17-point game with eight minutes to go in quarter number three, the Celtics seemed to be turning the tide. Yet again, squashed by the fact that Cleveland was giving them points at the line, to which Boston couldn’t capitalize. Shooting a begrudging 8-for-17 from the foul line at one point.

Cavaliers’ center Mozgov continued to dominate under the rack with no opposition from anyone on the Celtics. Grabbing offensive rebounds and hitting all his foul shots, showing Cleveland what an amazing asset he is. To me he is easily the most surprising player on the Cavs roster this season and certainly exciting his teammates in the first playoff series for his new team.

A late-quarter surge by the Celtics would cut the lead to a manageable 13 and the atmosphere in the Garden was electric. The fans were willing to shoulder the load of a loss for their young team as long as the could cut it close and make the final quarter entertaining. Isaiah Thomas was happy to oblige by hitting his first two shots of the game; a transition three and an easy layup off a steal. The absence of Smith was beginning to show, as two missed free throws by the Cavs led to a humungous throw down put-back by Marcus Smart erupting the home crowd.

Smart was making his presence felt with the dunk and a hustle play to gain possession, leading to a foul putting him on the line. An amazing defensive play by Celtics bench warmer, Phil Pressey, led to a jump-ball between him and James. Pressey was Giving up at least six inches, so of course, James won the jump, but a crafty play by Sullinger gave the ball to the Celtics. A drive and miss by Smart gave Sullinger the chance for a tip before the buzzer, it went in, cutting the Cavs lead to nine heading in to the fourth. The cavs had the lead, but without doubt, the momentum belonged to the Celtics.

As expected, James was attempting to take control of the final quarter by isolating himself to one side of the floor, forcing Boston to double team him, but for the first time all series his teammates were missing open shots. That is, until a three by Jared Sullinger was answered right away by Irving off of a James assist, putting the Cavs back on top by double-digits.

Sullinger refused to allow his team to go down without a fight, getting tough putbacks to go down consecutively. Sullinger already amassed a double-double with seven to go in the game, sparking the rest of his team and keeping the fans in it with the help of Brandon Bass. The window for the Celts to steal a game was closing fast and unless they could get stops to go along with the scoring uptick, it would all be for naught if the missed free-throws that plagued Boston continued.  Which they did. By the six minute mark the Celtics had left 13 points on the table by going 16-of-29 from the foul line.

Cleveland would turn up the heat on the Celtics sensing their vulnerability and put this game, series, and team to bed with a charge led by the king himself.

With a mixture of the young and unexpected Celtics playing on house money and the ability of LeBron James to lead a team, this was easily one of the the most entertaining four-game sweeps the NBA has ever seen.  It was a treat to watch and analyze these four games.

I wish immense luck to any team that has to play the Cleveland Cavaliers going forward.