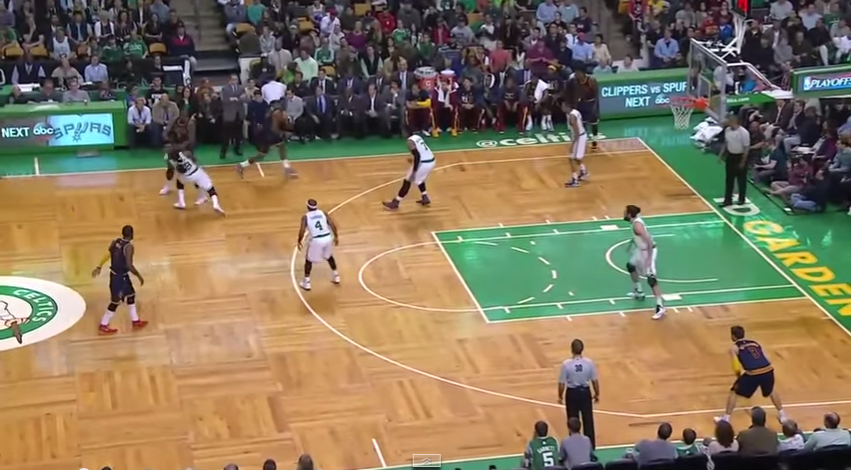 Screen capture courtesy of the NBA.

Yeah, yeah, yeah… We all get it: NBA superstars and their respective teams get calls. I suppose it’s just part of professional basketball in this day and age. While this ridiculous reality is unfortunate for the game and quite hard to stomach at times, it’s to be said that this reality’s being isn’t always a result of mass biased in the officiating realm. Referees have a huge responsibility in making the right decisions and it’s important to understand that not every play is going to be called accurately; even with two or three sets of eyes on the court… high definition monitors… expertly efficient replay technology… I suppose they just can’t get it right every single time. The human factor, if you will. However, there are many plays that should be easy to determine, yet go grossly in the wrong direction that is causes cringing pain in the bellies of basketball supporters everywhere.

This facet of today’s game is particularly difficult to swallow during the postseason, when outcomes are often are decided by one or two possessions. Sure, a team making a run for a title shouldn’t weigh their victories and or losses on a few bad/good calls, and we all know that real success will always champion over difficult decisions made by the officials. But there is one area where this biased trend of poor play calling needs to stop, and that’s when it comes down to the health and safety of the NBA player himself. When this sacred standard isn’t kept, nobody wins. Not the team on the short-end of the bad call, and most importantly, not the benefactor of the biased call either. Why? Because you can’t allow dirty behavior to persist and expect anyone to end up on top. Bottom-feeding energy manifests negative results for all parties involved, a point that’s clearly illustrated when looking at the officiating in Game 4 of the first round series between the Boston Celtics and the Cleveland Cavaliers.

The game was scrappy from the very beginning. Kelly Olynyk, in fighting for a rebound, got tangled up with Kevin Love and, as a result, Love’s shoulder was dislocated. An injury that not only took him out of the game, but would end up sidelining him for the remainder of the postseason. This is when the referees needed to step up, be supremely vigilant with their control of the chaotic environment: stop the reckless physicality before it escalated any further.

While the Olynyk play was indeed reckless, and most certainly caused harm to a key player in the series, I think it’s crystal clear that Kelly, a guy who only picked up one technical foul during his tenure at Gonzaga, who had zero technical fouls in the NBA up until that moment, was not trying to intentionally rip K-Love’s shoulder out of it’s respective socket. It was a rough interaction and there was intent to be extremely physical, but a guy that’s never been the perpetrator of a flagrant foul, receiving only one tech throughout the duration of his basketball career, doesn’t seem to be a likely candidate for deliberately dirty play. Track records are important.

This same story doesn’t apply to a Kendrick Perkins, who in the second quarter of game four, set a highly illegal screen against Jae Crowder. Following the obvious transgression on the floor, Perkins then proceeded to take a swing at Crowder’s face after he squared up on him, clearly showing his want to attack in one form or another. After the whistle blew, Perkins’ actions, unlike Olynyk’s, showed all the signs of intent to harm a player. With the way the game had been going, hell the series in general, Perkins needed to have been ejected right then and there to keep things under control. He wasn’t. And this is where the biased comes in: Letting Kendrick stay in the game was a huge mistake. And while at the time, most would see this as ultimately benefiting the Cleveland Cavaliers, let’s explore the ramifications of not controlling a serious situation in favor of a superstar’s team and how it doesn’t benefit anyone when all is said and done.

When I stated earlier that the referees needed to be super vigilant after the Kevin Love injury, I meant exactly that of handling the Perkins’ foul with an ejection, not calling the first minuscule foul on Crowder the following play. Unfortunately, experienced fans all over knew the way this game would be called after the refs’ error; Olynyk hurts the precious Love, Kendrick is permitted to stay as some sort of back alley-reward for the injury inflicted on the Cavs’ superstar, and now no one would be able to touch King James or any of his cohorts for the remainder of what would be the Celtics final game of the 2014-2015 season.

The leaning trend continued all the way up until it’s very unfortunate climax when J.R. Smith responded to defensive pressure from Crowder by throwing a backhand to his face. Following the blow, Jae was immediately thrown to the ground in a way that caused injury to his left knee, taking him right out of the game. This resulted in the ejection of J.R. Smith and a two game suspension going into the next series against the revived Derrick Rose and Chicago Bulls. So, justice is served? Absolutely not.

Playing favorites and not making the right call when a dirty play occurs allows for negative interactions to fester and dirtiness to spread. And here’s the catch: In what looked to be a biased call to the benefit the Cavaliers, ended up being a call that would ultimately remove their spark plug off the bench for two critical conference semifinals’ games. What started out as a gift for Cleveland ended up being a curse as I’m sure they would have much rather have gone without Perkins for a game or two, a guy averaging in the post season, three minutes, .5 rebounds, one and a half points along with a turnover as opposed to Smith who’s 2015 postseason playoff stat line is roughly that of 27 minutes, 10 points, two steals, three rebounds and a pair of assists . Not to mention the promise of draining those very crucial three balls game in and game out.

So how does this all play out? Let’s look at the facts. Cleveland would have won the series against Boston regardless of the terrible officiating. The Cavaliers are now 0-1 against the Chicago Bulls in a second round matchup where they play Game 2 without J.R. Smith again tonight. And while history shows that the Bulls, after winning Game 1 against a LeBron James-captained team, have gone on to lose the next four games, doesn’t change the fact that this isn’t the Lebron James-captained teams of old. We’re now looking at a broken down Cleveland roster without their second best player, and arguably most explosive X-factor off the bench, versus a revitalized Chicago roster featuring a seasoned Jimmy Butler, a Derrick Rose that’s playing with spirit that goes beyond physical production, one of the greatest coaches in the league, along with critical bigs in Noah, Mirotic and Gasol, a killer three point threat in Dunleavy… the list goes on and on.

This is a new time, a new day and while the officials and league can continue to allow this biased calling to ensue, they’re not doing anyone any favors when all’s said and done. Whether the NBA continues to pamper the Kings, prim the beards, massage the splash brothers, and stroke the biggest egos in the game with unfair calls, justice will be served regardless. The difference is, if proper decisions are made at the officiating level, the game of basketball will be regarded once more as a game of honor, respect, and ethics. Period. The end.