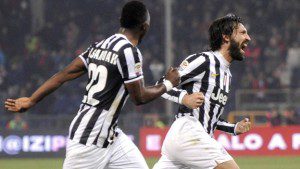 Italian champions Juventus take the advantage into their second-leg encounter with opponents Real Madrid as they seek to reach this year’s Champions League final. The last time Juventus were in the final, in 2003, they lost on a penalty shootout to Italian rivals AC Milan.

The two-time champions, winners in 1985 and 1996, started the match with confidence following their domestic league triumph over the weekend. The Turin outfit lifter their fourth consecutive Serie A title after defeating Sampdoria 1-0 on Saturday.

Juventus were in the lead just before the 10 minute mark after a good passage of play, passing the ball well, and switching the ball effectively across the pitch. Striker Carlos Tevez found an opening and struck a shot towards goal forcing a save from Iker Casillas. Casillas could only divert the ball into the path of Alvaro Morata who was on hand to score the rebound.

The Italians threatened to score again, with Tevez looking their most dangerous player. The Argentine’s link-up play with teammate Patrice Evra was effective in the opening stages. Both players have previous experience in the competition, with winners’ medals while playing for Manchester United in 2008.

Real Madrid’s sparkling forwards couldn’t create much as the combination of Andrea Pirlo and Claudio Marchisio was enough to break-up play and set Juventus on the counter-attack. The Italians looked content on building from the back as goalkeeper Gianluigi Buffon got plenty of touches on the ball.

Real Madrid drew fouls in dangerous areas and still posed a threat in the air against the Juventus defense. Cristiano Ronaldo missed an opportunity to level the scores after being sent through on goal, but dragging his shot wide of the post. He eventually equalised after James Rodriguez did well down the right side to get the ball into the box for Ronaldo to head home at the back-post, and score a record 76th goal in the competition.

Juventus were left exposed on the left-side of their defense as Madrid looked for another goal. Juventus remained patient in their build-up play when on possession, as Pirlo carefully picked out passes to Stephan Lichtsteiner on the right and Morata through the middle, but it was Madrid who nearly stole the lead just before half-time when Rodriguez’ diving header crashed against the crossbar. And despite his best efforts, defender Marcelo couldn’t keep his follow-up shot low enough, firing inches over the goal.

Both teams started the second-half in scrappy fashion knowing that the next goal was important. Juventus remained concentrated and caught Madrid on the counter once more this time winning a penalty on 55 minutes. Marcelo had a shot blocked, and suddenly Juventus were on the break with Tevez racing in the box before being tripped from behind by Daniel Carvajal. Referee Martin Atkinson pointed straight to the spot, but didn’t wave a red-card as Juventus players crowded the Englishman demanding an explanation.

Tevez stepped up with a reflection of confidence to face Casillas, while Buffon nervously turned away at the other end. Tevez made no mistake, firing his penalty down the middle to send the players and fans roaring in celebration.

The introduction of Javier Hernandez for Madrid caused Juventus immediate problems, but it also left Madrid vulnerable at the back. Luckily for the Spanish giants, Juventus couldn’t finish their chances. Madrid will be content with their away goal, as they seek to overturn the tie in their favor. Juventus though, will hope they can protect their narrow lead when they meet at the Santiago Bernabéu on the 13th of May.

While Madrid definitely pose a threat, Juventus will be quietly confident that they have the right players to help them reach the final. Goalkeeper Buffon produced heroics in both legs of their quarter-final tie against French opponents AS Monaco, and will no doubt be up for the challenge once again. Forwards Tevez’s pace and Morata’s strength caused Raphael Varane and Sergio Ramos problems the entire match. Morata in particular was strong in his hold-up play dragging defenders and creating space for Tevez to shoot towards goal.

Madrid’s coach, Carlo Ancelotti will hope his players are motivated by the loss, and approach the match with the confidence that they can come back and attempt to defend their crown. However, with Juventus still in contention to win three trophies this season—they play Lazio in the Coppa Italia final on June 7th—they’ll have their own objectives.

After taking over from Antonio Conte last summer, Massimiliano Allegri has done a fantastic job in creating a Juventus team that is finally challenging for trophies where they belong, amongst the big clubs. Beating Madrid doesn’t mean they can easily overcome either Bayern Munich or Barcelona—who play in the other semi-final. Allegri will know that his players have to dig deep if they plan on reaching the final, but the status of underdogs may just inspire Juventus to a fairy-tale triumph in Berlin.