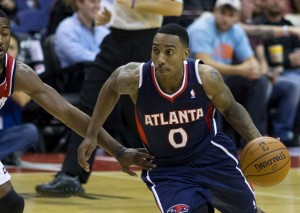 What a difference a couple of days make.

To be fair, just like Friday night’s game, it shouldn’t have come down to some Paul Pierce heroics — even Pierce himself admitted after Game 3 that too much of The Truth can be a bad thing.

“I usually like to save those shots for later rounds,” Pierce joked after Game 3.

For the Wizards, without John Wall, the team turned to Pierce again in the closing seconds of Monday’s game.

The Wizards, who had trailed for most of the game, somehow found themselves down just three points with 5.9 seconds remaining. Otto Porter waited on the inbound until Pierce became open — in fact, more open then he had been on that famous finale in Game 3. This time however, there was no Kent Bazemore flying towards him or Dennis Schroeder with a hand in his face. This time, it was just Pierce and and the chance at a tie — and maybe an unlikely 3-1 lead for the 5-seed Wizards against the top seeded Hawks.

After a pair of free throws by the Hawks, the game was over, the series is tied up and the Wizards will need two wins from three starts, including at least one win on the road in Atlanta to advance to the Eastern Conference Finals.

It’s even more daunting with the Hawks seemingly finally finding somewhat of a groove.

Paul Millsap, who came off the bench in Game 3 due to illness, was fully sick in Game 4. The Hawks big man did a little bit of everything – 19 points on 7-of-13 shooting, pulling down five boards and dishing out six assists.

However, Jeff Teague, who in Game 3 was essentially a no-show (save for a dirty play on Bradley Beal), finally came up big as many have been waiting for all playoffs.

The Hawks point guard led the team with 26 points to go along with eight assists. Together, with reserve point guard, Dennis Schroeder, the Hawks backcourt hounded the Wizards Wall-replacements of Ramon Sessions and Will Bynum, gallant but consistently outmatched.

For a large part of Game 4, it looked like these teams had pulled a Freaky Friday. The Wizards unleashed a barrage from deep behind Paul Pierce, who went 5-5 from 3-point land, in the first half.

As for the Hawks, well, they worked the ball inside to much success (18 points in the paint in the first quarter) but also peppered away from the midrange too.

Meanwhile, Bradley Beal’s career high for points in a playoff game (34) was all in vain. However, he did win some fans with his relentless penetration and another smothering performance on Hawks deadeye Kyle Korver who, in the past two games, has only made four three-point shots on nine attempts. By comparison, in the first two games in Atlanta, Korver was a combined 9-26 from the field.

It’s now a three games series heading back to Atlanta.

With John Wall, there’s no doubt the Wizards would win this series. However, starting Ramon Sessions and especially playing Will Bynum clutch minutes down the stretch is a massive downgrade. Costly turnovers and wasted possessions hurt the Wizards, who hung tough all game but couldn’t finish the job.

Besides Beal and Pierce, the Wizards are crying out for a third hand in the heavy lifting ahead of them. Indeed, Pierce says he’d like to save those big shots for later in the playoffs, but the truth for the Wizards is they may really need more of them now.