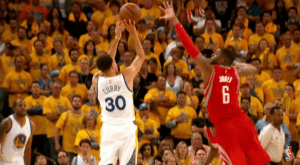 Stephen Curry and James Harden are making the West finals majestic to witness. For anyone who appreciates the game of basketball, this isn’t hyperbole in the slightest. The Golden State Warriors took Game 2 over the Houston Rockets by a 99-98 score, but the top-two MVP finalists have been the story thus far. Curry put down 33 points and six assists on 13-for-21 shooting. It’s difficult to say he was outshined since Curry’s Warriors won the game, although Harden did perform better. The bearded one had 38 points, 10 boards, and nine dimes. He only had two turnovers in his 41 minutes played.

This 2-0 lead for Golden State shouldn’t be misinterpreted as domination. Houston could’ve easily won either game, and Kevin McHale‘s squad should have confidence about its prospects for Game 3 and 4 at home. Aside from Harden’s mastery, Houston benefited from a strong Dwight Howard showing. He had 19 points and 17 rebounds on an 8-for-11 shooting display. Houston was let down by Trevor Ariza‘s seven-point performance, and Josh Smith butchering the word efficiency by going 5-for-17 from the floor. After shining against the Los Angeles Clippers toward the end of that series, Smith has slipped back into his mysterious, enigmatic status.

On the Warriors’ end, countless highlights were presented. They amassed a 17-point lead in the first half, Andre Iguodala had a filthy dunk in the vicinity of Howard, and Curry found Andrew Bogut on an alley-oop that would later be shown on SportsCenter. The Oracle Arena crowd exploded with each riveting play. Aside from Curry, no one was particularly outstanding. Klay Thompson only went 6-for-15, 1-for-7 on threes, while struggling to find a rhythm. His highlight came when he and Curry double-teamed Harden near the end of regulation, a hectic sequence that ended with Houston failing to even let off a shot.

The Warriors continued to receive well-rounded production from Draymond Green. His shot is neither pretty nor consistent, but his defensive intensity and committed floor game never cease. The Michigan State product had 12 points, eight boards, and seven assists. Bogut poured in unexpected offensive production with 14 points and eight rebounds. He also had five blocks in what can be considered his most critical performance of the playoffs. Shaun Livingston went 4-for-4 shooting wise in his 14 minutes of action.

To reiterate a thought mentioned earlier, the NBA should be thrilled that Curry and Harden are going back-and-forth in such an epic fashion. Each player is entering or within his prime while playing for a franchise on the rise. Golden State and Houston could have repeated playoff battles for years to come, meaning the peach-fuzzed Curry and grizzled-out Harden may have more mesmerizing shootouts over time. For now, the West finals stand with a 2-0 lead for the Warriors, and Houston looking to jump back into the series at home.

For a few notes on Game 3, it would be interesting to see how the Warriors managed without Curry shooting lights-out. He’s carried the team through two games, and his consistency compensates for the underperforming of others. If his numbers dip, Golden State will be susceptible. For Houston, they can’t afford two starters, Ariza and Smith, to have miserable showings in the same game. To upset the best team in the NBA, Houston will also require a Terrence Jones or Corey Brewer type of player to majorly step up. Harden and Howard can’t do it all.