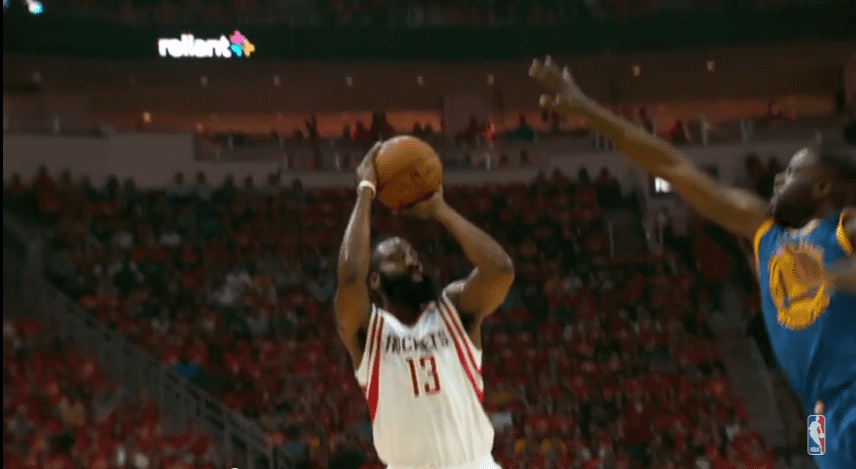 The Houston Rockets appeared to have a collectively crushed spirit after Game 3’s 115-80 loss to the Golden State Warriors. Getting swept at home following that disaster would’ve made logical sense. Instead, the Rockets owned the Warriors in Game 4, amassing a 25-point first half lead before winning by a 128-115 final. This contest was all about the dominance of James Harden. The bulldozing guard bullied his way into the paint, and balanced his attack by also shining from beyond the arc. He dropped 45 points on 13-for-22 shooting, 7-for-11 on triples, and made 12-of-13 free-throw tries. The MVP runner-up responded admirably from his forgettable Game 3 showing.

The Rockets weren’t solely aided by Harden, though. Josh Smith went 3-for-12 on free throws in addition to turning the ball over six times. In spite of those numbers, Smith totaled 20 points and missed only one of his eight field goals. He was one of several Rockets to play with a dedicated sense of energy down 0-3. If Houston displayed such passion in its previous contest, we might have a different series. Regardless, Houston responded in a resounding manner, albeit a game too late. Trevor Ariza had 17 points and no turnovers. Terrence Jones poured in 14 points, five rebounds off the bench. Dwight Howard logged 34 minutes in putting up a 14-point, 12-rebound night.

For the Warriors, the team looked half-asleep in the first quarter. Houston primarily built a massive lead because of elite deep-range shooting, but missed defensive assignments and a lack of energy hurt Golden State. It was shocking to witness a usual defensive machine surrender 45 points after 12 minutes. As the Warriors attempted to crawl back, a hideously scary situation occurred in the second quarter. This happened when Trevor Ariza pump-faked near the hoop, causing Stephen Curry to bite by jumping in the air. He bounced off Ariza and landed violently on the floor. His back and neck absorbed the fall, and the impact left Curry motionless for a considerable period. Luckily, and surprisingly, Curry returned to the game later on during Golden State’s unsuccessful comeback attempt.

The Warriors’ top performers were Klay Thompson and Draymond Green. Thompson has played under his peak level throughout the West finals. In Game 4, the gifted shooter went 6-for-13 on triples on the route to dropping 24 points. Green has grown into a consistent double-double force with the Warriors. The vocal Green had 21 points and 15 boards on 9-of-14 shooting. He also rejected five shots and had four assists. Other contributors included Harrison Barnes, who had 14 points in 30 minutes, and Andre Iguodala, who had 13 points and seven rebounds. It’s worth noting the Warriors went 20-for-46 on threes in the loss, a number that would usually translate into victory. For perspective, Houston was 17-for-32 on threes as the two squads combined for an NBA record on triples.

NBA fans always hear the fact that no team in history has overcome a 3-0 deficit to win a playoff series. Don’t expect that historical narrative to alter in the West finals. Houston would have to win two of the games in Oakland, and defeat a Warriors team four consecutive times even though they haven’t even dropped three in a row all season. That said, Harden restored his confidence by torching his opponents in Game 4. Houston also has Ariza and Smith rolling again from the perimeter. Howard has been a consistent figure in the paint. Again, don’t expect Houston to win this series, but don’t anticipate them backing down, either. They fought in Game 4 after quitting in Game 3, meaning that fighting for the rest of this series shouldn’t be a question.

For notes on Game 5, keep an eye on whether or not Thompson can back up Game 4’s shooting effort with another effective long-range display. The most obvious key will be the health of Curry. He’s been diagnosed with a head contusion, a welcomed medical result considering the severity of the fall. Curry should be given a massive ovation by Golden State’s fans for Game 5. On the Rockets’ end, another MVP-level performance from Harden will be necessary. The team also typically succeeds when Ariza and Smith play well in the same game. When Harden dominates and his teammates join the ride, Houston is a machine. They’re also schizophrenic regarding reliability, though, and Golden State should start stronger when playing at home.