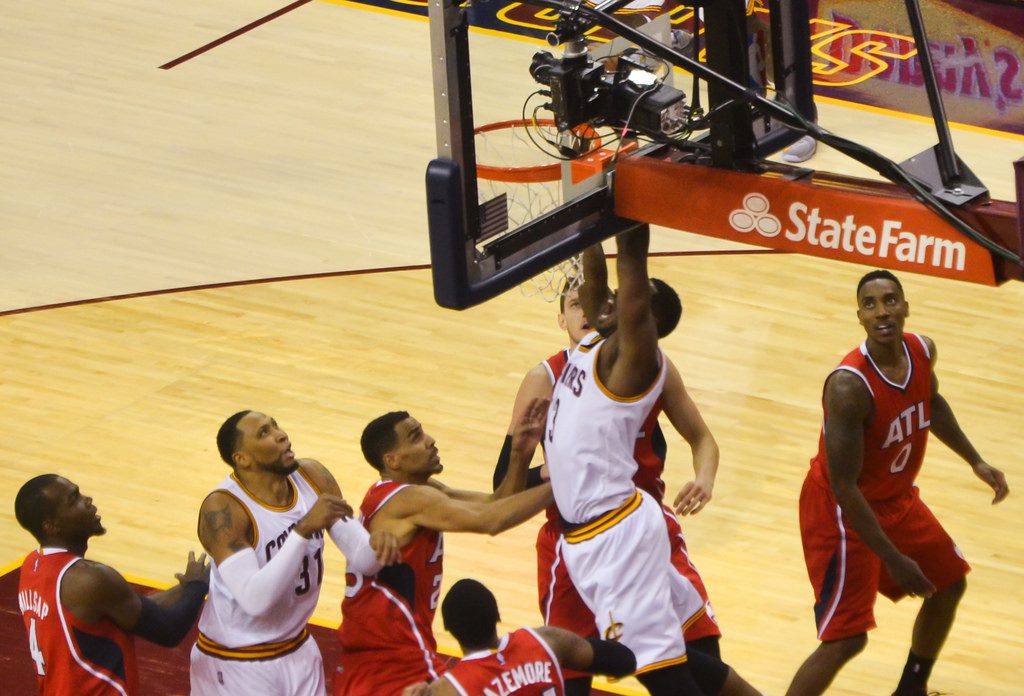 At least it didn’t happen in Atlanta.

Atlanta Hawks fans saw their season end seven-games quicker than they hoped when the Hawks went down 4-0 to LeBron James and the Cleveland Cavaliers in a Eastern Conference Finals.

This loss was a hard one to digest for Hawks fans, many who have waited decades to see their beloved team make it this far in the playoffs.

If you would’ve asked fans about their team before the season started, few would’ve said an appearance in the Eastern Conference Final ending in a loss would be a disappointment. But that was before these same Hawks ripped off a month long winning streak early this season. It was during that winning streak that the Atlanta Hawks went from a rebuild project that wouldn’t be ready for another two seasons, to a legit championship contender.

As fans watched on while the clock ticked away, it was looking like their miracle season would be over way before midnight.

It wasn’t the best way to go out. Minus All-Star forward Kyle Korver who was out due to injury, the Hawks ran up against a determined Cavs team.

Game 4 ended with the Cavs rejoicing at Quicken Arena in Cleveland. Six Cavs scored in double-figures as the Hawks lost 118-88.

Despite the final score, you can’t sum up this series or the team’s season by this loss.

The season began with internal drama that saw the former ownership group seek to sell off the team after voicemails leaked causing a smaller P.R. storm that Donald Sterling and the Los Angeles Clippers faced months earlier.

I remember walking into Hawks media day thinking that the players may check out before the season begins due to the turmoil surrounding the front office and ownership. Even though they made the playoffs the season prior, no one really thought of the teams as any real contender to win anything.

The vibe in the gym that day was anything but. It looked like a high school media day. The guys were loose. They were excited to be there and ready to start the season. Hawks legend Dominique Wilkins was present and talking about the “new Hawks.”

Coach Budenholzer and the team allowed the Cavs and Chicago Bulls steal all the spotlight. They just went along and won games. A lot of games. They went on a winning streak that would make the record books. They would place four players in the All-Star Game. This team was the surprise team of the season. Key word here is, season.

Few believed that the Hawks season success would translate into playoff success.

As the trudged along in the first round defeating the Brooklyn Nets and later battling with the Washington Wizards in the second round, they only had one more obstacle to overcome before you could cap off what would be the best season in franchise history.

The Hawks didn’t just go down in a whimper. In true immovable object fashion, they stood their ground until they couldn’t stand any more.

As much as you might want to think that this is the last we will hear from the Hawks, I’d tell you to hold onto to your bets for a little while longer. This Hawks team isn’t going anywhere.

While DeMarre Carroll and Paul Millsap might find new homes in the offseason, the team can be proud to say they have the likes of Kyle Korver on the perimeter knocking down threes and big Al Horford playing the role of a poor-man’s Tim Duncan. In a league that is powered by point guard talent, Jeff Teague takes a backseat to just a few. They’ll get back defensive stopper Thabo Sefolosha next season. Add in young talent like Kent Bazemore and Dennis Schroeder and you have some nice building blocks in place if the new ownership feels like they would have to rebuild.

It’s plausible to say the Hawks could be the second-best team in the East for the next few seasons.

Yes, the team is flawed. Currently, there is no go-to star player who would command a double team. They still need more depth coming off the bench. They wish that John Jenkins could develop into a consistent three-point shooter who can give them instant offense off the bench.

Some of those things can be handled in the offseason and the draft. It’s what the team already has in place that makes them a contender. They young players who are growing into stars, the stars who are learning their roles, a coach dedicated to a system and a ownership group ready to back them up all the way.

I look forward to seeing these Hawks eventually hold up the Larry O’Brien trophy soon. They deserve it as does the city.

This loss wasn’t expected, but neither was this season.