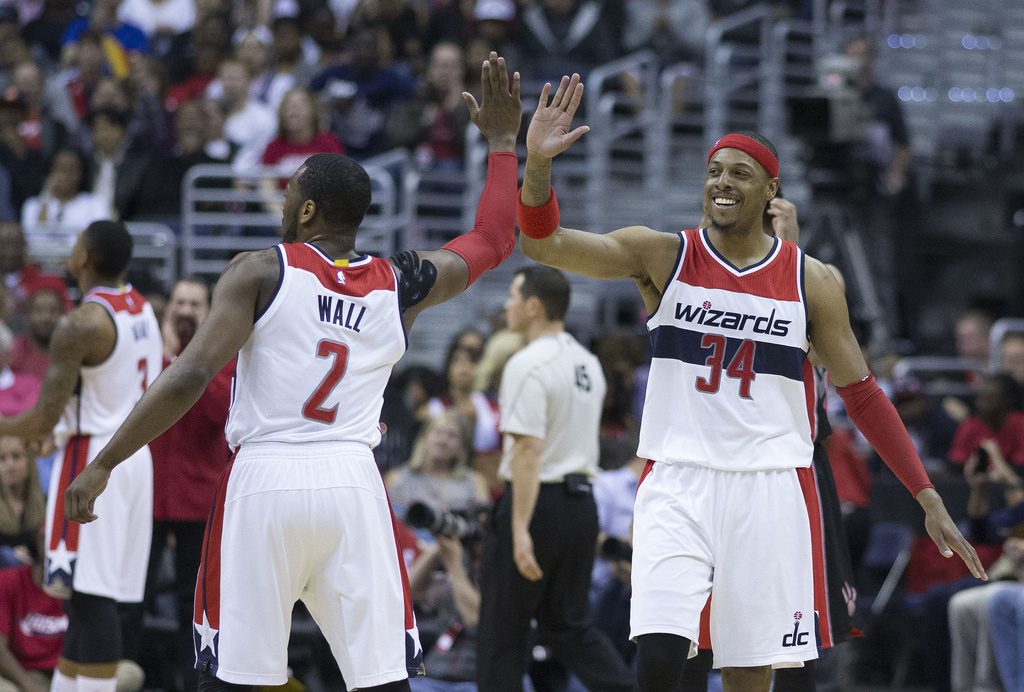 A couple of weeks have past since spring sports were wiped off of the map in Washington. The Capitals capitulated in seven games against the Rangers and the Wizards ran out of magic against the Hawks. Now, all anybody can talk about is Bryce Harper and the Nationals. And that’s pretty usual by D.C. standards. For both teams, however, a couple of different breaks could’ve meant all the difference between elimination and ultimate glory.

For many, the Wizards season ended on a three-point shot by Paul Pierce that was milli-seconds too late. In fact, a few of their games ended at the hands of Paul Pierce. The Hawks rolling over in four games against the Cavaliers only rubs salt into the wound, particularly given a healthy John Wall would’ve likely made all the difference. Instead, it’s time to look ahead for a team that’s put a few cracks in the glass ceiling but will be desperate to burst through next season.

Was the season a success? Yes and no. It’s the second-straight second-round exit in six games — both times with the season ending at Verizon Center, but the Wizards faithful should be buoyed. Their 2015 blues were eradicated by an inspiring post-season run that was a John Wall wrist away from making it’s first Eastern Conference Finals berth since 1979.

It starts with Randy Wittman‘s revelation to embrace small ball. Somewhere between the end of the regular season and the start of the playoffs, Wittman went from basketball purist to a full-fledged endorsement of run-and-gun three-ball hoops. The Wizards have preached defence with Wittman at the helm and while John Wall is also the head of the snake of Washington’s defensive scheme he’s also one of the most explosive and dynamic guards in the open court. He leaves trails of dust in the wake of a defensive rebound and he cuts a defence apart like a chopping board in the half court. The Wizards were ranked 27th in three-point makes (6.1) and attempts (16.8) per game. In the playoffs they upped the ante averaging 9.4 makes on 23.3 attempts per contest, good for best in the NBA Playoffs — even better than the Warriors. The effect of pivoting on the offensive philosophy was instrumental in the Wizards’ success, but will also cause a trickle down effect as the Wizards try to embrace the same strategy going forward.

John Wall will find you, is not just the tag-line to scary summer horror blockbuster, but also the simplest and most effective strategy for the Wizards. The more space the Wizards’ point guard can be afforded the more damage he can do in the open court. There’s few other players in the NBA that can get into the lane and finish with the same tenacity as Wall. If the three-point line is peppered with shooters: Bradley Beal, Paul Pierce, Otto Porter and Drew Gooden III — the Wizards proved they’re very tough to stop.

Sliding Paul Pierce across to stretch-four (as he did with great success a year ago in Brooklyn) and reinventing Drew Gooden III as a three-point stretch as well appeared to be the perfect tonic to Washington’s anaemic offense that sputtered for the most part in 2015. Not surprisingly, the rotations shortened for the Wizards in the Playoffs and the only numbers called from the bench when it mattered were Ramon Sessions, Drew Gooden III and Otto Porter.

However, for most of the season the Wizards played the plodding duo of Marcin Gortat and Nene in the front court. Wall is a streaky shooter from deep at best, leaving just two capable three-point shooters on the court. Just like two is better than one, three is a lot better than two, and I’m not talking about analytics. Simply, if the Wizards can surround Wall with a trio of three-point threats and not just two, the team becomes substantially more potent offensively. Likewise, spreading the floor with shooters also opens up the lane for Marcin Gortat to operate in. In the playoffs Gortat’s true shooting percentage was 54.8 percent when he shared the floor with Nene. Without him? That figure skyrocketed to 70.6 percent. That’s why Kris Humphries, a very capable rebounder and mid-range shooter couldn’t find the court at all during the playoffs — he didn’t stretch the floor enough to warrant playing time. Unless you’re Reggie Evans-esque in the rebounding and hustle categories a four-man has to be versatile — and now, he has to be able to shoot threes too. Humphries has already talked about how he’s taking strides to become that player next season (he was 0-7 from deep in 2014-15), which hopefully means he can come back and provide some long-range support off the bench but the more pressing issue is what to do with Nene. The big Brazilian was in and out of the lineup for the Wizards all season with an array of ailments, but come Playoffs (for which they’d saved him) there wasn’t much magic to be had. He famously went 0-9 for two points and four rebounds in Games 1 and 2 of the Atlanta series and when both he and Gortat were on the floor together the results were less than stellar. What a difference a year makes.

Gortat has four years left on a $60 million deal and although he’s on the wrong side of 30, he and Wall have strong chemistry. On the other hand, Nene will make a cool $13 million next season, but is also on an expiring deal. Unless he can reinvent himself as a capable backup center (of which he’s been hesitant to commit to) then his value to the team may be limited.

While the speculation is rife regarding Paul Pierce’s impending retirement, return, or run to the Los Angeles Clippers (he has a player option for 2015-16), the youth movement in Washington is strong. Beyond John Wall, who capped off another brilliant campaign, a year where he became an All-Star starter and was named to the All-Second defensive team, he’s put an exclamation on his claim as one of the most exciting players in the NBA. Without him, the Wizards struggled but not as much as they would’ve had it not been for his backcourt running mate, Bradley Beal, who was huge in the postseason.

In the playoffs, Beal led the team at 23.4 points per game. He also averaged 5.5 boards and 4.6 assists per game. He only shot a hair over 40% in the postseason, but was the most voluminous attacker with more than 20 attempts per game while also leading the team with trips to the line at nearly six attempts per game. Besides that, Beal played some seriously tenacious hoops — particularly in the series against the Hawks. He crowded the sharp-shooting Kyle Korver repeatedly while also bombing in buckets at an ungodly rate. His ability to get to the basket and his desire to will the Wizards to victory was the number one reason the team could hang tight against the Hawks. Between them, Wall and Beal make the best starting backcourt in the Eastern Conference. League-wide, they’re only outmatched by the Splash Bros. in Oakland.

And then there’s Otto Porter, whose name reverberated around the phone booth more times than any other in the postseason. The Georgetown product is a hometown hero of sorts to the Washington faithful, and, after a slow beginning to the NBA landscape, he showed his ability to be a swiss-army knife for Randy Wittman. It took a threat of violence from Paul Pierce, but Otto Porter developed the requisite fire to become a key reserve in the lineup. Whether he can take that extra step and be the starter on this Wizards team that hopes to compete for a title next season remains to be seen.

The Wizards weren’t far off of making the Eastern Conference Finals for the first time in more than 30 years. The Wizards could use some more shooting — both big and small. A wing defender and shooter off the bench — like the Rasual Butler cameo early on in the season, but more consistent, would go a long way in strengthening the rotation. Sessions was a pleasant surprise after arriving mid season in a trade from Sacramento. He showed an ability to get to the basket and make the right pass, particularly in the absence of Wall. However, he also showed an ability to play alongside Wall if the Wizards want to go small and play faster — something that worked to varying degrees of success.

Kevin Seraphin is likely on his way out as he looks for a chance to showcase his skills elsewhere. Meanwhile, key rotation players Paul Pierce and Drew Gooden III (regardless of whether they return or not) are getting on. Washington owns both of picks in this year’s draft (19th and 49th) but whether they need another project to develop (ala Otto Porter) remains to be seen. Bringing Pierce in last season proved how much some playoff clout can help for a team with a realistic shot of winning a title. Some of the personnel just doesn’t quite fit. The Wizards could use a proper stretch-four if they truly want to embrace small-ball and bombing triples in 2015-16.

The narrative surrounding Kevin Durant‘s possible return home to D.C. when he becomes a free agent at the end of next season will swirl around — particularly if the Wizards fail to match their top four aspirations next year. But this is John Wall’s team — and their success rests with him.