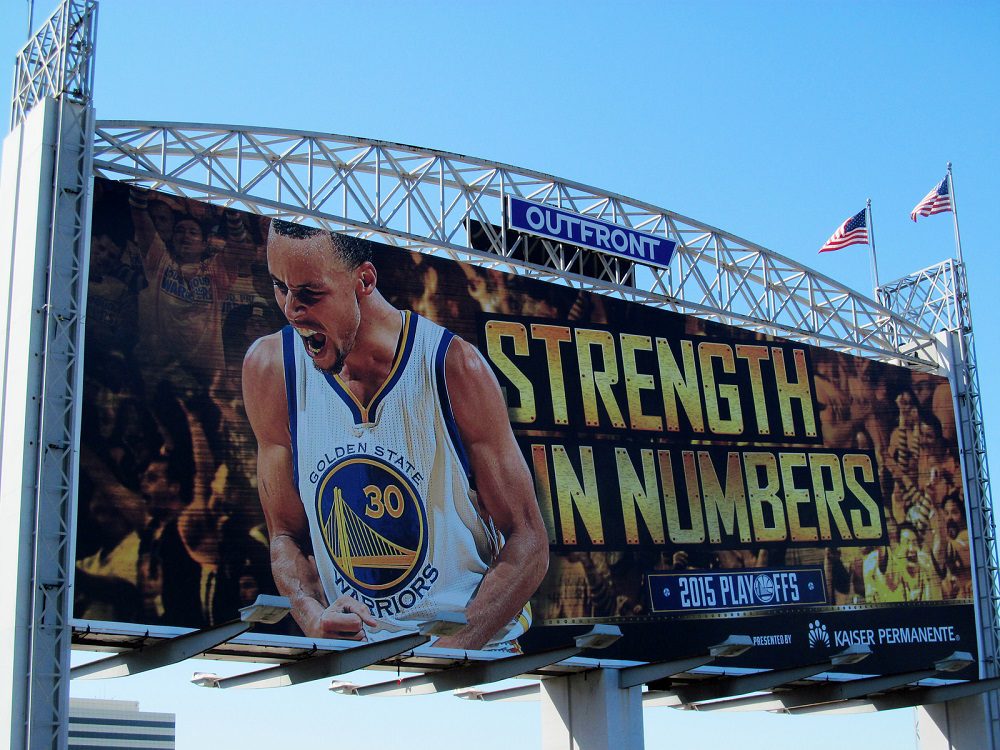 The Golden State Warriors outlasted the Houston Rockets in Game 5 of the West finals by a 104-90 final. Winning the series by a 4-1 margin, the Warriors have now reached the organization’s first NBA Finals since 1975. For the loyal Bay Area followers of this Golden State team, this year has truly been a long time coming. Stephen Curry scored 26 points on an uncharacteristic 7-for-21 display. His fellow Splash Brother, Klay Thompson, had 20 points and zero turnovers before suffering an ear injury. A critical factor was the aggression of Harrison Barnes. He took 20 shots and nailed down 24 points while making a series of athletic plays.

The Warriors also received their share of odd stat-lines. Andrew Bogut had 14 rebounds without scoring any points. Draymond Green was 3-for-15 shooting. Andre Iguodala went 0-for-4 on free throws. Regardless, the Warriors made up for these statistical oddities with dedicated energy. This collective energy was displayed at its greatest level concerning the defense played against James Harden. With his life turning into a sequence of disastrous mistakes during Game 5, Harden set an NBA-playoff record with 13 turnovers. He dropped just two points in the second half, and genuinely looked lost throughout Game 5. Credit Iguodala, Thompson, and the rest of the Warriors for shutting down Harden.

Bright spots for the Rockets were the efforts of Dwight Howard, Jason Terry, and Corey Brewer. Skeptics can rip Howard all they want for his attitude issues or off-the-court antics, but he poured his guts into this series. Howard totaled 18 points, 16 boards, and four blocked shots. His defensive presence and energetic commitment were present throughout these five games. Terry matched Howard’s heart with 16 points in 39 minutes of action. The 37-year-old still has loads of game left. Brewer also refused to quit as he dropped 16 points off the bench. Negatives for Houston start with Harden, but Josh Smith‘s 3-for-14 shooting display didn’t help. No one aside from Brewer had any impact off the bench.

Covering this series in its entirety, it’s hard to avoid summarizing this matchup as anything other than strange. The first two games were back-and-forth battles that could have gone either way. For whatever reason, Game 3 was a horribly sluggish effort by Houston where they were blown out at home. The Rockets responded in Game 4 with its best performance of the playoffs, only to once again falter in Game 5. However, attribute much of the Rockets’ unreliability to the performance of Golden State. They have a freakish mix of wing size. Thompson, Iguodala, Green, Barnes, and Shaun Livingston are all versatile defenders no shorter than 6-foot-6. That facet caused issues for Houston all series.

Furthermore, beyond having dynamic versatility on the perimeter, Golden State seems to lack detrimental egos. David Lee never complained when his role disappeared. Green has allowed his rise through the NBA to avoid reaching his head. He knows that despite his radical improvement, he’s not a player who requires constant touches. Iguodala accepted his bench role to the point in which he now thrives within it. Of course, the primary force behind Golden State is Curry, the legendary shooter with MVP hardware. But make no mistake, this squad is a wonderful mixture of size, versatility, and chemistry. The last word should be credited to Joe Lacob, Bob Myers, and the rest of Golden State’s management team for assembling the perfect balance of personalities. This brain trust wasn’t liked in Oakland when Monta Ellis left town in exchange for Bogut, but that and many other decisions have been proven to be correct.

As the Rockets head home, the Warriors now rest in preparation for the Cleveland Cavaliers. LeBron James will be playing in his fifth straight NBA Finals, and the inevitable discussion will concern James vs. Curry. The Warriors could throw as many as five defenders at James: Thompson, Barnes, Iguodala, Livingston, and Green could all realistically take turns on him. For a watch-worthy matchup, how about a rested Kyrie Irving against Curry. When Irving needs a blow, Matthew Dellavedova will attempt to be an irritant against Curry. Overall, this year’s NBA Finals should feature a blend of superstars and competitive balance.

With Golden State having homecourt advantage, the NBA Finals will begin in Oakland on Thursday, 6/4 at 9:00 pm ET.