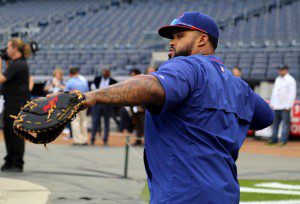 In the past eight-straight games whenever the Texas Rangers have erupted during the first inning, they tend to crush their opponent, cornering them in a way that exposes their vulnerabilities in an acrid haze. Apparently, someone failed to explain this to Kansas City Royals’ RHP Yordano Ventura, a starter whose fastball could be easily read from outer space by blind extraterrestrials not even familiar with the game of baseball. Based on his consecutive usage of the FB, both out of the zone and in the strike, one would assume Ventura is the type of man who solely sticks with the missionary position in the bedroom. Shin-Soo Choo saw it coming, as did Prince Fielder and Mitch Moreland – giving the Rangers an easy 1-0 lead at the top of the first.

Elvis Andrus would tap on another run as he sailed one out to right field, scoring Fielder on the sacrifice.

The Royals bats didn’t flow any better at the bottom of the first, mainly considering the fact that the Texas pitchers had thrown 16 consecutive scoreless innings and haven’t allowed a single earned run in the last 22 innings. Those numbers would push up by one after Wandy Rodriguez shut down KC batters in an effortless manner during his first trip to the bump that game.

During the second, Ventura walked Carlos Corporan after belting him with a pitch, allowed a Hanser Alberto single, and a double by Choo, who would score in the latter batters, bringing the Rangers up 4-0.

After three innings, Ventura’s day was done as he was shooed off the field after giving up six hits, walking two, and nailing a batter.

A bright spot for the Royals would come in the sixth after Jarrod Dyson led off with a double and was brought home by Mike Moustakas’ single, effectively killing the Rangers’ streak of 21 scoreless innings and 27 innings not allowing an earned run.

Trailing by three in the ninth, Royals’ Salvador Perez cracked a homer off of closer Shawn Tolleson with only one out (the first run Tolleson would allow since becoming the Rangers’ closer), but the two runs would all KC would score as Texas took the game 4-2 as Tolleson collected his seventh save.

Rangers’ RHP Colby Lewis (who has a 8.86 ERA in his last four starts) takes the mound for Texas as they look to close the series on Sunday afternoon against the Royals.