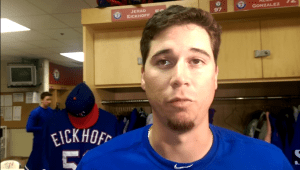 After throwing 102 pitches in 5.2 IP, Texas Rangers fans weren’t too sure if they would be seeing rookie pitcher Chi Chi Gonzalez grace the bottom of the ninth inning to close out the game against the Kansas City Royals on Friday evening. Would the man throw a complete game in only his second major league start? The bullpen was quiet, but still commentators continued to ponder in the form of colorful tweets and language about the rookie. At the bottom of the inning, Gonzalez paced himself as he emerged from the dugout, eyes focused on the mound during his strut to Texas Rangers history.

It helped that the bats that backed up Chi-Chi had given him enough breathing room from the get-go. Delino DeShields led off the first with a triple, as the Royals outfield scrambled to make the play and get the out, but were unable to perform… well… correctly. Shin Soo Choo scored DeShields with a tapper and the visiting team had a 1-0 lead in only four pitches off of RHP Edinson Volquez.

First baseman Mitch Moreland expanded the lead to 2-0 at the top of the sixth after slamming a vividly ear-splitting homer, his sixth of the year, followed by a Robinson Chirinos two-run single. The Royals then decided it was time for Volquez, who gave up four runs and six hits, to call it a night.

Gonzalez showed absolutely no sign of fatigue as he made his way to the bump for that final inning as all of Kauffman Stadium watched him, festering in their own silence. It was known that manager Jeff Banister didn’t want to overwork his rookie, especially in only his second game in the majors, but Gonzalez wasn’t having any of it. He handed the Royals their eighth loss in 10 games and put the Rangers three games over .500, placing them right behind the first place Houston Astros in the AL West.

LHP Wandy Rodriguez looks to keep the magic alive for the Rangers as he takes the mount on Saturday afternoon against Royals RHP Yordano Ventura.