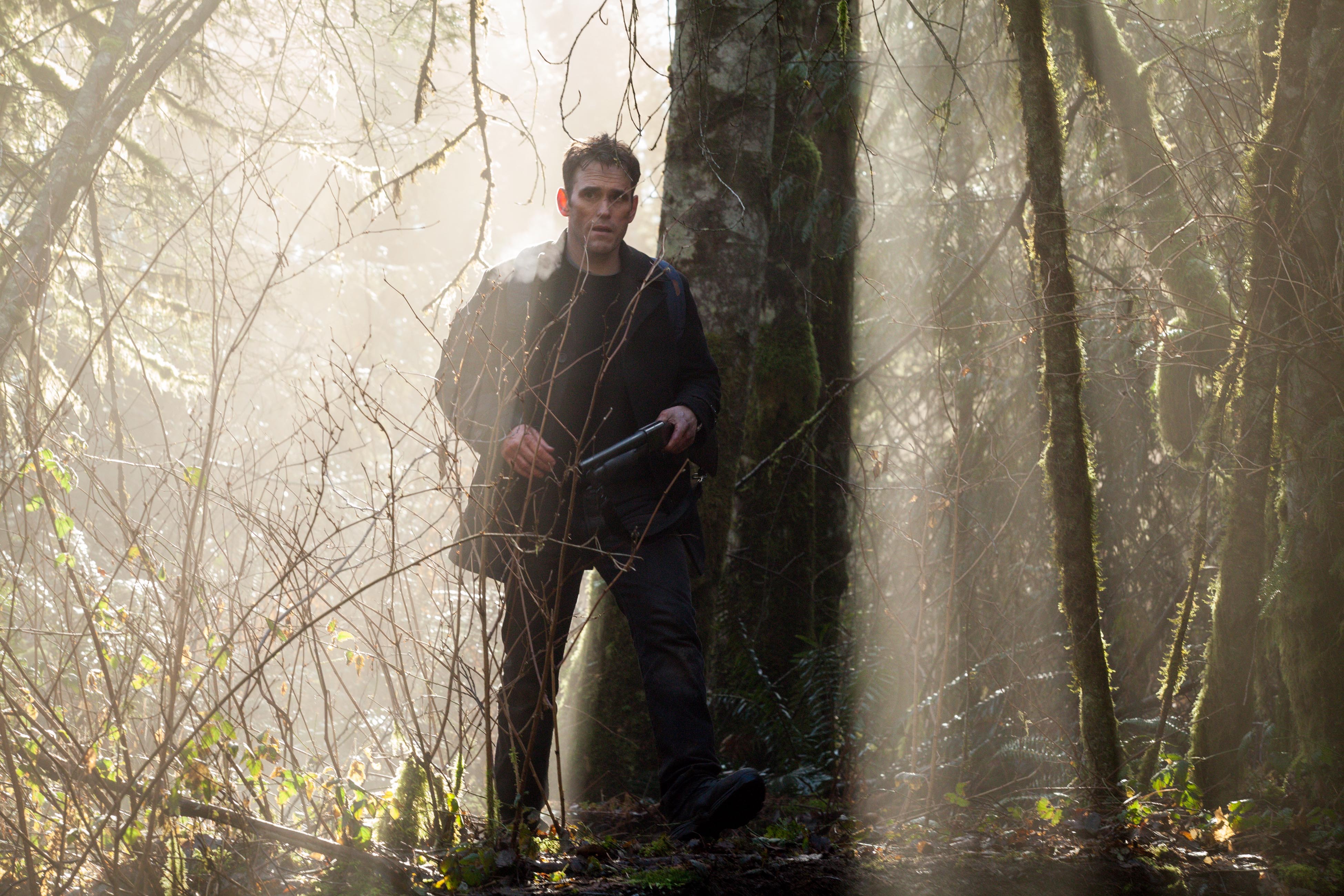 Burke wakes up in a delirious state. Confused as to his whereabouts, the agent fires his gun into the night multiple times after hearing a sound. Each shots misses before he receives a substantial cut from an unknown assailant. The scene shifts to Ben and his classmate walking home following what’s assumed to be a date. She seals the event with a kiss, and it seems obvious that her mission in Wayward Pines is to win over the teenager’s heart. This is a rapid progression since Ben seems unfulfilled when his mother tells him they could be returning to Seattle soon. Before meeting this girl, Ben couldn’t wait to escape Wayward Pines.

The next morning, Ben is defensive about his friends and new love interest. Utilizing her motherly instincts, Theresa tries to protect him from the community. Predictably, he reacts unfavorably with dismay. Burke has survived the night. We learn this truth in a brief scene where Burke has a map, apparently far off from the strange community that’s overtaken his life. Wayward Pines shifts back to the Ben storyline. Nearly every classmate at his school is providing him with pleasantries and positivity. The dorky teen is unaccustomed to being the recipient of such behavior.

Theresa meets with a new character, Big Bill, because of a letter she received about a job prospect. The nicknamed man is a peculiar character with ceaseless energy for his age. Wayward Pines turns back to Ben. He enter an ominously white room, almost blindingly white, with two other students facing orientation. Mrs. Fisher enters and closes the door. The lights dim as she plays a video to her students. As she welcomes them, Burke continues his journey. Unfortunately, we receive less of Burke during much of this episode, and more of Ben. I’ve voiced in the past how Ben is the prototypical dull, dorky teen placed in the middle of an exceedingly unnecessary amount of TV shows.

Theresa visits the hospital, meeting another new character, Wayne Johnson, along the way. He’s her first job assignment with the goal being to give him a home. Like Burke was earlier in Wayward Pines, Wayne is consumed by confusion. He says he saw “something awful” following his accident. As Theresa inches closer toward Wayne, fully knowing that ears and eyes are ubiquitous, Pam lurks from behind. She pops in before the newly acquainted pair can finish their secret conversation. Back to Mrs. Fisher’s lecture and presentation. She shows a picture of a creature we witnessed at the end of episode four. Due to a “series of genetic mutations or aberrations,” we learn that these creatures of beastly strength are present in Wayward Pines.

Sadly for Burke, he’s trapped in the wilderness with these monsters, at least temporarily. Multiple questions arise with the revelations of these “aberrations.” As Ben mentions, it’s odd that these forces exist in the wild, in society at large, potentially, yet he’s never come across one in person. Furthering the façade of her new role, Theresa takes Wayne to his new house. She scopes the scene for cameras, looking for any sliver of freedom where she and Wayne can talk truth. The amount of scene shifting in this installment of Wayward Pines is a headache. One moment it’s Theresa, the next it’s Burke being lost, and far too often we’re stuck with boring Ben and his freaky teacher.

Mrs. Fisher states that the year is “4028,” and quarters are the last indicator we have of civilization. This revelation comes with comedy more than drama. Wayward Pines has done a masterful job of balancing suspense and intrigue, but Ben and Mrs. Fisher don’t strike me as interesting characters. It’s difficult to back this major revelation when the character revealing it, and the individual hearing it, are both dull. Nevertheless, because of its importance, it’s a storyline we must take into account. Wayne tells Theresa that he was once in a chamber full of people. They were seemingly being experimented on, and the actions seen are weighing heavily on Wayne’s psyche.

According to Mrs. Fisher, a scientist named David Pilcher predicted that the aberrations, or “abbies” for short, would take over the world due to evolution. With this human downfall in mind, he chose a special community, one where people would have amnesia-filled accidents, be placed in hibernation chambers, and then put in the town of Wayward Pines 2,000 years later. Big enough plot point for you? The plausible nature or fan appreciation of this show facet can be questioned and debated, but at least we have an answer. Sort of. I say that because with this information, multiple additional questions arrive. And the offered answer isn’t satisfying in the slightest. Is it realistic that strong creatures would overtake the militaristically minded United States? Put bluntly, couldn’t we just bomb them? An aberration extinction seems more likely than an aberration takeover.

A helicopter lowers in the presence of Burke. Stepping out is Dr. Jenkins, the Wayward Pines psychiatrist. There’s just one thing: Dr. Jenkins isn’t Dr. Jenkins, he’s David Pilcher! OH SNAP. “So you’re David Pilcher?” That’s the first question asked by Burke before turning a gun on the scientist. The nutty individual states how the people of Wayward Pines are all that’s left of civilization. The scene cuts back to Mrs. Fisher’s orientation where another important point is stated. All of the Pilcher, aberrations, and 4028 information isn’t intended for adults. Ben and his classmates, the future of mankind, are the representations of the new world. Adults in this community aren’t supposed to acquire this knowledge.

Digging through the paperwork at her job, Theresa sees a file on herself as a client. Everyone in Wayward Pines is there for a specific reason. No, it’s not a social experiment focused on the actions of Burke, a decently logical explanation through four episodes. Rather, the purpose of these individuals is to save mankind from doom. An insightful USA Today article summarizes the numerous issues in this plotting decision, most of which center around the logic behind Pilcher’s thought process. Why freeze people for 2,000 years? Why choose an Idaho town as the centerpiece of humanity’s saving grounds? How did the aberrations end up taking over, and why are they now only living on the outskirts of civilization instead of ruling it? Lastly, when Pilcher was still known as Dr. Jenkins, didn’t he visit the headquarters where Burke works earlier in the series? If Wayward Pines is the last shred of humanity, how did he travel back to the modern world that isn’t even supposed to exist?

Count me as a fan of Wayward Pines for its entertainment value, but also count me as unenthused by episode five’s developments. Focusing on Ben as a primary character is a mistake. Many of Pilcher’s ideas will provoke mockery or questioning more than acceptance. Most importantly, Wayward Pines has done a passing of the torch, so to speak, from Burke to Ben. Burke is an old world adult unprepared for the truth, Ben is a first generation student keen on saving his fellow people. Well, we’ve officially fallen off the rails. So much for a promising series.