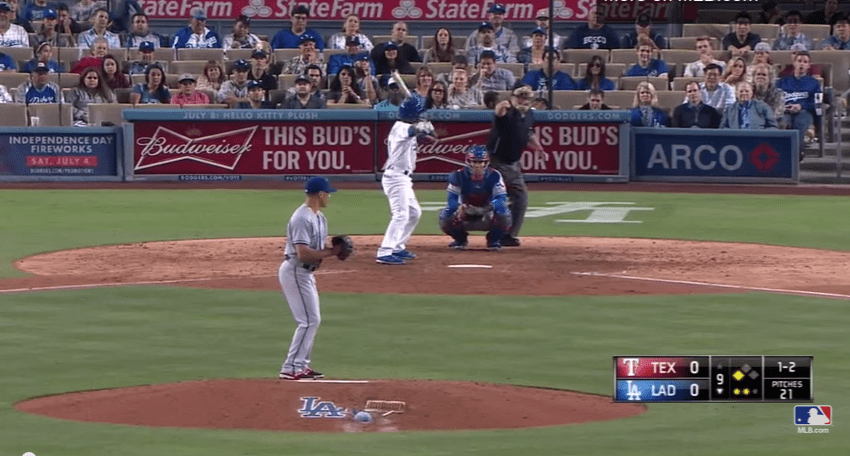 I was once seeing this guy who didn’t understand the complexities of major league baseball who had asked me to explain what exactly a “balk” is. After a lengthy monologue that included many over-dramatic hand gestures (including one ‘suck it’ motion) he still was confused, so I ended the exhausting conversation with a simple “it would be easier to describe the color green to Stevie Wonder.”

Not that the man in question was an idiot (meh), it’s just that it’s probably easier to translate Leo Tolstoy’s “Anna Karenina” into Farsi without even knowing a single word of Farsi.

During Thursday night’s game against the Los Angeles Dodgers, Texas Rangers reliever Keone Kela made a massive mistake at the bottom of the ninth that cost his team the entire game: he flinched.

With the game tied 0-0 and one out away from going into extra innings, Kela was looking to strike out Jimmy Rollins while pinch runner Kike Hernandez eyed home carefully from third base. Kela barely twitched his shoulder when Hernandez appeared to belt off third in an attempt to steal home, resulting in the devastating 1-0 loss for the visiting team.

I have seen titanium statues flinch more than Kela did.

But rules are rules.

There is a vast number of illegal moves that a baseball pitcher can make which results in a balk and causes a dead ball. Some of which include:

– feinting a throw to an unoccupied base
– feinting a throw to first base without completing the throw (which is legal when done to second or third base)
– dropping the ball when on the rubber
– pitches while not facing the batter
– If the pitcher flutters his eyelashes, flares his nostrils, or makes eye contact with a bird.

Okay, that last one isn’t a balk, but the complexities of numerous balks range from justifiable (unnecessarily delays a game), to obscure (separates hands after bringing them together unless when making the pitch or throwing the ball).

Rangers look to redeem themselves in Chicago against the White Sox on Friday evening.