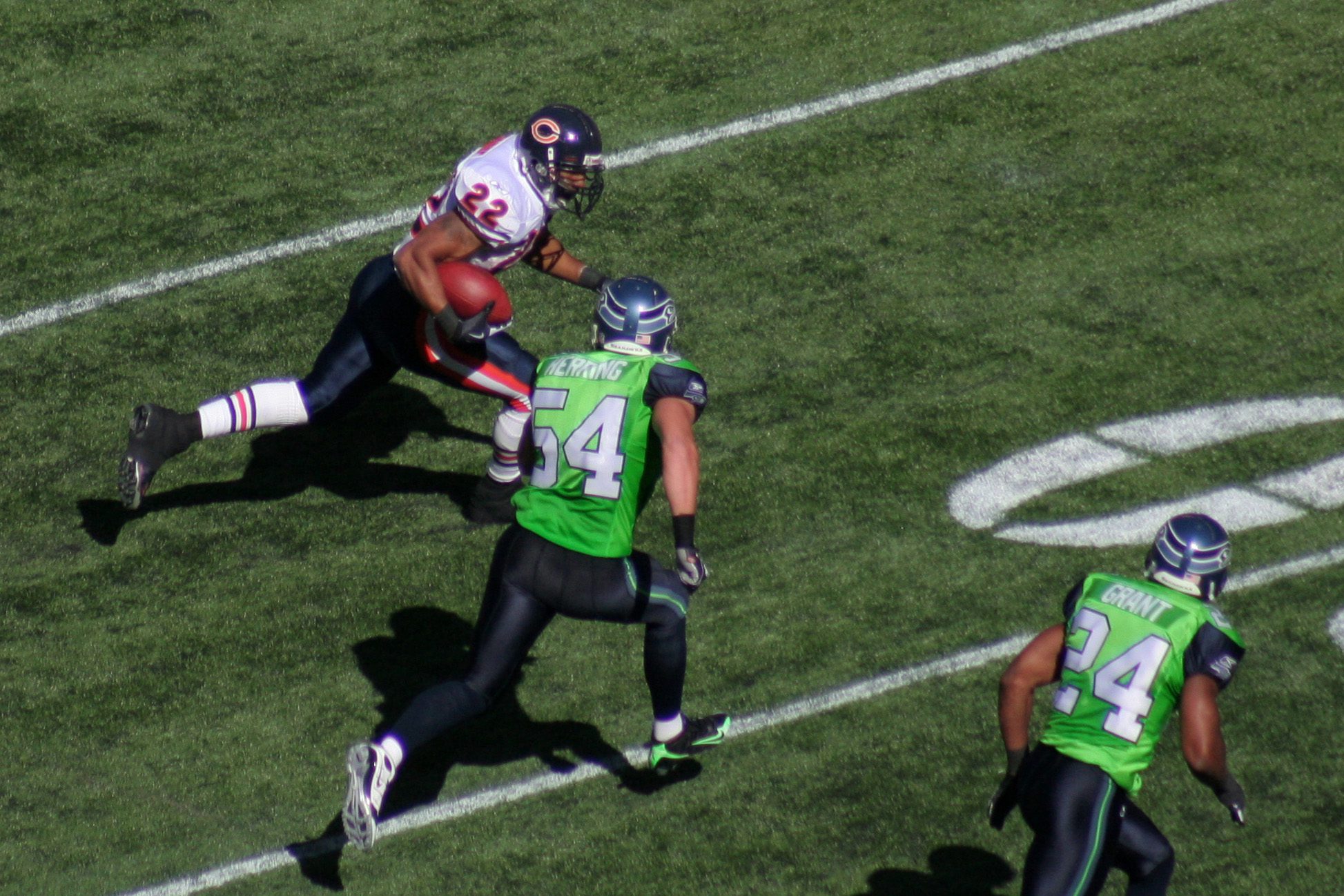 Before I even list names at this position, you must know how I feel about the running back situation in the entire NFL. It’s a crap shoot! In the last five seasons there has been little to no consistency with players who have outstanding seasons one year and fart out the next. This list will change before you finish reading it because this is a PASSING league. When is the last time you saw a running back go in the first two rounds of an NFL draft? Exactly! Stop taking Adrian Peterson and LeSean McCoy first overall, the value isn’t there! My longtime readers know I believe the key to winning in fantasy isn’t having the highest scoring players but owning the most consistent players. Running back in fantasy is just the opposite.

10. Jamaal Charles
Jamaal Charles is the perfect back for Andy Reid‘s offense. Andy Reid‘s offense is the perfect scheme for Charles. Only problem is Charles is susceptible to injury due to his small size and willingness to run in between the tackles. In 2013, Charles finished the season as the highest scoring fantasy player overall. The reason being that he finally put together a full season without injury. He has the potential to top everyone on this list as long as he can stay healthy. And the last two seasons will scare guys into letting him drop way further than his real worth in fantasy drafts.

9. DeMarco Murray
We will never know the true specs of the contract offered to DeMarco Murray by the Dallas Cowboys but one can only imagine. My only question to Murray is this: How could you let money make you walk from that impenetrable offensive line? He could have become a back to back 2,000 yard rusher. I could run behind that line for positive yardage. Ask LeSean McCoy if you’ll get the same amount of touches that you did in Dallas. Not going to happen big guy. His name alone puts him on the list, nothing more.

8. Mark Ingram
Here is my Dark horse running back of the year. The guy that, in my own drafts I will reach to get. After his breakout year that everyone assumed would never happen, Mark Ingram will have a monstrous season. The New Orleans Saints are notorious for a “running back by committee” approach but last season Ingram cemented himself as the number back one for that team. And the off season moves the team has made show that the feeling is mutual. With the addition of C.J. Spiller in that combustible offense, Ingram is geared for a repeat season if not better than last. Definitely one of my top draft steals this season.

7. Le’Veon Bell
It’s amazing what three games will do to a guy’s potential. The three game suspension handed down to Le’Veon Bell is one game short of a quarter of the season and most fantasy league playoffs begin in week 13. So you would be drafting a back high to only have him for ten fantasy games (9 including the bye). That’s a big deal in today’s NFL. If he was not suspended to begin the season, he would be number one on this list. Hell, I almost put him there anyway but I’m risky, not insane. His skill set is unmatched at his position and he has turned into another receiving weapon for “Big” Ben Roethlisberger. The three game absence will obviously hamper his fantasy point total, but he will still be one of the top backs when all is said and done.

6. Arian Foster
So skilled as a back, and a very smart player all around. On a defense first team with below average quarterbacks on the roster, game management will be key for the Houston Texans. For the game to be managed in a successful manner, an above-average back with a perfect mixture of speed and power is essential. That’s Arian Foster in a nutshell. A back filled with physical and mental talent, the only problem is his spotty injury record. If this guy could ever put a whole 16 game season together, he would be in the same category as Marshawn Lynch. But he can’t so he is outside my top ten.

5. LeSean McCoy
Shady McCoy is the best all around back in the NFL. He is a wide receiver trapped in a running back’s body making him outrageously valuable in PPR even with the move from Philadelphia to Buffalo. Bills head coach Rex Ryan loves to pound the ball on offense, while this isn’t favorable to McCoy‘s speedy running style, he has veteran Ironman back in Fred Taylor to lighten the load. Unfortunately, no running back has ever had a successful fantasy season under a Rex Ryan coached team but Shady is superhuman. He can make something out of nothing.

4. Adrian Peterson
If Peterson plays for the Minnesota Vikings once the season starts, he has to be inserted in the top ten. He is comfortable behind the veteran O-line there, and sure to be elusive as ever after missing most of the season last year. His body is a year younger and one year for a running back is the same in dog years. Don’t waste your first round pick on him but the next few rounds he will hold some value. Also, if you combined Jerick McKinnon and Matt Asiata‘s stats from last year they are the numbers of a top ten running back. Norv Turner loves to run the ball at the goaline and hasn’t had a back like Peterson since LaDainian Tomlinson. We all remember what happened there. High, high upside.

3. Eddie Lacy
Lacy is the perfect complimentary piece to a strong passing attack such as that of the Green Bay Packers. A stout, aggressive runner always looking to pile drive a defender into the ground. The change of gears to the brutal running style of Lacy will make for tired defenses after dealing with a hurry up, no huddle offense. A tired defense will lead to long touchdown runs for Lacey all year. He has potential to top the two backs ahead of him on this list once the dust settles.

2. Marshawn Lynch
Beast mode. There is really nothing else to say other than that. The guy is an absolute freight train. Plus he is money in the red zone. Only problem is he plays for Pete Carroll who clearly has no idea what he has in Marshawn Lynch. Otherwise, Lynch would be head and shoulders above any back on this list. In the beginning of this article I said not to take any running backs in the first round and I stand by it. The only thing that would make me think differently would be Marshawn Lynch going to another team.

1. Matt Forte
Broke the record for most receptions by a running back in a season with 102. 102 catches?! If your in a PPR league he was the number one guy overall last year. Just on catches alone he got you 102 points. As far as consistency goes Forte is the Mecca. Although his touch numbers were through the roof last season, he will be 30 at the start of this football season which worries me none. He has been durable in the past and will continue to be so for an ample amount of touches in a John Fox coached team. As long as Forte can keep himself healthy for 16 games, he will keep himself atop the running back list.