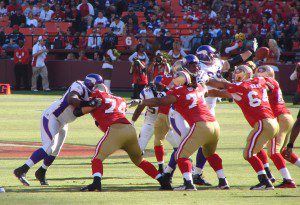 It has been a tumultuous rollercoaster for our San Francisco 49ers’ offseason, suffering drastic setbacks and misfortune from both free agency departures and early retirements, preceding the Jim Harbaugh era.

The list includes the following (to name a handful):

With Jim Tomsula at the helm, the 49ers’ are in dire position to transition into a completely different unit on both sides of the field; especially the O-line. According to Matt Barrows of the Sacramento Bee, the zone-blocking scheme will be re-implemented into the team’s overall playbook, along with their vintage power-blocking approach. Instituting the fact that Tomsula and company wants to play with more of an up-tempo offense, emulating a bit of Chip Kelly’s (Philadelphia Eagles) offensive philosophy. Zone-blocking does demand a great deal of lateral movement on the body, without the consistency, creating open lanes will pose tremendous issues for the 49ers’ albeit loaded backfield. Fitness, agility, and pure athletic ability are the notable attributes that Tomsula needs to instill into his revamped interior line. Tomsula believes mixing play-calls with both power and zone-blocking should play to the Niners’ advantage; if used correctly and efficiently.

Contrastingly, now the head coach of the Michigan Wolverines, Harbaugh had a knack for having sheer size trump all within the trenches of the NFL. Surprisingly enough, his 49er physical unit (beefy) took the “red and gold” to three consecutive NFC championships and one Super Bowl appearance. During his tenure alongside San Francisco, his systematic offense (Greg Roman included) solely consisted of power running and blocking. A great deal of that success comes from Iupati and Staley’s ability to create open running lanes for Gore to capitalize on, by the left side of scrimmage. Without the luxury of Iupati’s astounding run-blocking ability, Tomsula desperately needs a player to fill that important void; mainly for power-run calls.

Making matters even worse, Anthony Davis’s unexpected retirement brings uncertainty and vulnerability to the 49ers’ at right tackle position. Free-agent addition (RT) Erik Pears from the Buffalo Bills is in position to claim that role; if competition permits. Also considering the fact, that Pears’ struggled tremendously with the run-blocking approach in Buffalo, Tomsula may decide to complement his O-line with a couple switches at the guard position. The free agency market still has Evan Mathis (G), on the map if the Niners’ are looking for a critical upgrade at guard. The (2014) third-round pick out of Clemson, Brandon Thomas (G), seems to be making a case at OTA’s to confirm his role at left guard besides pro-bowler Joe Staley (LT). Primarily speaking, there are multiple players who could acquire the job at right guard (Erik Pears, Trent Brown, Marcus Martin, Andrew Tiller, Ian Silberman). Daniel Kilgore and Marcus Martin are the most viable options at center, with Joe Looney and Dillon Farrell as backup. Staley is slated to hold the fort at left tackle and Boone should be the preferred candidate for the right tackle position over Pears in terms of experience.

Below are two possibilities of a starting lineup:

After spending five eventful seasons with the Washington Redskins, Chris Foerster has returned to the west coast to be in charge of O-line duties under the exuberant Tomsula. Foerster left the Niners’ in the year 2009 (Mike Nolan era) to pursue other opportunities in Washington under Mike Shanahan. Once Bill Callahan inked the deal with the Redskins to become their new offensive line coach, Foerster took matters into his own hands and explored other potential coaching possibilities. According to Matt Maiocco of the CSN BAY AREA, Foerster led one of the top leading rush attacks in the NFL league in 2012 and ’13 under Shanahan’s staff and Heisman Trophy starting quarterback Robert Griffin III.

Foerster and Tomsula are determined to deploy zone-blocking before the start of the 2015 regular season. Rigorous conditioning is key if the O-line has a shot to master the zone stretch-technique. Stamina and quickness are typically the main staples of concern at the moment. If Tomsula’s interior line can maintain the incessant pace, just imagine the possibilities on the offensive end. Ultimately, the mixture of options at play-calling, either zone or power will give the 49ers a chance to keep opposing defenses on their heels at all times. Carlos Hyde (RB) is also more accustomed to zone-running which is an immediate plus for the former Ohio State Buckeye.

The Niners predominantly ran power for the past couple of years under Harbaugh, but due to all the instrumental roster alterations, adjustments need to be made: it is inevitable.