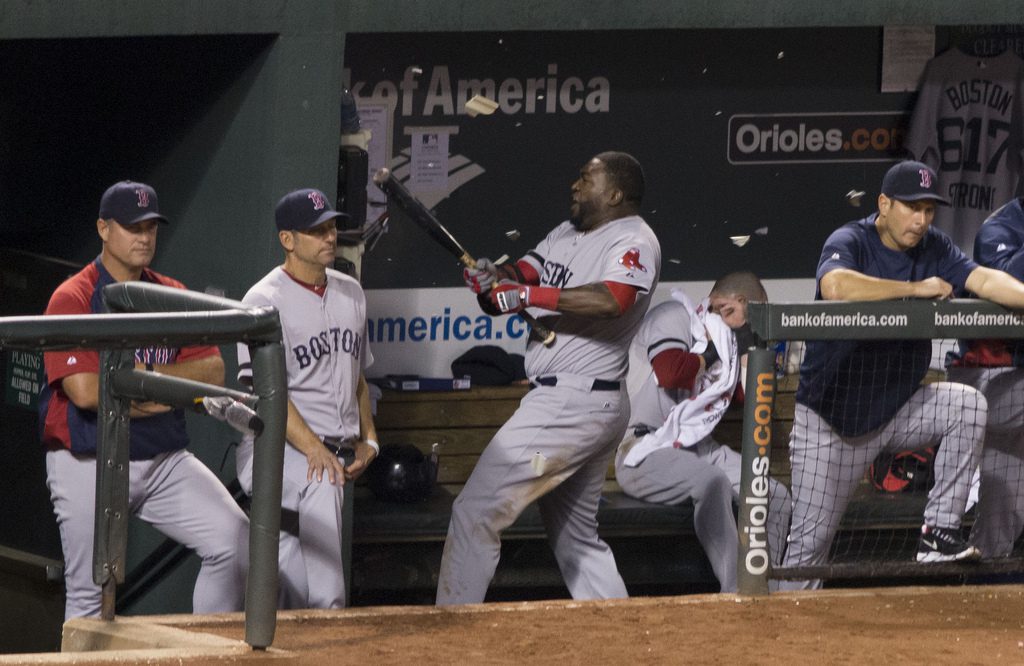 David Ortiz had fun with local media this week while speaking about playing first base on a semi-regular basis for the Boston Red Sox. Without quoting Big Papi directly, he basically chuckled and said “hell no.” Hell no, David?

This is not a surprising response due to Ortiz never being one to avoid a question from media or one to beat around the bush. In any other season it wouldn’t even be a discussion, but this season is different for the Red Sox and is certainly at a turning point.

David Ortiz is currently hitting .128 against left-handed starting pitching. That is atrocious for a team’s designated hitter. Even worse, he is 3-for-41 against left-handed relief pitchers. That’s a batting average of .075! How can a player putting up those type of numbers dictate where and when he plays? With the way the Red Sox play with him at first base and Hanley Ramirez at DH, or with Ortiz out of the lineup altogether, it’s hard to ignore.

The majority of the first half of the season for the Boston Red Sox has been underwhelming. As of late they are starting to string wins together and have won the last four series including two of two from the Florida Marlins. Heading into a weekend series with New York Yankees over this past weekend and the Sox could pull within three games of the division by the MLB All-Star break, which would be close to a miracle if it happened (It didn’t). The last thing the Red Sox need is a veteran to start chuckling at real possibilities to the media. Especially a veteran who has been struggling at the plate like never before in his career.

When Hanley Ramirez signed with the Sox in the offseason, every baseball fan knew he would not last in left field at Fenway. It didn’t even take half the season for a change to be made. Only issue is Hanley is hitting the cover off the ball and is obviously extremely gifted at the plate. On any other American League team this is an excellent problem to have because the easy fix would be to make Hanley the DH. The American League team I write about has arguably the best designated hitter of all-time in Ortiz. But Ortiz’s average against lefties supports the idea that Ramirez is the right choice at DH for the Red Sox lineup.

If John Farrell were to DH, it leaves a vacant spot in left field. Usually All-Star utility man Brock Holt would fill in valiantly, but with Dustin Pedroia on the DL, Holt is needed in the infield. Alejandro De Aza has been hitting the ball well and the Red Sox are 7-2 with De Aza in the starting lineup and Ramirez’s batting average is up almost 100 points when he is at the DH. Only problem is there is no way a 39-year-old who has DHed the last decade can be your everyday first baseman, but they can solve that problem too.

Once Pedroia returns to the lineup that would free up Holt from second base, giving him true utility power again. So on days you face righty pitching you start Ortiz at first base, De Aza in left field and Ramirez at DH. Games against lefties you can give Ortiz the option: ride the pine, or play first base. You have that luxury because Holt can play first against lefties. Ortiz cannot DH games against left-handed starters, the numbers are overwhelmingly against him. Whether he wants too or not he needs to let Hanley assume the big role at DH. For his team!

All of this would be pretty clear-cut for another team but not Boston’s ball club. A mountain made out if a mole hill just in time for skipper Farrell to have to confront these comments made by Ortiz the weekend before the All-Star break. Certainly something to watch after the break. What will Farrell do with Ortiz now that he has made clear he has no interest in helping his team in the short-term? And to think this all could have been avoided with a simple cliché: “I’ll do what is best for my team.”

Eight words that would have given me nothing to write about.