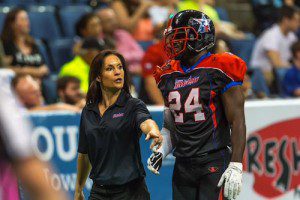 The news the Cardinals and Bruce Arians have added Jen Welter as a coaching intern for camp and the preseason has created, not surprisingly, major nationwide buzz. Hiring the first female NFL coach tends to do that. Mostly the reaction has been positive. But Arians didn’t do it for the reaction.

Arians cares about the idea of opening a door or bringing down a barrier. He said as much. He did not have to do this, however. He noted back in March players would accept anyone who would be able to coach them to better play, including a woman. It got a reaction then, but that’s as far as it had to go. At the time, Arians didn’t have anyone in mind (although he was aware of the one-time work of Dot Murphy coaching receivers at Hinds Community College in Mississippi.) Even when he heard from Texas Revolution coach Devin Wyman suggesting Welter, Arians didn’t have to do anything, and again after he brought her in for a visit during an OTA. Arizona Cardinals