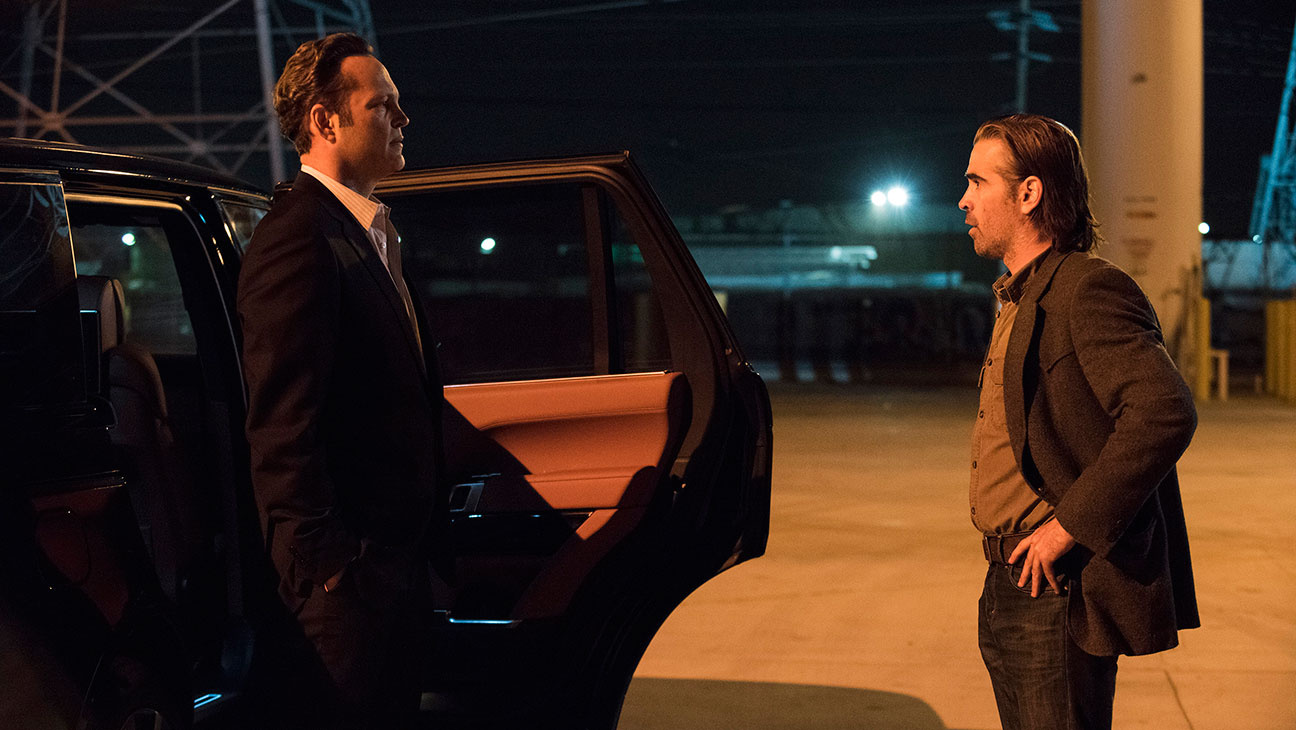 True Detective has experienced a bumpy sophomore season. That profoundly striking dialogue from Season 1, that unspeakable depravity, hasn’t made the same impact during Season 2. Despite Colin Farrell’s acting chops and a necessarily dark tone, True Detective has misfired on various plot points. The role of Caspere/his death? Mishandled. Vince Vaughn as a villain? Not quite a worthy HBO bad guy even with Vaughn’s commanding effort. This crew of detectives? Acceptable, although Season 1’s Rust/Marty duo makes this core look amateurish. It goes without saying that Season 2’s directing and overall camerawork hasn’t been particularly sharp.

Don’t allow my reasonable negativity to set the tone for this review, however, or for True Detective as a whole. Unlike the slew of doubters hating on Pizzolatto’s baby, I’ve enjoyed this season. Its been better than the majority of what’s poisoning our TV screens. Farrell has killed it in the lead role, the opening intro to the show is fittingly creepy enough to give the devil chills, and the viewership should translate into a Season 3. Here’s a great Grantland article on what Season 3 should include, most of which I find agreeable.

Without further straying from the inevitable, let’s dive into True Detective‘s Season 2 finale. We open with Ray and Ani in bed. She tells Ray about being held in captivity during childhood. Ani reveals that she was lured by a predator, a man who hid his ulterior motives well. Ani’s monologue is the type of polarizing content this season has featured. Same goes for Farrell’s monologue. Some will note their powerful method of revealing a past dose of pain, others will believe each story is too slowly told and comes across as a swing-and-miss. The scene surely takes up more time than it should.

Frank and Jordan discuss the future. Frank wants her to leave, she wants to stay, same old nonsense between the two. True Detective is crazily slow during its opening 15 minutes. We have 90 on deck, so more action has to be awaiting, but this dull of a beginning isn’t promising. The pair talk about meeting in two weeks, even nailing down their outfits for the future date. I can feel those hoping for a redeeming finale letting out a collective sigh.

We see Paul in his body bag almost 20 minutes in. Ray learns that Taylor Kitsch’s character has been killed, and the man who calls Ray is the man who killed Paul! How poetically twisted. Ray’s vengeance might be the only component capable of saving True Detective. “That guy’s a fag, right?” That’s the justification provided for gunning down Paul. Ray and Ani both take the news hard. Will they each survive the episode, or will the pair end up like Paul?

The new lovers (just kidding, kind of) plot how to implement vengeance. Death to all on behalf of Paul! That has a nice ring to it, that is, only if the ones meeting death are the animal masked, rich guy weirdos responsible for kidnapping, raping, and murdering the innocent. Frank learns that the mayor is dead. His lifeless body floats in his own pool. The vibe and momentum of the finale have officially picked up.

Ray and Ani approach a house with their guns drawn. Upon entry, they see the head of a bird, and a room equipped with a lap top, weaponry, and various other unsettling items. A handcuffed girl is in the house. She and her brother had been orphaned years ago. Caspere took them in and seemingly abused the kids over a lengthy period. Ray leaves Ani behind with the girl, someone who can provide critical testimony, while Farrell’s character goes on the hunt.

Frank resembles his Swingers days with sunglasses and an open road ahead of him. “When the lights go out, that’s me.” Frank’s way of threatening an enemy. Ani puts the kidnapped girl on a bus out of town. After the girl departs, True Detective shifts back to Frank. He tells a female employee that he is leaving the club to her, and that Ray should be rolling through with the need to escape to Mexico. Ray rocks a cowboy hat and shades, a cigarette in his mouth, and vengeful violence on his mind.

As he goes up an escalator, Ray sees his wanted picture on the TV. Framed and on the run, we can only hope Ray eliminates the scum of the earth before being caught or fleeing. Ray confronts the guy who drilled him with a shotgun. After all the audience’s speculation on the masked man’s identity, it turns out to be the other half of the kidnapped brother/sister duo. The mask was Caspere’s, and the kid is the one who eliminated this season’s much discussed, but rarely seen, individual, Caspere.

“Have we met?” Frank’s question for Ani as they get acquainted. Frank tells the detective to relay his wife a message if he’s unable to do so himself. The scene turns to Frank and Ray discussing an escape. Before skipping town, though, blood must be shed. Vaughn begins killing it on a rather high scale in this finale. His dialogue is cleaner, and Vaughn’s delivery of his lines feels more authentic here than in past episodes. My problem has never been with Vaughn’s acting, its been with the way Pizzolatto has presented the character. Those problems aren’t existent in the finale.

What’s more important, however, is the vengeance on the horizon. Frank tells Ray that the bunker where some of the bad city men and rich guys hide out isn’t exactly a convenient location. The detectives can do their business and avoid capture before reinforcements arrive. Meanwhile, Ani finds Caspere’s psychiatrist to be dead. His wrists had been slashed.

Frank guns down a pair of muscle men. The pair turns into a significantly higher number, and quickly. Frank is in full Rambo mode, slaying the filth in his path, conducting his brand of torment without remorse or hesitation. He even has a gas mask for the chaos in the air. Props to True Detective on this one. Following the bloodbath, Frank and Ray shake hands before going their separate ways. For now, that is.

Ray smiles, maybe for the first time all season, while on the phone with Ani. Interfering with his destination are thoughts of his son. Ray exits the highway, a decision that gives the audience a bad feeling. He uses binoculars to obverse his son from a distance before getting on foot. As Ray walks, a black van drives behind him. Ray sees that his son kept the Velcoro family badge and the duo salute each other in one of the most positive, happy moments of True Detective. Still, it doesn’t seem like Ray is safe. He finds a tracking device under his car.

Armed with this information, Ray waits by his vehicle. A cigarette puff precedes contemplation. Once Ray drives, the car is on his ass. We turn to Frank, a man in a terrible place. He’s kidnapped by a slew of cartel members. There doesn’t seem to be any logical reason to believe Frank can escape death. Quickly moving in this finale, we see Ani with a new look. Black, shorter hair, and readiness for the future. Ray tells her he won’t be able to meet Ani in time. Ray lies to Ani, telling her that he’ll join her at a later date, something he knows is completely untrue.

Frank is driven into the desert. As mentioned earlier, Frank probably won’t be able to dodge this situation. Ray gives his son a message, one we presume is a final message. “You’re better than me” are some of his words to the boy. It’s nice how True Detective gave Farrell one final strong moment with his kid. The momentum intensifies when Ray speeds up to avoid those pursuing him. A tumble may have caused his weaponry to lessen, but we like Ray’s chances in a gun fight.

When one of the goons wants Frank’s suit, Vaughn refuses. This leads to Frank being deeply stabbed. The scuffle was a ploy to see if Frank could suffer the injury and still make it back to town. Elsewhere, Ray is in the hills armed and loaded. Many men, and I mean many men, are on his tail. Ray could use Ani and Paul right about now. Is it possible that both Ray and Frank won’t survive the finale? Seems likely. Blood continues to drop as Frank walks. He sees an illusion of his father, verbally bashing him as he did during Frank’s childhood. Props to Pizzolatto on putting Vaughn in a position to reveal tenacity.

The men close in on Ray. They have better weapons and protection than Ray, but they aren’t Colin Farrell! The man who welcomes judgment balances eliminating those after him while trekking forward. After looking to the sky, knowing it will be his final moment on earth, Ray jumps into the center of a one-sided battle. The math isn’t right for Ray, there are too many bad guys near, and he genuinely appears ready for death. Ray is laced with bullets. Paul is gone. Ray is gone. Frank is dying. The only one to escape is Ani, and when Ray was asked where she is by one of the gunmen, Ray had earlier replied that she was in a “better place.”

I have a feeling that Frank’s illusion and mirage sequence will spark debate. In the end, not even a man of Frank’s grit can survive being severely stabbed in the middle of the desert. He dies, like Paul, like Ray. Ray’s father cries upon hearing the news. Alicia finds out that Ray was in fact the real father of their son. Paul has a highway named in his memory. The only living member we care about, Ani, still has all the paperwork and files big enough to ruin some higher-ups. She passes them on with the hopes that they will be used in the future.

We also learn that Ani had a kid, we presume Ray’s. Ani and Jordan have apparently become international travelers and best friends. The ending is fitting for Season 2 of True Detective in that it’s unclean and not fully satisfying. Ani and Jordan in big hats walking through a dancing crowd is what you want to leave your audience? Odd. Overall, the finale on its own merit was acceptable, the season as a whole was quality, but the flaws were numerous. And frequent. So long, Season 2 of True Detective. Rest in peace to Paul, Ray, Frank, and all of Pizzolatto’s other creations.

For Season 3, we need a serial killer and detectives on his ass. That’s my closing wish. Season 1 was epic, Season 2 was a letdown while still being enjoyable, but Season 3 can be a bounce back type of run. Pizzolatto is intelligent enough to handle the serial killer angle strongly for an eight-part group of shows. In Pizzolatto’s dark universe, give me a realistic, non-sensationalized serial killer currently on the hunt and two or three detectives attempting to put the pieces of his crimes together before conducting a hunt of their own. That would be ideal.