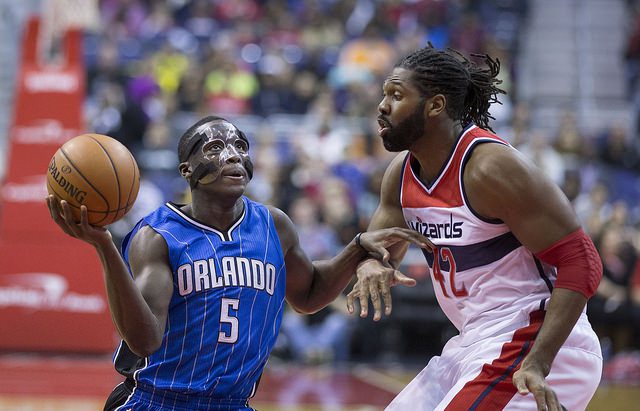 On par with the last two years, we’re kicking off the Top 50 NBA Players Countdown with a Bill Simmons-esque Dr. Jack Breakdown of some of the top candidates for the 50th spot in the list. This year, for the first time ever, I’m going to be juggling the talents of not two, but three NBA stars. Rather than finding two players who are cut from a similar positional cloth and pondering who should get the edge for the 50th spot, this year I’m comparing, contrasting, and wondering aloud which of these three Orlando Magic players (Nikola Vucevic, Victor Oladipo or Tobias Harris) can or will make the leap (depending on how you feel about the three guys in question, maybe it’s another leap) first and bring the franchise back to a state of relevance, AND who gets the 50th and 49th spots in the countdown!

Offensive Game
A lot of angles to consider here. Oladipo, Harris and Vucevic are completely different types of offensive players, so it’s tough to weigh whose offensive skillset is the most developed, or maybe more importantly, is most valuable to the Magic’s success now and in the future.

The consensus seems to be that Oladipo is the furthest away of the three from being a complete offensive player, but the second year shooting guard made big strides in his sophomore campaign to establish that thought as a misconception. His jump shot was moderately improved, but it’s still a work in progress. If you had to bet your life on it, you probably wouldn’t feel comfortable saying he’ll ever be a marksman from deep, but he can survive for the time being if he finds a way to play a little more in control and finish at a higher rate when he’s attacking rim. The Magic’s best bet for any form of serious offensive sustainability over the next few years is if Oladipo turns himself into a reliable, yet still reckless attacker off the dribble … and my gut feeling says he’s not too far away from hitting that mark.

Harris has the ugly, and unfortunately much-deserved reputation as a ball-stopper attached to his name. He has one of the lowest assist rates in the NBA, he settles for contested jumpers far too often and that’s a big reason why he scored far less efficiently in isolation scenarios than Oladipo did last season, per NBA.com. He has the physical tools and offensive repertoire to be an efficient scorer, especially if he starts getting more looks in better spots on the floor (for Harris, and really anybody to be fair, it would be closer to the basket or uncontested from behind the arc. Looking at the bigger picture however, Harris made a big jump as a long-distance shooter last season and that’s a promising sign. He shot 25 percent from downtown in 2013-14 compared to 36 percent in 14-15, and he improved from 29 percent to 45 percent in the corners.

Vucevic is one of the best pure post scorers in the league and the most reliable option for a bucket on the Magic roster. Per NBA.com, he shot 46 percent in post up situations last season, a higher mark than notable post-savants like Zach Randolph, LaMarcus Aldridge, DeMarcus Cousins, Tim Duncan and Pau Gasol. By the numbers, Vucevic was also the best spot up shooter on the Magic last year, though those shots are coming from 10-20 feet away, as opposed from three-point range. Still, the big Serb’s versatility and consistency as a scorer give him the pretty clear edge over his Magic teammates.

Defensive Prowess
I won’t waste too many words here. Vucevic ranked 41st in opponents field goal percentage out of 48 players who played in at least 41 games and defended at least six shots per game at the rim. Harris looked just as much like a revolving door as an actual defender last season, and he’s even admitted to being “not the best defensive player.” At least he owns it. Oladipo was drafted with the second overall pick in the 2013 NBA Draft and his worst case scenario was probably something like a Tony Allen-level defender. He’s one of the young perimeter guys who have the look, physical tools and attention to detail to be a lock down perimeter defender. In fact, if we’re talking about Under-25 guys who have the highest ceilings as perimeter defenders, Kawhi Leonard is the first guy that comes to mind, and then Oladipo, Marcus Smart, Michael Kidd-Gilchrist and Andrew Wiggins are the next four that need to be discussed.

Nickname
You’re probably thinking to yourself, “Wait, a players nickname matters?” Why else would Nick Young and Marcin Gortat be ranked 23rd and 24th respectively in this countdown? I kid. Anyway, I only bring up nickname because Oladipo, Vucevic nor Harris have a nickname and I’m just not cool with that. Vucevic is routinely referred to as “Vooch” and I’ve heard Oladipo shortened to “Dipo” from time to time, but I for one am not a fan of shortened last names as nicknames. So, if you have any suggestions for any of the three (and they are good ones) leave them in the comments below and I’ll follow you on Twitter.

Marketability
Another completely unimportant category for the sake of this countdown. I hope you don’t mind that it’s included; I just needed to find a way to embed this YouTube video.

Contract
Harris signed a four-year, $64 million extension during the summer and Vucevic is under a cheaper four-year deal at the moment (four years, $48 million). For the time being though, Oladipo gets the nod. He has two years left on his deal and the Magic only owe him $6 million per year. But with a rising league-wide cap number and plenty of cap space, the Magic shouldn’t have any issues dishing out the money needed to lock up Oladipo for a few more years when that time comes.

Crunch Time Chops
I imagine this becomes Oladipo’s corner sooner or later, but for now Harris is the one who owns property there. He’s also the only Magic player who owns a YouTube Buzzer Beater montage.

Originality
Vucevic is a throwback to old school centers who could get you twenty points every night and score facing or with his back to the basket. This is increasingly rare in today’s pace and space game, but Vooch at least looks something like a big man of the past. Oladipo is just as unoriginal as Vucevic, and that isn’t a knock on him. Since his Hoosier days Oladipo has always looked like Dwyane Wade to me. Poor man’s Wade or homeless man’s Wade perhaps, but like Wade nonethless. Regardless, Oladipo isn’t too different from other athletic shooting guards in the league.

Harris gets the nod based on what he could possibly become. Harris has the potential to be some sort presence that is similar to Draymond Green, even if it’s just on the offensive end. He’s got a similar body and is probably just as well equipped to be a small ball four who spaces the floor and creates some offense off of the dribble. Of course, the motor and defensive versatility is what sets Draymond apart from other “stretch fours” and it’s still not a certainty that Harris is of that mold. Still, Harris could be different, and it would probably be for the best.

Upside
And I don’t just mean upside five years down the line. I’m talking about upside for the 2015-16 season. If I pointed a gun to your head (don’t worry, the only gun I’ve ever touched is a Super Soaker, so you’re safe) and said “pick the guy who is going to make the leap next season,” who are you picking? You’re picking the guy who belted out New York, New York, aren’t you?

So let’s go to the scorecard: Oladipo is the far and away the best defensive player of the trio and he’s on the best contract for the time being. I could also hypothesize that neither of his two Magic teammates could pull off a Sinatra act like he can. Vucevic is the most consistent offensively and Harris, Captain Clutch himself, with some fine-tuning, could be the type of player that the Magic are in most desperate need for.

I’d say heading into the 2015-16 season Oladipo gets my vote as the Magic’s most-likely best player, and Vucevic, who was Orlando’s best guy last year, edges out Tobias Harris for the 50th spot on my Top 50 Countdown. Whew, I’m glad we got that settled. Now send in those silly nicknames!