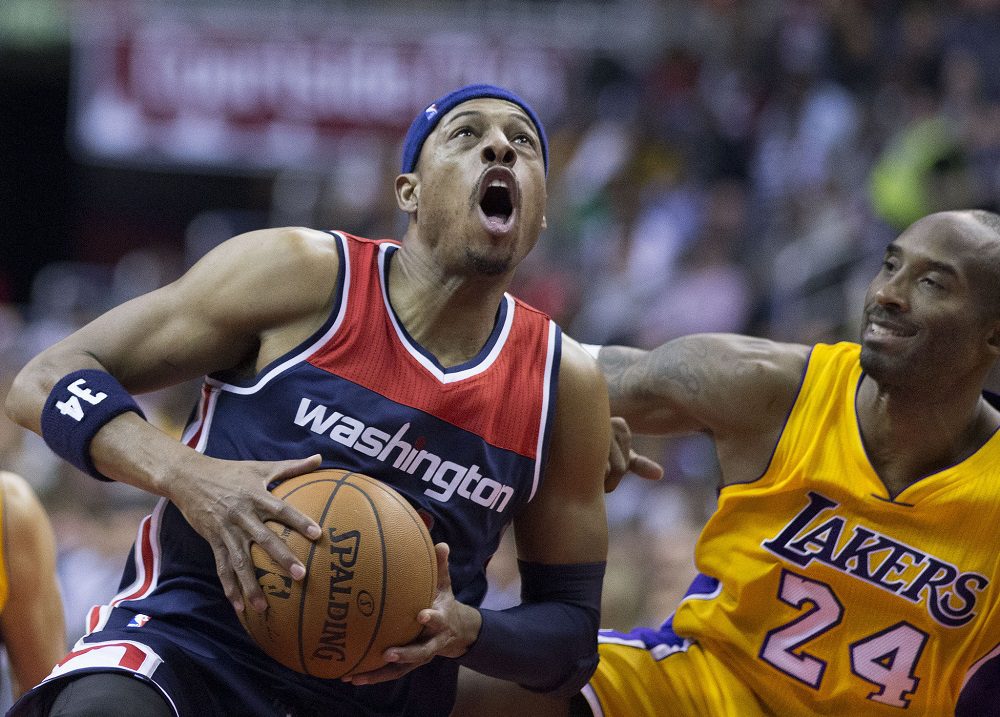 Somewhere around mid-September marks the beginning of my 50 day countdown until the start of a new NBA season. Contain your excitement friends … tomorrow is that day. Now if you’re familiar with my work then you get the gist of what’s to come over the next month and a half. Each day (roughly) I’ll break down one NBA player (sometimes multiple players) until the NBA season begins on October 27th. I start with the player I determine to be the 50th best in the league, and finish the countdown with the best basketball player alive. If you haven’t checked out my criteria yet, feel free to do so by clicking here. If you’ve been introduced to the criteria or don’t really care about it, then carry on today as I take you through the players who made the list last year but didn’t this year, as well as the rest of the players who I have named Honorable Mention.

Chandler Parsons (50th last year) – Last September Parsons edged out Gordon Hayward for the 50th spot in my Top 50 Countdown and it has been all downhill since. Parsons never totally found his footing in Dallas, played only 15 games after the All-Star break and couldn’t quite reel in DeAndre Jordan during Free Agency. Not to mention, he missed out on the opportunity to be on Bachelor In Paradise for the second straight year.

Taj Gibson (48) – Lost some of that sixth man luster with the emergence of Nikola Mirotic‘s arrival in the Windy City. By the way, how the hell is Taj Gibson thirty years old? How come I’ve been thinking he was like two or three years older than me?

Kenneth Faried (46) – Somebody cue up ESPN’s Trade Machine! We need to get Kenneth Faried out of Denver and onto on a contender before it’s too late. Couldn’t he have done everything for Cleveland that Tristan Thompson did during the Playoffs?

David West (45) – West’s days as one of the key statistical contributors on a contender have come and gone, but his impact has always been larger than one that is defined by numbers, and that makes him a perfect Spur in a roundabout way. He provides a good presence in the locker room, he’s an intimidating figure on the floor, a consummate teammate and still capable of showing up in a big spot if need be. He’s a luxury item for the Spurs, and a pretty cheap one considering his track record.

Nicolas Batum (43) – It goes without saying, but I think I was just a wee bit too high on Batum last year. In reality, he’s probably not a foundational piece — unless you’re trying to build around lanky nut-assaulting Frenchmen — and his stock took a major hit last year. How Batum fits in on a Charlotte roster that has been starving for perimeter shooting when his jumper looked shaky and downright broken all last year is a mystery, and if he’s leaving town in the summer of 2016 to play for the Raptors remains to be seen.

Rajon Rondo (37) – Holy Christ, talk about a fall from grace. Tony Montana fared better in the last thirty minutes of Scarface than Rondo did in Dallas. And if the basketball equivalent of dying face down in a fountain isn’t playing for the Sacramento Kings, then I don’t know what is. The World is Yours, Rajon.

Derrick Rose (36) – For the record, Rose missed 31 games during the regular season, played exactly four good Playoff games, and never totally looked like the peak version of himself. I gave him the benefit of the doubt last year. It’s just time to face facts that he’s not the same guy as he was in 2011. I didn’t want to live with that reality last year. I don’t have much of a choice now.

Ty Lawson (34) – Clearly a level below some of his Western Conference point guard foes, and the alcohol issues present serious problems. The head-case potential, even after a change of scenery and move to Houston, is just a little too high for my liking.

Lance Stephenson (33) – Wait, did I hear somebody say head-case?

DeMar DeRozan (32) – A new rule for my Top 50 Countdown: If a pair of teammates are both in contention for a Top 50 spot and both barely shoot 40 percent from the field, only one of them can get the nod for a spot on the list. My condolences, DeMar.

Al Jefferson (22) – My friend Dalton found a signed Al Jefferson jersey at a thrift store being sold for 12 dollars. Naturally, he bought it, taking the chance that it wasn’t actually Big Al’s signature. This doesn’t have anything to do with me leaving Jefferson out of the Top 50. Honestly, I just wanted to tell a cool Jefferson related story to try to distract myself from the fact that I actually left him out of the Top 50.

Paul George (20) – Regretfully, I’m afraid to make the same mistake I made with Rose last year. It goes without saying, but I am more than willing to be wrong about George, and Rose for that matter. Let’s get to some of the other tough cuts.

Nerlens Noel– The only player in the league who finished in the top 10 in blocks and in steals last season. The Noel/Okafor partnership is so promising, 76ers fans might actually be able to forget about their team’s blatant attempt to tank for a third straight season and the fact that Joel Embiid is probably going to play 105 fewer games than Greg Oden did; Oden played 105 games.

J.J. Redick– If Redick were in any other situation would we actually be considering him as a potential Top 50 player in the NBA? He’s in one of the top three to five best possible spots for someone cut from this particular shooting guard cloth, and to his credit, he’s damn good at what he does.

DeMarre Carroll– On the sneak Carroll was Atlanta’s best player in the postseason save for the Millsap/Horford combo, and as a result he got a whopping $60 million offer from the Raptors. A bit of an overpay perhaps; it’s $10 million more than Juntao was asking for Consul Han’s daughter in Rush Hour. Yes, you read that correctly. That was a Rush Hour reference. You best believe I’m finding a way to work Money Talks into this Top 50 Countdown.

Monta Ellis– Sort of the same story as Kenneth Faried; I’m anxiously waiting for Monta Ellis to land that sixth man/instant offense role that he’s absolutely destined for. He’s the classic if he’s your second or third best guy, you aren’t winning a title, but if he’s your fourth or fifth best guy, you’re in really good shape guy.

Rudy Gay– Every year Gay is one of the more confusing players to rank. In his Memphis tenure, the Grizzlies had more success when Gay was injured. After the Raptors shipped him away to Sacramento, they became more relevant than they had been since Vince Carter was in uniform over a decade prior. And now the Kings are in a similar predicament. Gay is probably going to get his 20 points and 6 rebounds this season, but it always going to feel empty because the Kings will once again finish near the bottom of the Western Conference. Maybe Kendrick Perkins was right. Maybe Gay is just a virus.

Wes Matthews– Injuries suck, man. Before Wes Matthews tore his Achilles tendon the Blazers looked like a legitimately frisky pseudo-contender in the Western Conference and Matthews was a shoo-in for a Top 50 spot. There might not have been a better three-and-D guy in the league for the first four months of the year. Let’s hope he can get back to that level in Dallas this season.

Brook Lopez– Three big questions related to Brook Lopez: First, can he actually play a second consecutive healthy season? Second, will I actually get myself to watch more than eight full Nets games all year? Third, how long until the Brook and Robin Lopez open up a pizza place in Little Italy called “Two Brothers Pizzeria” and leave every Italian confused why two non-Italian seven footers own a restaurant in Little Italy?

Tyson Chandler– Five years ago Chandler had the athletic center who protects the rim and doesn’t possess any sort of offensive game unless he’s catching lobs corner just about all to himself. Now these lanky dudes are grown on trees, and they’re all younger and a little more athletic and effective than Chandler is.

Giannis Antetokounmpo/Jabari Parker/Khris Middleton– There isn’t a a single person living outside of Milwaukee’s city limits who is more excited for this Bucks season than I am. I seriously need someone to try to talk me out of picking the Bucks to win 50 games this year, pronto.

A 2015 Rookie– It’s like clockwork; at least one rookie every year will make the leap into the top fifty the following season. Jahlil Okafor, Karl-Anthony Towns, DeAngelo Russell, Stanley Johnson and Emmanuel Mudiay are my five favorites to make an impact immediately, and I’d take a flier on Jerian Grant, Tyus Jones and Myles Turner (or, as I will call him from this point forward, ‘My-Turn’) as my longshots.

Roy Hibbert– I asked my cousin Paul Clark, a longtime Lakers fan, if he was excited for the Roy Hibbert Era in Los Angeles. He told me it’s going to be f****** terrible. Well then! I guess I’ll just leave big Roy on the Honorable Mention list for now.

Paul Pierce– If you don’t think he’s going to hit at least three big shots for the Clippers in the Playoffs that will justify him being included in the Honorable Mention, I’m going to call you crazy. That’s why they brought him there.

Brandon Knight/Jrue Holiday– Knight and Holiday are both capable point guards, solid players, but they’re probably the 8th and 9th best point guards in the Western Conference. How much credit can I actually give them for that?

Michael Kidd-Gilchrist– He’s not even 22 years old and he’s already one of the most destructive perimeter defenders in the NBA. If MKG’s jumper continues to improve at the rate it has over his first three seasons in the league — he’s transformed himself from a sub-30 percent mid-range shooter in years one and two to a 40 percent mid-range shooter in year 3 — then he’s not going to be on the outside of the Top 50 looking in for too much longer.

Kobe Bryant– Grandfathered into at least an Honorable Mention nod for as long as he’s in the league, simply because it still feels like on a given night he could explode for 40.

Check back tomorrow for the beginning of the Countdown!