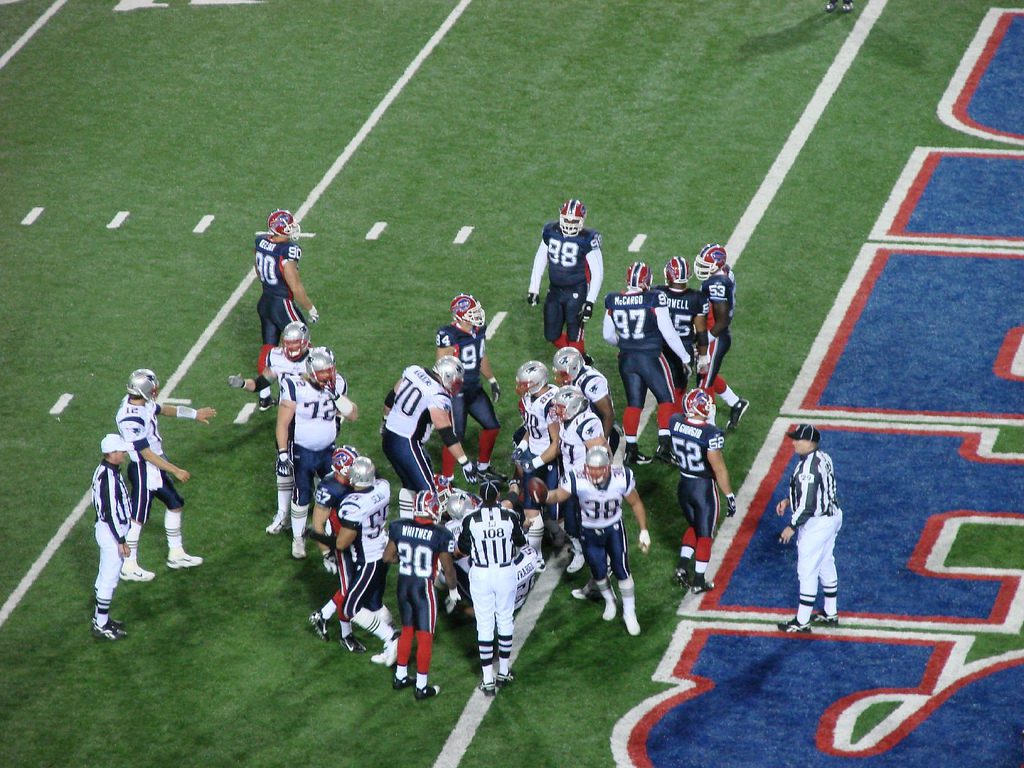 There may not be a better matchup on the slate of games for Week 2 of the NFL than the New England Patriots vs the Buffalo Bills. Every season around this time the divisional slobber-knocker between the two rivals always becomes one of the better games of the year and this one should be different in only one way.

The magnitude of this Week 2 AFC East brawl!

After the performances put on by both teams in their season opener, this early season game seems bigger than most because of the AFC East implications. With this division looking to be the strongest in football this game carries more weight than the normal Pats/Bills September scuffle. Of course the hype is there because Rex Ryan took the helm of the Bills, but that should not overshadow the fact that this is the most talented roster Buffalo has faced the the Pats with in the past 15 years.

In the Patriots Week 1 game they used five different offensive line combinations. More amazing than that, Tom Brady was only sacked two times while having that revolving door of an offensive line. Really though, only two? Against a line that was showcasing three rookies? Including rookie center out of Georgia, David Andrews, who in my opinion was the player of the game. Unfortunately the Steelers aren’t what they used to be on defense, but only two sacks allowed with three rookies in the middle making their pro debuts is impressive. Of course there was a little help from Brady who was getting the ball out at an average of 1.88 seconds. His ability to spread the field and find the open receiver is uncanny and it certainly takes pressure off of his young line. Can the Bills four man rush put enough pressure on the inexperienced line to get to Brady?

The Patriots rookie middle will certainly be tested by a defensive line that has had sucess against the Pats and Brady in the past. In the two games between the teams last season Brady was sacked six times. They split the two meetings with Doug Marrone as the head coach in Buffalo. A Marrone defense is no where near as aggressive or successful as a Rex Ryann (compliments of his dad Buddy) defense.

Rex has made a career on beating the Patriots while he was skipper of the Jets. By consistently getting pressure on Brady up the middle with a four or five man rush, preventing Brady from stepping up in the pocket. Between the talented front four in Buffalo and Rex having a remarkable system of disguised blitzes, it should make for a long day for the Patriots offensive front, especially the middle. Exactly where all of the Patriots rookie O-lineman are. Could the change of scenery bring wins for Rex? Same division, new uniform, new (better) talent… possibly new results against an old foe?

For as long as Bill Belichick has been in charge of Patriots personnel, the Patriots have always had one running back with above average route running and pass catching capabilities. Whether it was Kevin Faulk or Shane Vereen, a massive part of a Belichick led team is a pass catching back having a giant role in the offense. Dion Lewis could be the most perfect fit for that position than Belichick has ever had.

In the game against the Steelers, Lewis led all Patriots running backs with 15 carries amassing 69 yards. As well as managing 51 yards off of four catches. Although he never found the end zone, a lot of his touches were on third down and in big passing situations.

He solitified his dependability to Brady and even with the return from suspension of LaGarette Blount, he cemented his spot as the third down and passing catching back of the offense. His role will be plentiful if Blount cannot get it going in traditional running formations against Buffalo. If that is the case look for the Patriots to spread the field and begin targeting Lewis in the passing game. The Pats love mismatches and if Lewis is isolated with a Bills linebacker on him, that is a gigantic mismatch.

Side note:  On Monday Bills coach Rex Ryan was quoted when asked about Dion Lewis:  “I don’t even know who the guy is.”

As if a New England Patriots player needed any more motivation this season.

The Patriots defense pride themselves on taking away the strength of any offense they face. If you like to run the ball, they stack the box and make you throw it. If you throw the rock a lot, they will give you defensive looks that would force any quarterback in the NFL to check to a run. The issue is the Bills showed a healthy mix of play variety last week against the less than stellar defense of the Indianapolis Colts.

So how will the Patriots play them?

Easy, very similarly to how they stopped the Seattle Seahawks in last seasons Super Bowl. They will keep the speedy Bills QB, Tyrod Taylor, inside the pocket and make him throw the ball. Yes, Taylor threw the ball very well in Week 1, but all the throws he completed were on single read plays. Meaning, from the huddle to the throw the play is always going to the same guy. One read, one throw. You can bet the farm on the fact that if I saw it, the Patriot coaches undoubtedly saw it…

They will make Taylor go through his progressions by taking away his first read and expose the holes in the game of the five-year veteran who is just now getting his shot. To answer that the Bills will switch to a run heavy offense and the Patriots will shut new Bills running back, LeSean McCoy, down. Patriots DE, Rob Ninkovich, is a monster at sealing the edge and as good as McCoy is, he is not a trench runner. He likes to kick it to the outside and Patriots defenders will be waiting for him as they will already be there concentrating on keeping Taylor in the pocket. In taking both of these keys of success away from the Bills offense, they should be scrounging for yards.

On the other side of the ball Rex Ryan will introduce the recipe of Tom Brady containment to his new team. Whether they have the talent or the smarts to execute or not is yet to be seen, but Rex has certainly proved he knows how. He will bring his corner backs tight to the line and play bump and run with Brady’s wideouts. Keeping the quick “read and release” by Brady to a minimum. Remember the 1.88 second release average Brady had last week? Rex wants to make that 2.88, and he might get it with that stout D-line.

With Brady and his wideouts struggling to get it going in the short game, Dion Lewis will become more valuable to the Patriots offense. Whether it wull be on screens or one on one on the outside with a backer defending him, he will be targeted heavily and will have a superb conversion rate. Rex Ryan will know who Lewis is by the end of the game.

Bills will be struggling in their on way to move the ball making this a low scoring game. It will come down field goals and turnovers. Whoever wins the turnover battle of this game will emerge the victor. I just happen to think the Patriots will win that battle. Except a game full of huge hits and chippy plays. As all AFC East contests are. And this is guaranteed by me to be the game of the week.