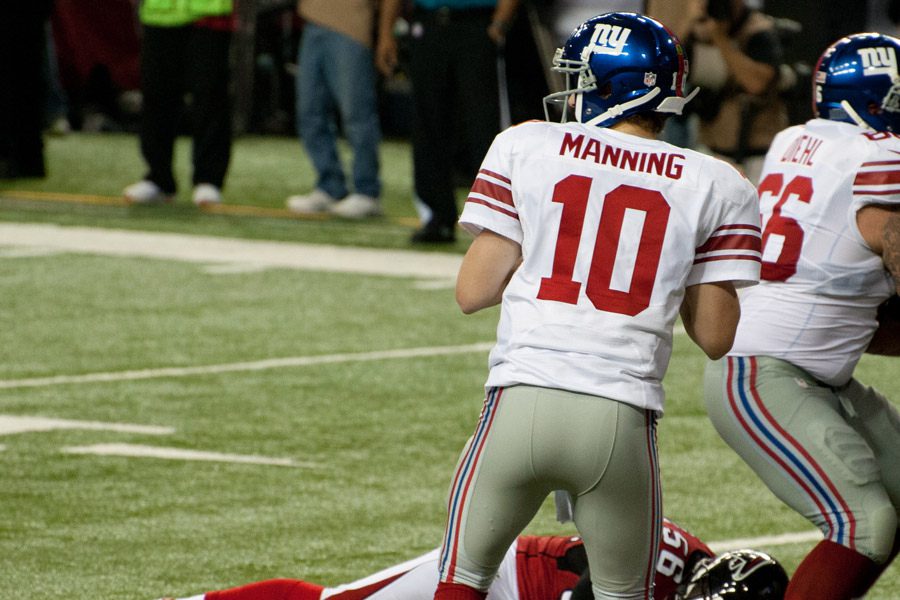 It’s Week 2 of the NFL season, and that just so happens to be the week where fans and analysts alike overreact to absolutely positively everything that happened during the first week of the season. As far as you know the St. Louis Rams are going to go 13-3, Andrew Luck is a bum, Adrian Peterson is washed up, Marcus Mariota is the GOAT and Jameis Winston will be out of the league in three years. Actually, don’t give up on that last one just yet.

Anyway, I’m going to try to sort through all of the B.S. and figure out which Week 1 results and events are worthy of serious consideration when it comes to forecasting the rest of the season, and which of them should be taken with several grains of salt. As always, home teams are in all CAPS.

Check out Peyton Manning‘s numbers over the last two seasons:

I know I said that I was gonna try not to overreact to anything from Week 1, but this isn’t a Week 1 issue. This is the steady decline of Peyton Manning. There was a time when picking against Peyton in a primetime game was suicide. When the Broncos visit Arrowhead tonight it’s just the logical pick.

Don’t mind me. I’m just slowly backing away from the Houston Texans bandwagon. Nothing to see here. Just keep moving.

So I’m not one who usually likes to name-drop, but back in May I met a certain Arizona Cardinals rookie who just so happened to score a game-clinching touchdown last week. He came into the sports apparel store I work at looking for some Cardinals gear for himself and his girlfriend because he had just found out that’s where he was drafted. If this individual does the same thing to my Chicago Bears this week I’m unfollowing him on Instagram and telling everyone he was an arrogant, entitled jerk-off who demanded that I give him a discount because he had just been drafted by the Cardinals.

I met David Johnson five months ago. Really nice guy. Glad to see him get in the end zone for the @AZCardinals

Minnesota looked like absolute trash on Monday night and Detroit pulled a typical Detroit on Sunday afternoon, giving up 30 straight points and blowing a 21-3 lead in San Diego. I don’t care if this sounds like a homer-ish thing to say, but I’m pretty confident that my Bears are better than both of these NFC North rivals. And yes, I’m aware that this isn’t saying much.

Two of our first litmus test games of the year; Pittsburgh, albeit without their All-Pro Running Back, underperformed on opening night and showed some legitimate flaws (like a tendency to break down defensively and leave Rob Gronkowski completely wide open). San Francisco, albeit against a possibly trashy Vikings team, looked a whole lot better than almost anyone expected them to. Cincinnati beat up on an unquestionably trashy Oakland Raiders squad and San Diego had to dig themselves out of a 21-3 hole to get a win in their home opener against Detroit. To be honest, I have no idea what to expect from any of these four teams. I’m lost, and when you’re lost and alone, and sinking like a stone, Carry On your best bet is to just go with the home teams and hope things sort themselves out.

Of course, I’m terrified that Philip Rivers might be in the early stages of an MVP season … that the Steelers just aren’t that good without Le’Veon Bell … that maybe Jim Harbaugh created such a toxic situation in San Francisco that he just needed to leave and the 49ers would get back on track … that Carlos Hyde might be the best running back in the NFL … that Andy Dalton could go full-blown Andy Dalton at any time … or, as we see so many times in the NFL, one team catches every single break and win because of it. There’s nothing I could do to forecast something like that though.

Here’s how Week 1 of the NFL season went for the Cleveland Browns:

Here’s how Week 1 of the NFL season went for the Cleveland Browns last year:

If a Browns player doesn’t get disemboweled next season in their opener I’d be thoroughly surprised. Speaking of surprises, how about Marcus Mariota looking like a legitimate NFL quarterback immediately? I was in the Mariota over Jameis camp way before the Rose Bowl, but I didn’t think Mariota would adjust this quickly. Then again, you probably need to gargle a gallon of salt water if you’re going to give high praise after an opponent plays the Bucs this year.

Could there possibly be two divisional games that are so much different in terms of level of importance? I’m not going to waste my breath on the Saints and Bucs. But I have plenty to say about the Patriots and Bills. The thing is, I’m going to have a whole lot more to say after the game, regardless of the outcome. All I will say is this: if you’re planning on going to the Super Bowl this year, you better buy your tickets right now. Seriously, don’t wait. Because if the Bills beat the Patriots this Sunday every single person in Western New York is going to buy a ticket within 45 minutes of the game ending.

The following statement is not an overreaction. In fact, I’m going to use all Caps because it cannot be more true. You ready? THE NEW YORK GIANTS HAD ABSOLUTELY NO BUSINESS LOSING TO THE DALLAS COWBOYS, AND THE FACT THAT THEY DID IS ONLY BECAUSE OF SOME OF THE WORST LATE GAME PLAY-CALLING I’VE EVER SEEN (and allow me to give a little credit to Tony Romo too, he was downright surgical on that final drive). But seriously, and pardon my French, how the f*** did the Giants blow that game?!?!

Look, if there is one lesson that Super Bowl XLIX taught us, it’s that you run the ball when you’re on your opponents 1-yard line. And here’s the funny thing; it actually made more sense that the Seahawks would throw in the Super Bowl than the Giants would. Here’s the situation in case you missed the truly bizarre Sunday Night Football opener:

The Giants were up by three with about 1:40 left in the game and they had the ball. THEY HAD THE GODDAMN BALL!!! Dallas had no timeouts left and it was 3rd and goal from the 1-yard line. Rather than calling a run play, you know, the kind that would allow the clock to run if the running back didn’t get into the end zone, Eli Manning rolled out to pass and chucked that sumbitch right out of bounds as defenders were closing in on a sack. Rather than going for it on fourth down, the Giants kicked a field goal, giving Dr. Romo about 1:25 on the clock to dissect their defense and kill the Giants season.

Eli Manning could have called a run play, took a knee, completed a pass, rolled out and taken a sack, danced a jig, crapped himself, split tens at a Blackjack table, or decide to do karate in the garage … you just can’t chuck that sumbitch right out of bounds. I picked the Cowboys last week and I’m still pissed off. Whatever, I’m not picking the Giants to win a game until a team does something stupider than what they did.

Gather around friends, it’s story time! Bare with me, because I’m going back all the way to 2009 to teach you, and the St. Louis Rams a valuable lesson.

During my junior year of high school basketball we, the Elba Lancers, pulled off a monumental upset of one of the top teams in the state on our home floor. Nobody gave us a chance to win that game. After the game my own mother told me she didn’t even think we would win. But we did, and it was glorious. Two nights later we had a road game against an average team in our league, and inside of their school they had a swimming pool. As we were getting ready for our game, all of the players on our team agreed that after we won we’d go for a swim in their pool. Not only did we lose, but we got shut out in the second quarter. Not a single point.

The moral of the story: after you win a big game on your home floor (or in the Rams case, on their home turf), don’t go into the next assuming your going to win easily and then go swimming. It just never works out that way.

Boy, I am super pumped this matchup will be the regional CBS game on television Sunday afternoon.

Eh, I guess this one isn’t a much better option. I’ve said it a thousand times, but one more won’t hurt … Thank God for the Red Zone channel.

And thank God for great NFC match-ups on FOX! I’d be way more hyped for the DeMarco Murray Revenge Game if he didn’t get only eight carries Week 1. At this point I’d be more surprised if Murray got 300 carries than if he got 100. Is there anyone out there who knows how to get their hands on a time machine so we can make sure DeMarco never left the Cowboys in the first place? Without Dez Bryant for the next month to two months, Dr. Romo is going to need all of the help he can get.

Anyway, I’ll hesitantly take the Eagles at home just because common sense says that the Cowboys are going to need some time to adjust without Dez and because the slightly more desperate time is usually going to win their home opener. Of course, this pick is complete garbage if four months from now we find out that God is punishing Chip Kelly for cutting his son from the team. Think about how irrationally angry some parents get when their kid gets cut from the team or even if they aren’t getting a lot of playing time. Now imagine if the all-knowing, all-powerful man upstairs is spurned … Chip Kelly and the Eagles don’t stand a chance.

Is it too early to abandon my Super Bowl 50 prediction, or do I go down with the Seattle over Indianapolis prediction for the third straight year? I’m torn. On one hand I promised myself that I wouldn’t overreact to too many of the Week 1 results. In fact, just last year Indianapolis started 0-2 and damn near made the Super Bowl. Seattle stumbled out of the gate to a 3-3 start but bounced back, went 11-1 in their next twelve and probably were an “I-Right Dive Right” away from winning their second consecutive championship. On the other hand, if Seattle gets pummeled in Green Bay (likely) and Andrew Luck and the Colts lose to Ryan Fitzpatrick‘s Jets on Monday Night (not likely, but for some reason this game is rubbing me the wrong way) it’s officially time to start panicking.