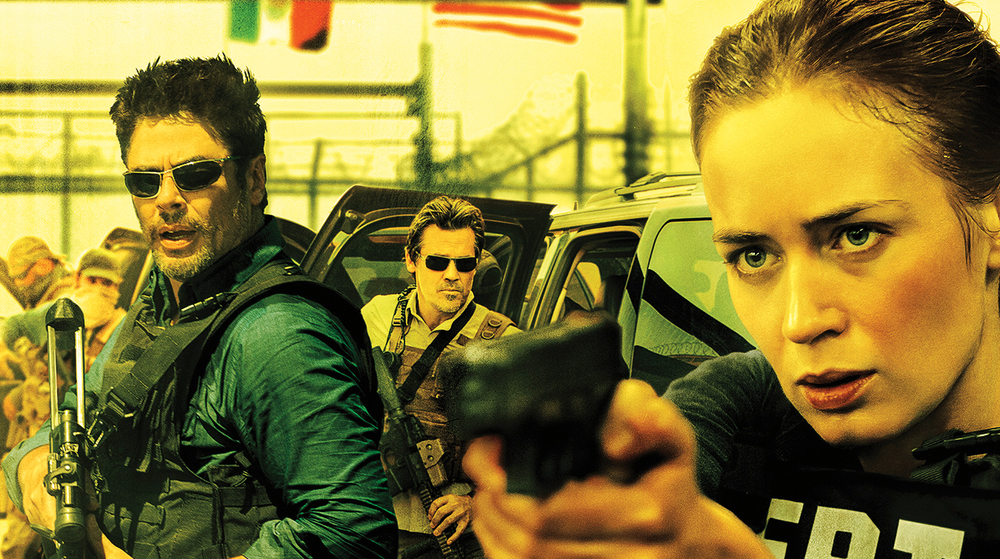 True horror comes from reality, and the entertainment industry attempts to distract us from it in order for us to live mostly sane lives; however, there are films rooted in realism that remind us about the real monsters that lurk around the corner. Sicario manages to do that in an immensely entertaining way. Director Denis Villeneuve, who brought us Prisoners, grants us top-secret clearance into a story involving the FBI, CIA, and their dealings with the drug wars across the Mexican border. We’re led into a world of tension right beside green FBI agent Kate Macer, played by a game Emily Blunt, as she is assigned to a team with unknown purpose that is clawing it’s way into the underbelly of the vicious world of the cartel. Kate is led by a listless man named Matt Graver, played by Josh Brolin, and a mysteriously savage specialist named Alejandro, played by Benicio Del Toro.

At its best, Taylor Sheridan’s script is as gritty as they come, navigating through the dark waters of the definition of morality when desperate situations call for brutality to restore balance. The mysterious mission is unraveled quite effectively, keeping you in the gray area of right and wrong. The film is anchored by a solid script with some snags in character development, and a few instances of weak dialogue. However, the other aspects of this amazing film more than make up for the few weak points.

There are only a handful of them, but the action scenes in this movie are hard-hitting, bloody instances where you truly feel a real sense of danger. We learn enough about the characters to care for them, especially Kate, and the tension is built up so well in each scene that it’s impossible to look away; it pulls you in like gravity. In particular, there’s a night vision shootout that is nerve-racking, and also manages to push the story forward very well. This film lives up to the ideal of having action scenes with purpose.

On top of the action, cinematographer Roger Deakins really does wonders with what’s captured on celluloid, especially with dark lighting. Whether he captures silhouettes of the soldiers faced against a colorfully sun-kissed sky, the peaceful clouds contrasting with a city on fire with havoc, or the slowly dying eyes of Kate lit by neon blue, everything that makes it in the frame is beautiful. The cinematography also lends itself well to the acting.

The script is brought to life by a solid set of performances, but the most seething, engaging performance comes from Benicio Del Toro as Alejandro. He is a cold and calculating beast, and although he shows some glimpses of humanity, he is always a threat. Shifting from intimidating mannerisms to soft, broken looks, and snapping into action without a moment’s hesitation, Del Toro has never been better. Alejandro’s past and future are mysterious, but Del Toro is so talented that he allows us to connect to his character the most. In fact, Del Toro’s Alejandro was so amazing that Lionsgate has already greenlit a sequel that will center around that particular character.

Emily Blunt gives a solid performance as Kate, but she seems to be underutilized at times. She has her moments onscreen, but she’s just there as the necessary rookie, and ocassionally seems to be too idealistic. Josh Brolin is darkly comedic as the lackadaisical Matt Graver. He rocks the flip-flops, and seems to be unaffected by the gruesome scenes he’s exposed to daily. However, he does have a sense of purpose, no matter how convoluted it may be. Graver’s character knows that the line that separates “us” and “them” has to be pushed out further in order to adapt to a changing world.

Sicario is a ticket to questions we don’t think to ask ourselves enough. It makes us appreciate the mindset that ignorance is bliss, plunging us into a nightmare we barely know. The film only scratches the surface of the real drug war, but it reminds us that right and wrong are defined by perspective.