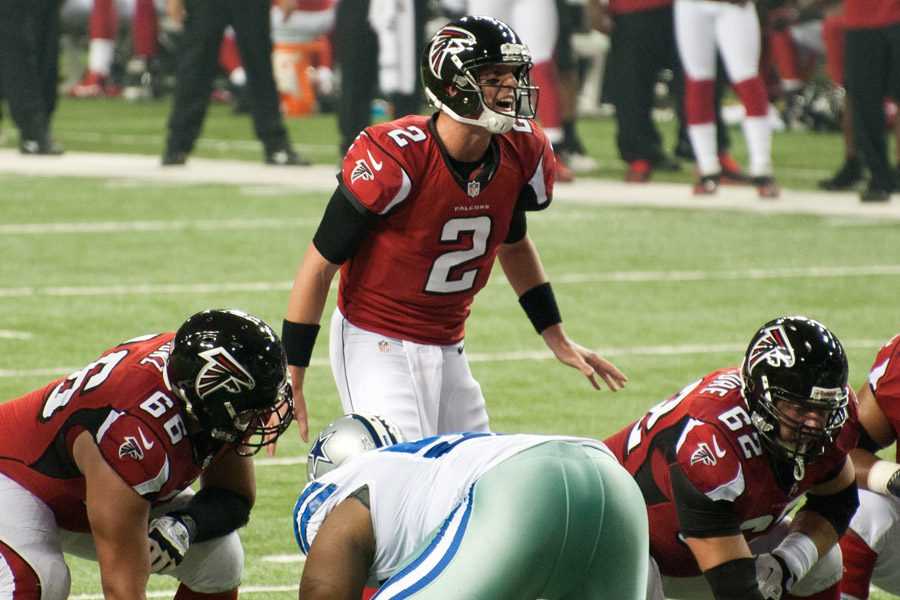 When an athlete faces adversity or finds themselves in a must-win situation, they have a choice: they can step up, make a play, gut out a victory and establish themselves as a big game player and an all-time great or they could fold under the pressure, fade into Bolivian and fly their pigeons on the roof.

Last week, I faced the challenge of making sure my weekly NFL picks record no longer stood below .500. After two weeks I was 15-17 picking games and even worse than that, I felt like I genuinely had no grasp on what to expect on a week to week basis. At worst, I had to go 9-7 picking the Week 3 games to save this column. If I couldn’t, “Sonny’s NFL Picks” would be killed off and buried. I had a eulogy planned for it and everything.

The eulogy turned out to be completely unnecessary and the thought of killing off the column seems pretty silly now seeing as though I went 14-2 picking the Week 3 games. My performance last week ranks right up there with LeBron’s Game 6 performance at Boston in the 2012 Conference Finals in terms of a legacy saver and career definer. My back was against the wall, and I metaphorically went out and dropped 45 and 15. And now only intense leg cramps can stop me.

Home Teams in all CAPS

Right off the bat I find myself in a conundrum because the two teams that blew my perfect week last week (Baltimore and New York) find themselves in games that look winnable to the naked eye, but naturally I’m hesitant to pick either of them the very next week. Baltimore goes into Pittsburgh with the Steelers down one MVP candidate quarterback (Ben Roethlisberger) and up a former convict (Michael Vick), and the Jets head to London, England to play a Dolphins team that has almost certainly given up on head coach Joe Philbin. The big question: have the Dolphins given up on Philbin to such a startling degree that if the they got blown out in jolly old England that he would be fired on that very awkward flight back to Miami?

I’m officially on the “I hope the Bears go 1-15 so we can get the number one pick” bandwagon. I don’t want to go 0-16, that’s just embarrassing. But I’d be absolutely O.K. with 1-15. Truth be  told, I’m actively rooting for it at this point. And the Bears quest for the number one pick in the 2016 NFL Draft actually has me legitimately invested in college football now, because I’m basically a scout for my team. My three favorite players so far that I hope the Bears might draft first overall are:

Connor Cook, Quarterback, Michigan State – Jay Cutler has overstayed his welcome and Jimmy Clausen, bless his heart, clearly isn’t the answer. Did you know that the Bears punted on all ten possessions they had against the Seahawks last week? We need to find a franchise quarterback ASAP.

Robert Nkemdiche, Defensive Tackle, Ole Miss- An absolute stud on the D-Line, and a legitimate factor in Ole Miss’ upset victory at Alabama a couple of weeks ago. I just need to learn how to say his last name. The other day my friend at work referred to him as “Ndamukong Suh” because he didn’t know how to pronounce it the right way.

Leonard Fournette, Running Back, LSU- I don’t even care that he’s not eligible. Spend the pick on him this year just to make sure you don’t miss out on him. He’s going to own the NFL.

A good sign that your AFC Super Bowl pick isn’t in good shape: you’re really worried about their Week 4 home game against the Jacksonville Jaguars.

My logic for this pick: the Bills have a knack for losing games that they’re supposed to win, just like the Giants have a knack for winning games that they’re supposed to lose. Ipso facto, this game appears to be one that belongs to the Giants, but hold on a beat … Doesn’t it feel like it’s a little too early in the season for the Giants to start pulling these games out of their asses (and don’t be mistaken, they are due some of those kinds of wins after blowing their first two games of the year) or for the Bills to blow one of these home games that they should win, if that’s even in play this year? It does to me, and then again, I’m not even all that confident that the usually inevitable Bills regular season collapse is coming. I think their loss at home to the Patriots might turn out to make sense later on in the year because the Patriots are a juggernaut, not because the Bills aren’t Playoff worthy.

Common sense says one of these home underdogs is going to pull the upset, only I’m not sure which one it’s going to be. Rather than splitting the difference and picking one — I’m leaning a little more towards Tampa Bay over Carolina, simply because I never, ever want to pick Kirk Cousins to win a football game — I’ll take both the favorites and bank on this being one of those weeks, like last week, where the better football team wins. If only that were the case every week I’d be like a million times better at picking football games than I already am.

At this point we can basically say that Julio Jones is to Wide Receivers what J.J. Watt is to Defensive Ends, right? I mean, this guy is in a whole different stratosphere than anyone else who plays the Wide Receiver position, and there are a ton of awesome Wide Receivers in the league right now. Jones, Antonio Brown, A.J. Green, Odell Beckham Jr., Anybody Tom Brady or Aaron Rodgers are throwing to, a rejuvenated Larry Fitzgerald, the timeless Steve Smith Sr. … I could keep going.

Another thought, and I know it’s early, but I’m curious: what are we supposed to make of Atlanta? They’re one of seven 3-0 teams, their offense is fantastic and they have a history of playing spectacularly well at home. Are they the third best team in the NFC? Are they even in the top five in the Conference? God I love the NFL, and I love overreacting to this kind of stuff when the season isn’t even a quarter of the way over.

Don’t mind me, I’m just slowly backing away from those “Cincinnati is the regression team and Marvin Lewis won’t be the Bengals Head Coach next year” comments I made before Week 1. Nothing to see here. Let’s just move on.

To all of the Browns fans out there, just look on the bright side … at least you’re team employs the slightly less crappy of the two McCown brothers. While we’re here, let’s go over some of my McCown brother facts.

Is it out of the realm of possibility that the Jim Tomsula era might come to an end after this one, or is it still too early? How long does it take to know that a guy just shouldn’t be a head coach? Is it after his team gives up 40 points in three straight games? Or should we have been tipped off to this when Tomsula gave this bumbling interview?

Or when he was introduced as head coach?

I’m really worried for all of Carson Palmer‘s knee ligaments this week. I don’t think the hit Ben Roethlisberger suffered last week against the Rams was dirty or malicious, but St. Louis is a physical defense and Carson Palmer does have a history of being as delicate as fine China, especially in the knees and especially against the Rams. It was less than a year ago that Palmer’s season ended when he suffered an ACL tear against these very St. Louis Rams.

It would be just as big of a crime if it were to happen again this year as it was last year. The Cardinals were 8-1 when they lost Palmer last year, and right now they’re 3-0 and they’ve absolutely pummeled all three opponents. They have a league best +77 point differential and the roster is stacked on both sides of the ball. Ladies and gentlemen, say hello to your favorite to win the NFC … the Arizona Cardinals!

On the sneak, this might be the best game on the Week 4 slate. After a 20-3 Week 1 loss at the suddenly atrocious San Francisco 49ers, the Vikings have bounced back to win their next two and outscore their opponents 57-30 in those two games. Adrian Peterson is rounding into form (he’s got 49 rushes for 260 yards over the last two weeks) and the Vikings have committed only three turnovers on the season. Meanwhile, the Broncos three wins have ranged from borderline last minute to right down to the wire, and it’s been the defense that has carried them thus far. The Denver D has forced ten turnovers, the second best mark in the league behind the J-E-T-S and they’ve come at the most opportune times.

Under previous seasons circumstances, this game would’ve come down to the Vikings being able to control the clock, wear out the Denver D and keep Peyton Manning off the field. Now it looks like it’s a matchup that will be decided by which offense can remain mistake free for longer. And even though Peyton can’t even tie his own cleats anymore, it’s still really tough to pick against him, especially when he’s flanked with a ball-hawking defense.

Dallas over NEW ORLEANS over Anybody Who Watches This Game

Last week the Seahawks defense got back on track against the anemic Chicago Bears offense. Doesn’t a Monday Night Football game at home against the Lions feel like the perfect time for the offense to start clicking?