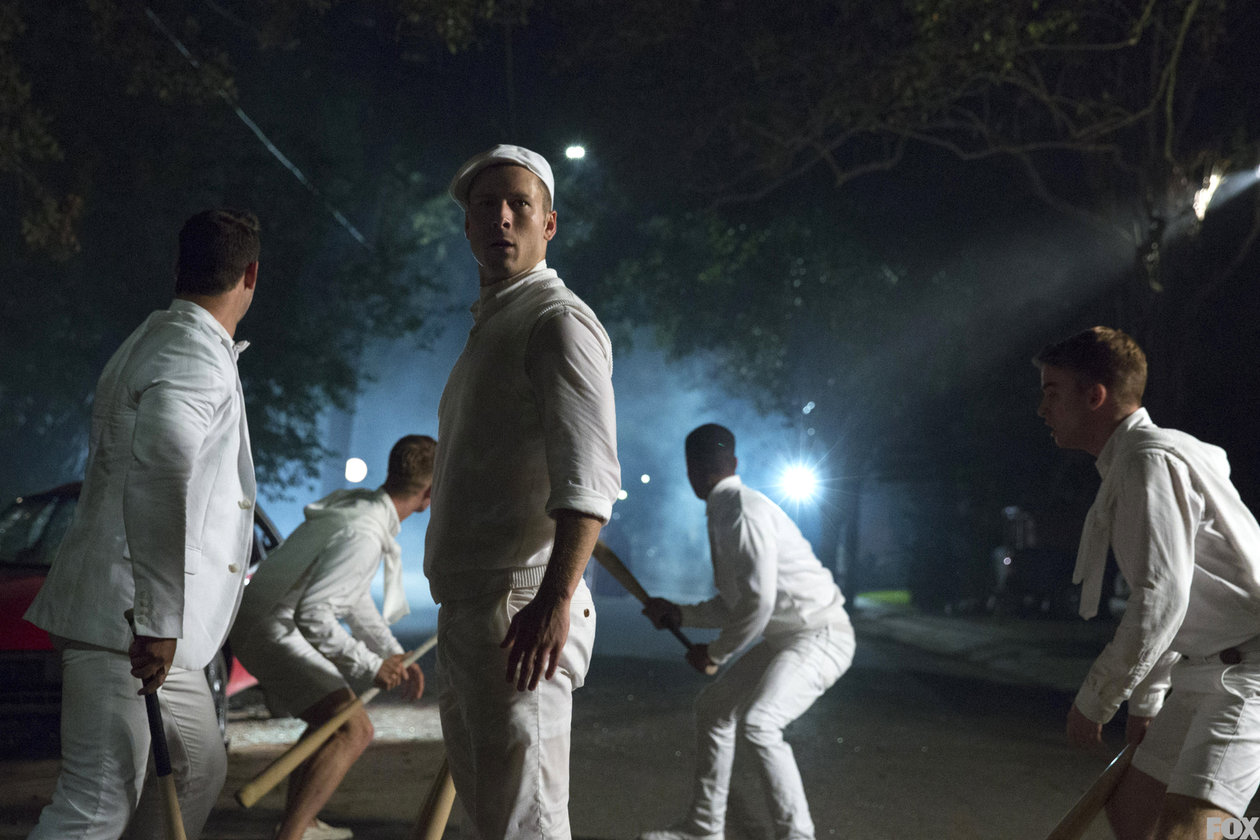 The Dicky Dollar Scholars try to enact the “Ghetto Code” and take down the Red Devil.

I spent the entire past week excited for the new episode of Scream Queens and, thank God, episode three did not disappoint. This week’s episode was slightly less bloody than the last, though no less hilarious, as this week was more plot-centric.

After learning that Chanel Number Two’s body is also now missing everyone in the Kappa house decides to take on the task of unmasking the red devil. It seems that everyone has a different theory on who the devil is: Dean Munsch, Zeyday, Chanel Number One….

It’s still too early to make any real guesses. The writers are throwing in red herrings left and right, meaning everyone remains a suspect. Once we start getting real clues we’re going to realize that the Devil is someone we didn’t think to suspect.

Also, I like to imagine that the producers and writers already know who the devil is and they’re just trying to throw us off the trail. Because I have faith in the producers and they likely wouldn’t put us through another Dan-is-Gossip-Girl or Cece-is-A situation. They just wouldn’t do that to us. Right?

Though this episode did have marginally fewer deaths than last week’s, that’s not to say that there wasn’t still gore. In fact, like last week, this week’s two best scenes just so happened to also be the bloodiest scenes.

The first scene is the murder of new mascot Coney. Dean Munsch decides that it’s too risky to keep the school’s red devil mascot while still holding her official stance that there is no serial killer. So, in an effort of town history preservation, she creates a new mascot, Coney the ice cream cone.

Unfortunately, just as Coney is starting to love his new job as mascot and ladies’ man, the red devil cuts his mascot career short. Literally. He chops Coney in half with a chainsaw. While still dressed in his stolen ice cream costume. Poor Coney.

The second scene might even be more ridiculous. After Chad decides that Boone was in fact murdered, he leads the rest of the Dickie Dollars in an act of retaliation against the red devil fueled by some “gym candy.”

The Dickie Dollars, dressed all in white, armed with baseball bats, and backed by the angelic voices of the Backstreet Boys, take it to the streets in hopes that the devil will show himself.

Unfortunately, when the devil does appear the Dickie Dollars are surprised to find themselves face-to-face with, not one, but two red devils. Surprise!

Unprepared and outmatched by the devils and their chainsaws the boys get brutally beaten. One of the boys even gets both his arms chopped off a la Monty Python and the Holy Grail in a valiant effort to protect Chad. All while “Backstreet’s Back” still plays in the background.

Honestly, those two scenes probably would gross me out in any other situation. But the writers make everything so ridiculous that it’s hard to take it seriously, even when there are body parts being chopped off with a chainsaw. It’s the perfect mixture of disgusting and laughable that keeps you from having nightmares.

In fact, we’re only starting to get a taste of how ridiculous they’re willing to be. The dialogue is so bizarre that I’m still impressed how well the entire cast manages to make it seem realistic for their characters.

Jamie Lee Curtis, as usual, pulls off the ridiculous dialogue, but the real stars of the episode were Lea Michele and Emma Roberts. Every time Hester – sorry, Chanel Number Six – called Chanel “mommy,” I wanted to cringe. I have no idea how Michele and Roberts managed to keep a straight face for even one take.

I’m sure that I’ll continue to be pleasantly surprised by the acting as they start to use more of the insanely large cast. I’m having trouble waiting to see more of Billie Lourd, which seems promising now that there’s some sort of flirtation going on between Number Three and pledge Sam.

Also, for those of you who may still be wondering why Number Three is constantly wearing earmuffs – Lourd is Carrie Fisher’s daughter and her earmuffs are her Leia buns. Get it? The writers are geniuses, I’m telling you.