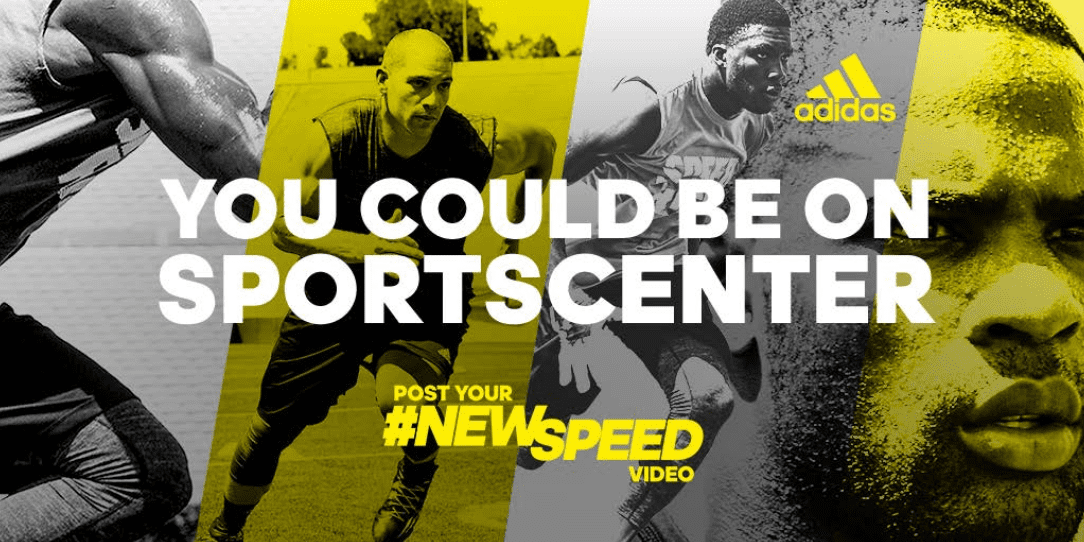 I can’t recall a time when football fans were openly given the opportunity to be in commercials, but it’s 2015 and the brand wars are in full effect. Adidas, a storied sportswear company that has been on the constant ascent to the top for the last five years, has decided to recruit fans of the brand’s #NewSpeed message to be featured in the adidas x ESPN Sportscenter #NewSpeed Mix Tape: Volume II.

I know, that’s a lot of words, but you can digest the entire master plan here, courtesy of our friends at adidas.

As part of adidas’ SPORT 15 ‘Create the #NewSpeed’ football campaign, adidas has teamed up with ESPN to give fans an opportunity to be featured on SportsCenter in the adidas x SportsCenter #NewSpeed Mix Tape: Volume II.

Fans can watch the ‘Create the #NewSpeed’ TV ad for inspiration:

Then go out and create and submit their own videos utilizing the hashtag #NewSpeed across social media channels.

For additional #NewSpeed inspiration, fans can also watch the videos on 10/5, 10/12, 10/19 on SportsCenter after Monday Night Football and follow the conversation on Twitter and Instagram via @adidasFballUS and https://www.facebook.com/adidasfootballus #NewSpeed #teamadidas.

To have the opportunity to be included in the new mix tape and be featured on SportsCenter, videos can be submitted between October 5th and October 21st. The adidas x SportsCenter Mix Tape: Volume II will be a compilation of user-generated videos and will air on SportsCenter on 10/27 following ESPN’s Monday Night Football.

About “Create the New Speed”

Sport does not progress on its own. The new 30-second adidas film titled ‘Create The New Speed’ is an inspirational and aspirational message for those who think and do things differently and for the next generation to create and showcase their own definitions of #NewSpeed.

Featuring Pusha T’s ‘Burial’ track, adidas and this new film are making a statement and marking the spot where the conventional thinking behind the game of football and the definition of speed will be buried and left behind. Every snap of the ball is a chance to create something new, an opportunity to take what you know, and reinvent it.

‘Create The New Speed’ is the newest chapter of Sport 15 by 72andSunny, which builds upon the recent launches of the ‘Create Your Own Game’ and ‘Unfollow’ and celebrates and inspires the creators and those who challenge the status quo. Driven by adidas’ mission to be the world’s best sports brand, the new film showcases the shift in how adidas approaches storytelling as a brand – through the lens of football, creativity and speed.