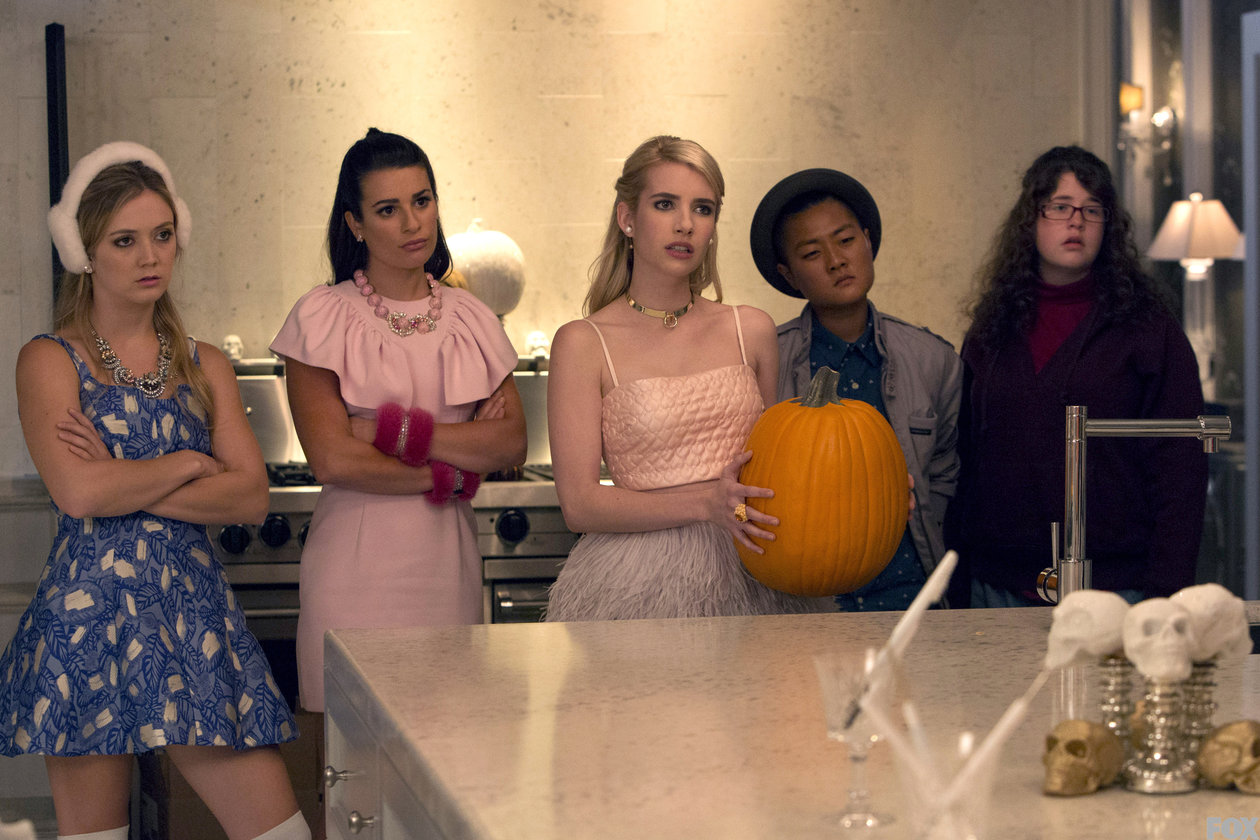 Chanel is going to make it her passion to destroy Zayday’s reputation.

Last night’s episode of Scream Queens kicked off its three week Halloween event. This may seem redundant with a show as gory as Scream Queens; as my boyfriend said, “I feel like it’s just a Halloween show.” Nevertheless, they managed to get even more into the spirit of the best holiday ever.

Apparently, I’m not the only one whose favorite holiday is Halloween. How could I not expect Chanel Number One to share in my love of the spooky season?

In a scene that clearly pokes fun at Taylor Swift and her recent celebration of “Swiftmas,” we learn that Chanel celebrates Halloween by bestowing her biggest fans with rotting pumpkins and dismembered limbs in celebration of, what she calls, Chaneloween.

It almost doesn’t seem fair to the rest of the Scream Queens cast, giving Emma Roberts such great moments as Chaneloween and her later scene where she sharpens knives at 3 am. Luckily, the other regulars are hilarious in their own right and they manage to hold their own.

In fact, Daniel Boneta actually managed to steal the show away from Roberts within the first ten minutes with his Matthew McConaughey impression. Pretty impressive for someone whose career started out in telenovelas. The only thing he didn’t do was drive off in a Lincoln.

Boneta’s character, Pete, is still investigating the people behind the death of tub-girl with Grace. They decide to take their lead to the only person who still has ties to that night.

That’s how they find Mandy, one of the Kappa sisters who left tub-girl to die. Dressed in How to Lose a Guy in 10 Days costumes, the two infiltrate Mandy’s trailer and get answers to some vital questions – most importantly that the baby born in Kappa house was a girl.

It’s a fun scene for Pete and Grace shippers, especially since Pete clearly got way into his couples’ costume character.

Two other possible couples also join their ranks this episode: Zayday and Earl Grey, who I’m officially rooting for, and Chanel Number Six (aka Hester) and Chad, who are clearly perfect for each other with their shared love of all things morbid.

Speaking of death, this episode had a surprisingly low death count, especially compared to the past few weeks. This of course meant that, for the first time, the most bizarrely hilarious scene didn’t also involve the tragic death of a character.

Instead, in a strange bout of female empowerment, Chanel Number One leads her Scream Queens minions in a vendetta against cat-calling frat guys. It was everything I didn’t know I needed in girl-power scene, and next time I’m beating up frat guys I will definitely quote Hester when she says, “you wanna see me smile? Well I’m smiling!” Followed by a swift kick to the crotch.

This episode also marked the first time I felt scared while watching Scream Queens. Granted, I’m a giant baby when it comes to scary things. But the scene where trailer park Mandy is brutally murdered, as well as Hester and Chad’s discovery of all the missing bodies in Zayday’s haunted house, definitely had me on edge.

Though we were already given a bunch of Scream Queens answers this week, I’m sure the writers aren’t done yet. Hopefully we keep getting mild scares and plenty of info as we approach Chaneloween.