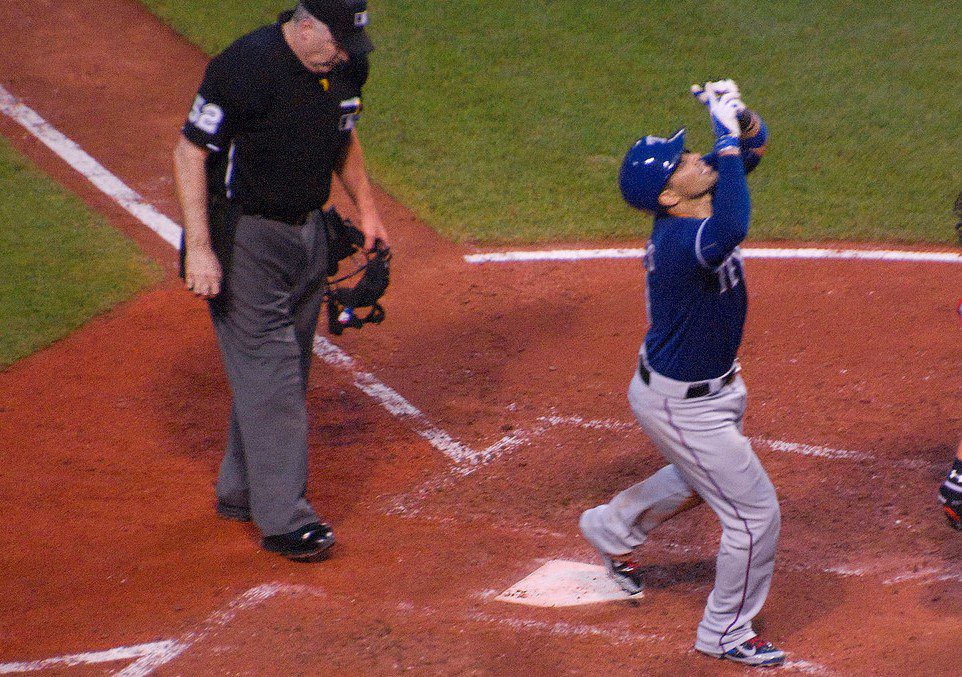 Once upon a time, there was an atrocious M. Night Shyamalan movie staring Mark Wahlberg (who acted like a Mark Wahlberg cardboard cutout) where this neurotoxin caused anyone and everyone who came in contact with it to want to off themselves suddenly. Today, with all eyes on Game 1 of the ALDS, that neurotoxin appeared to come in the form of third base.

During the top of the first with the score set at 0-0, Texas Rangers third baseman Adrian Beltre attempted to slide into second base in order to avoid a double play and appeared to injure his lower back. However, he entered the game gingerly during the top of the third and managed to knock in a run as he slowly jogged to first base, an excruciating look of pain plastered on his face. After some convincing from his teammates and manager Jeff Banister, Beltre, his eyes welling up with tears, slowly made his way off the field and was replaced by Hanser Alberto.

Third base victim No. 1.

During the bottom of the fifth with runners on first and second, Toronto Blue Jays third baseman Josh Donaldson attempted to break up a double play on a grounder by Jose Bautista by quickly speeding into second, only to be met in the head by second baseman Rougned Odor’s knee, who had leapt in the air in order complete the double play (he didn’t). As a precautionary, Donaldson was taken out of the game in order to be checked for a concussion.

Third base victim No. 2.

Regardless of losing Beltre early on in the game, the Rangers managed to beat the Blue Jays 5-3 in front of a deafening Toronto crowd with Yovani Gallardo on the mound despite belief from top ESPN analysts that the winner of a crucial Game 1 would be Toronto behind the arm of the dominate David Price.

It’s time to give a little advice to those particular analysts whose heads are clouded by stale statistics: this is the postseason – anything is fucking possible, especially when you underestimate the quiet genius of Banister.

Banister, in a rather eye-squinting move, left in reliever Jake Diekman for both the seventh and the eighth innings. Diekman is primarily known for knocking out lefties, so it made more than a few people scratch their heads by leaving him on the mound in duel innings to face a team composed mostly of right-handed batters. Diekman got the job done and retired all six players he faced.

In an interesting turn of events, Sam Dyson came in to pitch the ninth and preserve the lead instead of Texas closer Shawn Tollenson, who had 35 out of 37 saves under his belt during the regular season. This probably had to do with the fact that one of the two saves blown by Tollenson this season was against the Blue Jays.

Texas dominated offensively, especially off Robinson Chirinos‘ two-run homer in the fifth, extending their lead to 4-1. Odor also made himself heard after getting hit twice by Price (once in the third, second in the fifth – not surprisingly after he accidentally knocked Donaldson out of the game), the 21-year-old shut up the Toronto crowd in the seventh by sneaking a line drive over the wall in right field.

For apparent underdogs, the Rangers made sure they were heard loud and clear on Thursday afternoon, proving that the only neurotoxin plaguing baseball is the opinion of an ESPN analyst.