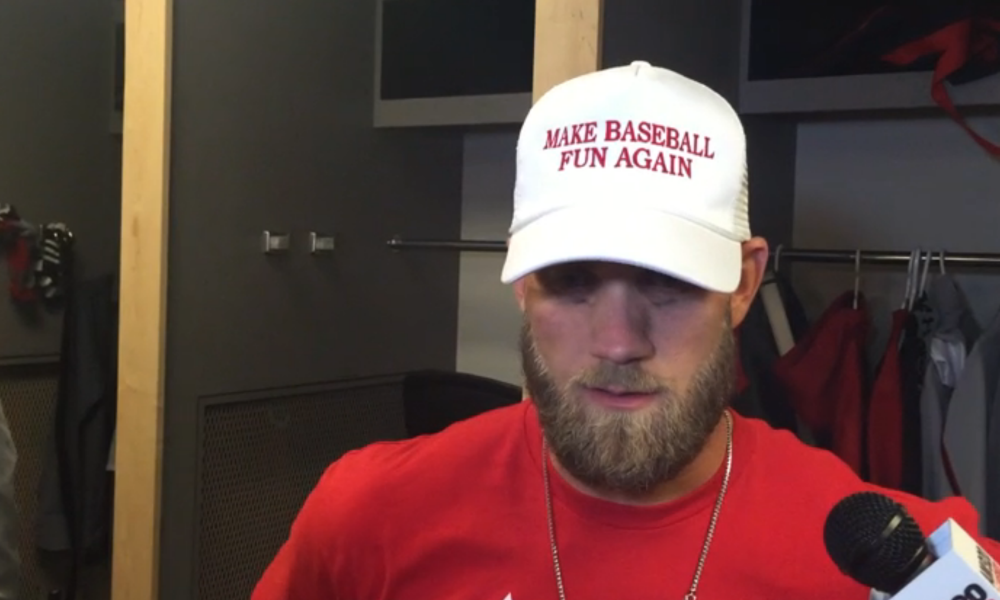 Screen capture courtesy of the MLB/YouTube.

Fact: Baseball is not fun.

Fact: Some baseball players are fun.

Fact: The former is destroying the latter.

Why must the cycle of baseball news follow the Odor pattern? Why must the Greatest Bat Flip Known to Man be a culture war flashpoint?

Baseball is America’s most racial sport. Unlike basketball and football, baseball’s prominence was cemented during the Jim Crow Era. The game was played aggressively, and Babe Ruth’s stardom was not a reflection of his unmitigated prowess, but rather his joyfulness. Ty Cobb was not fun. Jimmie Foxx, Mel Ott, Walter Johnson, Connie Mack and John McGraw didn’t set the room on fire. Except Ruth – he bashed baseballs regularly with a shit-eating grin. Ruth’s “hobbies” were fun too – who doesn’t enjoy stories of Ruth being dragged out of brothels only to murder baseballs!

Ruth was the exception to baseball’s Puritan’s ethic.

He played hard. He ran hard, hit hard – a whole race’s inclusion hinged on his success.

Jackie astonished those unwilling to be astonished. Thefts of home are always dangerous.

The white game has always been competitive, but Jackie was a veteran of the Negro Leagues. Negro League baseball was just as competitive, but it was also fun. The barnstorming structure required this. If the game wasn’t fun, no fans attended. Their African-American audiences had to pick and choose their entertainment. The ballplayers needed to be the best show in town.

Jackie played in a league where Satchel Paige, Cool Papa Bell, and Josh Gibson’s showmanship augmented their prodigious talent. Jackie did not entertain for the sake of entertainment in the way of Ruth or Paige, instead marshaling his prowess to bend the arc of a baseball game to his will.

Willie Mays was similar to Jackie Robinson – the defensive wizardry combined with offensive firepower made 1950’s baseball in New York the best ticket in town, even though the Yankees dominated the decade. The 60’s and 70’s would have numerous players who could be classified as fun: Mark Fidrych, Bill Lee, Luis Tiant, Reggie Jackson, Maury Wills, Roberto Clemente, Dock Ellis, the Niekros, Gaylord Perry – the list can get expansive.

The 80’s and 90’s gave us Bo Jackson, Ken Griffey Jr., Pedro Martinez, the 86 Mets, etc. The bottom line – baseball was fun. However, the last time baseball seemed to be fun involved Tom Glavine and Greg Maddux lamenting that chicks dig the long ball. There have been interlopers – the 2004 and 2013 Red Sox had fun at every turn.

Yet something happened in baseball. African-Americans no longer play the sport – data shows a smaller percentage of African-Americans play baseball than make up the population of the United States. Latino players are 28 percent of the game, and there are a handful of Asian ballplayers.

The game is overwhelmingly white. The tension in baseball is not racial, but the concept of “unwritten rules” and “showboating” has conflicts along racial lines.

Some examples:
– Yasiel Puig comes in the league and immediately he doesn’t “respect the game” because he flips his bat and overthrows the cut-off. He’s also late for various team functions.
– Jose Bautista hits the most important home-run since Joe Carter in 1992 and flips his bat.
– Manny Ramirez’s whole career (aside from the steroids) is a study of whimsy and fun in the face of glaring disapproval
– Carlos Perez dances after strikeouts and is immediately castigated.
– Nyjer Morgan is everything wrong with the game due to his Tony Plush persona.

These are the first things coming to mind, but the pattern remains. The game is populated and taught by old white men who take things too seriously and then pass down those stupid ideas to younger generations. For example – I coached high school baseball for a while and fought with our team’s pitching coach because he wanted our pitcher to hit a batter because the batter “took too long to get in the box.”

Even the walk-off home-run dog-piles get cold water dumped on them because of the occasional injury – though, in fairness, Kendrys Morales’s injury was horrific.

Baseball is a children’s game played by adults for millions of dollars. If you’re reading this, chances are you’d trade places immediately with any one of these players – I surely would. So why does baseball need to be so damn stodgy?!

There are a few solutions. The first is to soundly dismiss any of those unwritten rules types. The Diamondbacks finally fired Kevin Towers and Kirk Gibson – two men exuberant about using baseballs as weapons – only to hire Tony La Russa. La Russa’s teams are notorious for their adherence to unwritten rules as noted by the Pittsburgh Pirates’ broadcast team. Make a clear rule – if the umpire believes there was a shred of intent behind a hit batsman, the pitcher must be tossed immediately. We can even call it the Syndergaard Rule. Baseballs can cause serious injury to players, so intentional HBPs need to join the Dodo Bird in extinction.

The second is embracing the cultural shift in baseball. Currently, there are no Latino managers and one Latino owner in a game where 28 percent of players are Latino. Diversity and access is always a tonic for invigorating stale environments. A parallel for this idea can be the United States Congress. The Republican delegation overwhelmingly white, male, and Christian – this demographic is over 90 percent of their delegation. The Democratic delegation for the first time has more minorities, women, and non-Christians making up their delegation than white male Christians. Look at the result – Republican politics is one of seeing the past as all that was good and right in America, while the Democrats look to the future as the tonic for our current problems. Diversity works.

Finally – let the players have fun! Bryce Harper is a breath of fresh air. Yasiel Puig genuinely loves being on the field. Jose Bautista’s bat flips are epic. Encourage this. If a pitcher records a big strikeout, who doesn’t love a fist pump. Why are fans allowed to celebrate but ballplayers must be stoic?! One of my favorite memories of the 2004 Red Sox was attending a game in late September. The Sox were playing the Orioles and the game went into extras. My buddy and I sat in the front row of the centerfield bleachers next to the Green Monster. Fenway was in full nausea-mode because the Sox kept trying to snatch defeat from the jaws of victory.

Finally, in the 11th inning, Orlando Cabrera got around on a pitch and sent it over the Monster and into the Boston night. We jumped up and down and the players were ecstatic.

Baseball today feels like a joyless endeavor. The past three weekends are not about the surging Pirates and Giants or the intrigue of the Mariners. Instead talking heads reflect on intent behind pitches. This is a terrible state for the game. Last season saw the first steps towards quickening the pace of play, but retribution/brush-back pitches and fun policing serve the opposite effect of what sport should be.

Embrace Bryce Harper’s message about making the game fun. Get out of the business of plunking batters and stop enforcing stupid unwritten rules.

I know this – if I hit a ball like Jose Bautista did, I’d pimp the shit out of it.

And so would you.