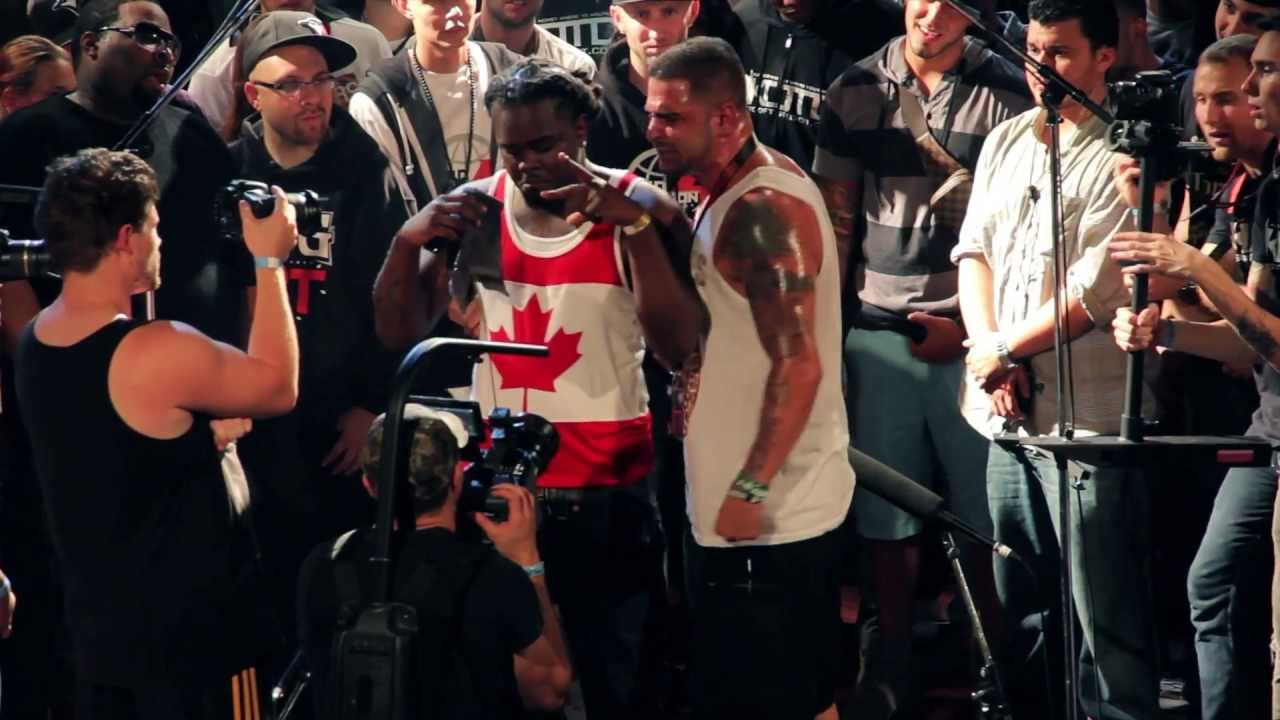 KOTD is the top battle league on the planet. Their video quality is unmatched. The Canadian entertainment brand always has the strongest battlers from all over the world in their events. This Saturday, for the “Back to the Baysics 3” event in San Jose, California, the excellence is no different. As you can see on KOTD’s Twitter page, the show is getting swamped. No more tickets are being sold online, and only a limited amount will be possible to buy at the door.

Your best option at this point is ordering the pay per view. That’s the route I’m taking. Go to kotdtv.com for the chance to watch the entire Saturday event from the comfort of your own home. With that groundwork taken care of, allow me to bring you my detailed preview of the “Back to the Baysics 3” event.

The Saurus vs. Fresco

Reverse Live vs. Only One

As you can see, this is a Bay Area friendly card. Pass, Caustic, and Dirtbag Dan are three of the various artists from California, these three specifically being from the Bay. Big names are plentiful here and literally every battle is enough to create excitement. I’ll start from the top and work my way down.

Dizaster/Gjonaj
This could be a body. Gjonaj has been referred to as Dizaster’s clone. Watching his aggression and delivery certainly makes that comparison look accurate. Oddly enough, Gjonaj doesn’t have a major resume. Yet he’s in the headlining battle of a KOTD event against arguably the most popular battler in the world. How’s that? Gjonaj talked all kinds of noise about Diz online. It appears that Diz is seeking the opportunity to destroy his clone, silencing any comparisons of their talent levels in the process.

No battler has more haters than Diz. From punching Math Hoffa to being the opponent in that strange Canibus battle, the man is a source of controversy. But making him angry isn’t a wise decision, one Gjonaj should regret. I see Diz being extra aggressive because of the personal attacks. If Gjonaj comes with his trademark intensity, how will that look next to the guy who essentially fathered that style? In other words, you can’t out-style Dizaster at his own game. Look for Diz to leave his opponent reeling after the main event.

Pass/Arsonal
Pass being from Oakland has always made me follow his career. He’s been active since before the scene exploded, but the man doesn’t oversaturate himself. Pass carefully picks battles between making music, giving him a certain allure since fans don’t see him insanely often. 2015 is the first year Pass has experimented with putting himself out there more, and Arsonal, the self-proclaimed most viewed battler in the world, is the result.

This is a wild matchup. Pass typically out-raps his opponent with street style bars and quickly released multis. Arsonal is the king of disrespect, and talking about the kids Pass has seems like a definite angle. Arsonal’s recent battle featured a significant choke against Shotty Horroh. He’ll be looking to avenge that here. Nevertheless, I see Pass gaining confidence with the crowd by his side and edging out a victory.

Bigg K/Caustic
This is one of my most anticipated battles on the card. Ever since he beat Illmaculate, Bigg K has gained massive respect in the battle scene. It’s worth noting he was a monster before destroying the Portland native. Bigg K uses masterful multis that blend with his razor delivery and physical size. The guy is simply a scary opponent in the ring. His value has skyrocketed as those booking battles have recognized his appeal.

The opponent is Caustic, the most personally direct and ruthless active battler. Caustic has a trend of exposing information that he claims is confirmed. For comparison’s sake, some battlers like Arsonal make up personal angles, Caustic tries to rely on factual ones. In this showing, I’m not sure Caustic’s normal approach will work on the crowd friendly Bigg K. Killing a Megadef or lyrically weak Marvwon isn’t a major deal for Caustic. Bigg K is something else. The out-of-towner slightly takes the victory.

The Saurus/Fresco
This battle should excite fans from the Grind Time days. Fresco has famous past clashes against Kid Twist, Rone, and Soul Khan. He looks like a One Direction member yet he holds his own in the battle ring. Like Pass, Fresco doesn’t oversaturate himself. Rarely appearing on cards gives a beloved name extra weight. I’ve never been a massive Fresco fan, but I’m genuinely excited for his return. That’s the power of avoiding oversaturation.

He could be running into a buzz saw, though. The Saurus has been one of the best performers for about a ten year period. Battling’s emphasis on multis is partly in thanks to The Saurus. He helped make quality and thoughtful multis be a staple in written battle leagues. Because of the continued activity and etched in sharpness for The Saurus, I don’t see Fresco being able to overpower him. It’ll be nice to see Fresco back at it, but he can’t be saved once Organik starts the clock on The Saurus. The legend wins.

Dirtbag Dan/DNA
Dirtbag Dan has famously been imitating DNA’s trademark goofy voice and style for some time now. Hilarious in his battles and on his show with Caustic, the San Jose product should literally feel right at home. It’ll be a combination of catering to the crowd and mocking DNA’s voice from Dan. What’s more, the self-titled Dirtbag hasn’t been as active with battling as DNA, a positive decision.

The New York rapper is the prime reason why one shouldn’t oversaturate himself. Reason? DNA is talented and creative, but I can’t stand him. I’m sick of his forced multis and squeezing together of stretched word play. Simply put, he battles too often. There’s no surprises anymore. Dirtbag Dan isn’t going to be denied in his home area. Comedy and personals will lift him past DNA in a decisive victory. The hometown product takes the win.

Daylyt/QP
This is the most unpredictable battle on the card. Two enigmatic foes will be squaring off in what can be an epic showdown if both bring their best. Daylyt is either mentally unstable or he simply enjoys creating drama. Just YouTube the guy and watch any interview he’s in. Daylyt is plan weird. But as he showed against Iron Solomon, if the man hailing from Watts in Los Angeles puts out effort, he can be a force.

QP has always been a wordplay heavy rapper. He was stretching schemes and slowing down material before it became popular on a widespread level. Since the Grind Time days, QP hasn’t been super active on the scene. But he’s a talented individual with some of the wittiest past bars on this card. If he gets the best of Daylyt, the weird rapper should win. I’m not willing to have that faith, though. I see QP coming strong, and I’m banking on Daylyt not putting in max effort for two straight battles. QP wins.

Reverse Live/Only One
Reverse Live is a rugged rapper. Not a name quite like the headliners on this card, Reverse is still a veteran. He’s been battling since the earlier mentioned Grind Time days. I’m extremely excited to see him on this card. His recent clash with RemyD shows how sharp he is at his best. It’s also worth watching the Dirtbag Dan Show episode featuring Reverse and Caustic. They discuss preparation and thoughts for this event.

Lesser known than Reverse is Only One. He had a quality battle with Joe Cutter with the consensus being that Only One smashed him. His inexperience could be a factor against an individual with a quality history such as Reverse. At the same time, Only One should have confidence because of his fresh kill. I look for beginner’s buzz to cool off a bit as Reverse Live delivers a performance capable of improving his status in the KOTD ranks. Reverse barely edges out a victory.

Mad Flex/Lu Cipher
I’d consider Mad Flex less enjoyable to watch than Lu Cipher. His battle against Megadef was a decisive victory for Mad Flex. Other than that, he also took on Psycoses and has developed a degree of admiration for his wordplay. Nothing that I’ve seen from MadFlex makes me too hyped about his inclusion on the card.

Lu Cipher, on the other hand, is nasty. Peep his Troy Brown battle or any of his past footage to prove this point. Usually rolling with his rap crew and channeling a stream of consciousness type flow, Lu Cipher could be one of the most complex battlers on this card. It’s awesome to see him have this opportunity provided by KOTD. Lu Cipher has complained during battles about not being booked for quality events. This is his chance to alter that narrative. Lu Cipher’s creative bars give him the win.

Coma/Frak (GZ Battle)
Coma is an emerging threat. He takes on the comical Frak in what will be a Ground Zero battle. As mentioned in the Coma article linked earlier in this text, Ground Zero is basically a prove yourself league within KOTD. I love how the KOTD staff chose to include this GZ showing on the card. Frak is a goofy battler who is something of a throwback. He’s gifted at impressions and controls the crowd with his humor.

That won’t be the recipe to beat Coma. If I just did an entire article on Coma, how could I not pick the guy? His bars are vicious and vivid. Hunger isn’t a lacking point for Coma. Capitalizing on the biggest moment of his battle career, I see Coma destroying Frak in, shall we say, a vicious manner. Comedy can be trumped by intensity if the angrier bars are delivered sharply. I’m all for jokes in battles, but I’d rather see two opponents rip each other apart with violent thoughts and disturbing imagery. That’s where Coma will shine.

If you lost how to view this event through all my words, just go to kotdtv.com. The price for this PPV is $25 at the time of this writing. That’s more than reasonable for nine battles and a daytime of entertainment. Of course the video quality isn’t YouTube publication level on a live stream PPV, but so what? There’s a raw, immediate feel to a live rap battle. You get to see what’s later edited out. As the world goes about their normal Saturday, you have the chance to watch multiple grown men take the heads off other grown men. I can’t imagine a better weekend activity.