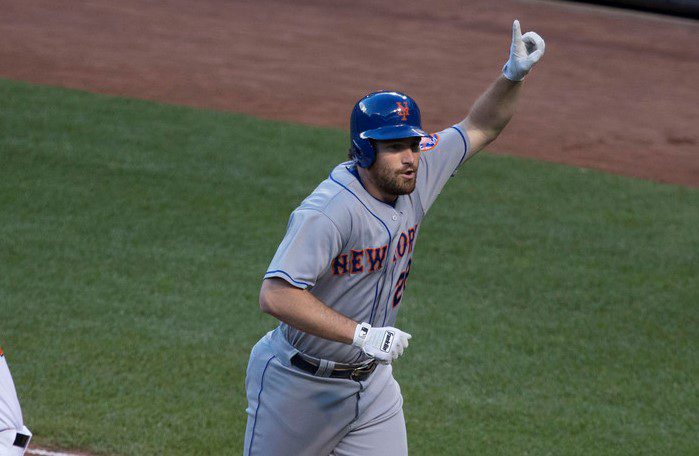 After their magical run the NLDS, the Chicago Cubs area heading home, for good.  With their backs against the wall down 3-0 to the New York Mets, the Cubs were in a win-or-go home scenario.

At the top of the first inning, the Mets showed they wanted to win this game just as much as the Cubs.  With Curtis Granderson and Yoenis Cespedes on base, Lucas Duda stepped up to the plate and gave the ball right back to the Cubs. Fans that is, as he homers Jason Hammel‘s pitch into the centerfield crowd. Putting the Mets up 3-0 in he 1st inning.

On the very next pitch, Travis d’Arnaud mimicked Duda saying ‘anything you can do, I can do better.” And them promptly homers to right-center to give the Mets a early 4-0 lead over the Cubs.

After the Cubs failed to get on the scoreboard in the 1st, the Mets took advantage in the 2nd inning.  Lucas Duda was at it again and hit a double, sending home David Wright and Daniel Murphy, pushing the Mets lead to 6-0, after just two innings.

In the bottom of the 4th inning, the Cubs had a golden opportunity to get back in the game.  With the bases loaded, the Cubs got three hits, but only scored one run, leaving the Mets with a convincing 6-1 lead.

Then to put the nail in the coffin, the Cubs worst nightmare came back to haunt them in the 8th inning.  Daniel Murphy hits his sixth-straight HR in the postseason, setting a new MLB record, giving the Mets a 8-1 lead.  Murphy now has a total of seven HRs this postseason.  The Cubs would score two late runs in the bottom of the 8th off of Kris Bryant HR, but the Mets won in convincing fashion, 8-3 and now head to the World Series for the first time since 2000.

The Mets will face the winner of the Kansas City/Toronto series, while the Cubs will have to watch the World Series from home. I guess Back to the Future didn’t get everything right.