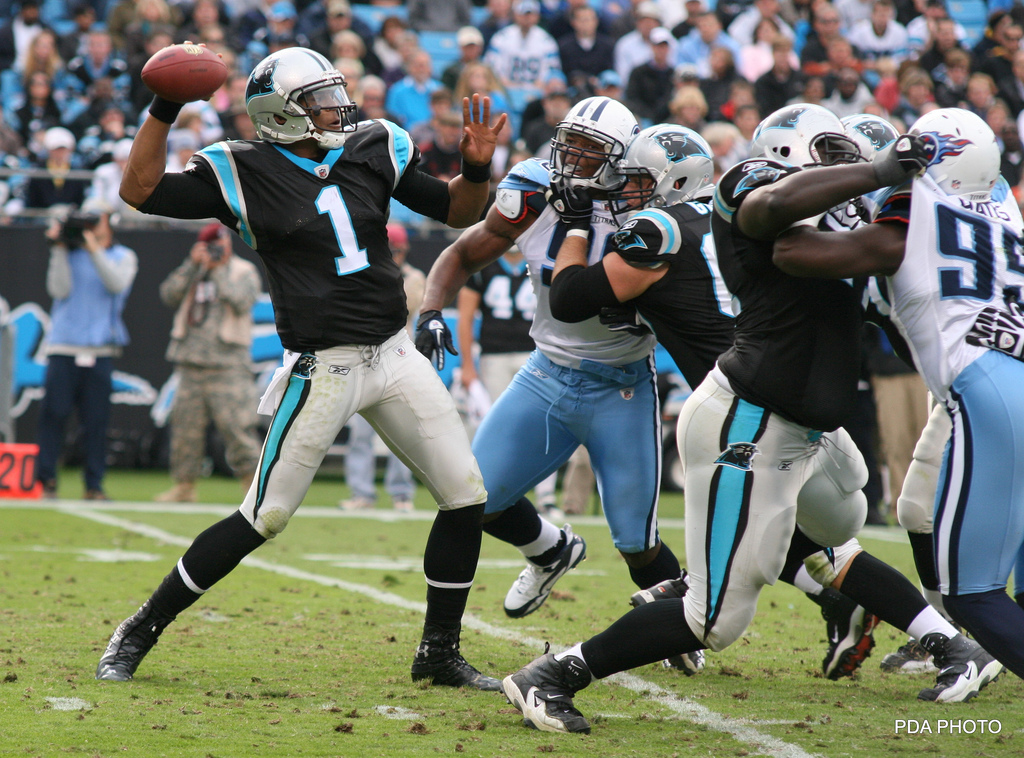 Three things I need to make note of:

First, have you guys been checking out my Top 50 NBA Players Countdown, right here on Baller Mind Frame? You haven’t? Well now is the perfect time to do so! So, umm yeah, let’s get on that!

Second, did you know that the 2015-16 NBA season starts in just five days? Raise your hand if you’re excited! Put your hands down guys, you’re embarrassing yourselves.

Third, today mixed in with my NFL Week 7 picks I’ll have a few random NBA predictions too. Last year I did this, and I nailed almost all of them. I predicted the Atlanta Hawks would be the sleeper team in the NBA (I pegged them winning the Southeast Division), the Chicago Bulls winning more games in the month of November than the Chicago Bears would in the entire season (Bulls won 10-5), and I had Dwyane Wade missing more total games than the Indianapolis Colts would win in the regular season and Playoffs combined (Wade missed 20 games, the Colts won 13). I figured since it was so much fun last year, I might as well give it a try again. The good news is now we can call it a tradition!

Seattle over SAN FRANCISCO
To quote the best rapper to come out of the 313, Jimmy Smith Jr. (Aka, B-Rabbit), “If something needs to happen with this shit, it needs to happen now.” That goes out to the Seattle Seahawks, who are 2-4 and desperately need to get back on track if they are going to turn their season around. 8 Mile is such a good effing movie, man.

Buffalo over Jacksonville
Here are two safe rules to follow for picking these wacky London games each year. First, always pick against a team if it’s in play that their head coach might get fired on the long plane ride back to the United States, just because that’s funny to think about. Second, always pick the team that has more talent. If this game were in Jacksonville I’d be half tempted to pick the Jags just because of all of the finger-pointing and blame-placing and “we should be doing this” chatter going on in Buffalo. But as far as I can tell, Rex Ryan isn’t going to get fired if Buffalo loses this game, so the second rule applies.

The Highest Individual Scoring Game of the NBA Season over The Highest Team Scoring Game of the NFL Season
New England set the bar back in Week 3, dropping 51 points against the aforementioned Jacksonville Jaguars, and 52 isn’t that high of a mark to have to hit for a season high total. For the record, the last two years I’ve nailed this pick in one of my columns. Two years ago I predicted that an NBA player would score sixty points in a game (Carmelo Anthony and LeBron James both did it) and last year Kyrie Irving‘s 57 point outburst in San Antonio beat the NFL game high mark by one point.

WASHINGTON over Tampa Bay
Atlanta over TENNESSEE
DETROIT over Minnesota
So Joe Philbin got the ax first this year (I must say, that wasn’t all that difficult to predict), but the question now becomes whose next? My guess: either Ken Whisenhunt (he might be a truly terrible head football coach), Lovie Smith (he should still be coaching the Chicago Bears), or Jim Caldwell (the poor man’s Lovie Smith, in terms of lack of animation, gusto or a pulse on the sideline). Best of luck gentlemen!

INDIANAPOLIS over New Orleans
Some day I’m going to write a 2,000 word breakdown of Indianapolis’ asinine fake punt attempt against New England last Sunday night, but I need to let the idiocy of the play to marinate a little while longer before I touch it. Anyways, I’m not too too worried about the Colts. They competed against New England, kept the game at a respectable distance, got the predictable back-door cover late and sit at 3-3, atop the AFC South division. New Orleans might have gotten their last marquee win in the Drew Brees/Sean Payton era last week against the formerly undefeated Atlanta Falcons. It’s been a good run, and I’m already looking forward to the next Sean Payton era, either in Miami or Indianapolis.

Anthony Davis‘ GOAT Potential over Andrew Luck‘s GOAT Potential
I love me some Andrew Luck, but he’s not moving the needle like Anthony Davis is threatening to do. Here’s the thing: Andrew Luck is an excellent quarterback, and if I had to bet on it I’d say he’s going to end up in the Pro Football Hall of Fame some day. Anthony Davis is a transcendent basketball player, someone who could very well end up revolutionizing the NBA. Seriously, if this dude’s three point stroke is as good as it’s looked in some of these practice videos, now we’re talking about some sort of Tim Duncan/Dirk Nowitzki/Hakeem Olajuwon/Kevin Durant hybrid that could win the next eight MVP’s and end up with six rings.

NEW ENGLAND over New York Jets
The last three times the Jets have went to Foxborough they’ve lost by eight total points, so there isn’t much reason to expect that New England will win in a romp. But it would be silly to expect anything other than a Pats win. Aside from last years meaningless Week 17 game against the Bills, Tom Brady hasn’t lost a home game against a divisional opponent since 2006.

New England’s Chances of Repeating as Super Bowl Champions over Golden State’s Chances of Repeating as NBA Champions
And this says quite a bit because Golden State is my pick to win the 2016 NBA Championship. Here’s my rationale: I just don’t see a great team in the NFL right now. Every team is flawed in some way, and some contenders are more flawed than others. But if we enter the Playoffs, assuming all teams are moderately healthy, I’m going to bet on the team with the best quarterback and the best coach, and that’s New England.

The NBA is way more top heavy than the NFL right now, and there are many more variables you need to consider when figuring out a team navigating through the NBA postseason. You need luck (yes, the Warriors were lucky last year, just like every other NBA Champion ever has been lucky … let’s move on with this stupid take), you need good coaching, you need depth, you need star power and you need to stay healthy through the entire two month marathon that is the NBA Playoffs. And in the Western Conference, it’s only more difficult. In all likelihood, the Warriors are going to need to play two of the following six teams — the Spurs, Clippers, Thunder, Rockets, Grizzlies and Pelicans — on the way to the NBA Finals, where they would likely have to play LeBron and a presumably more-healthy-than-last-season Cleveland Cavaliers team … not exactly a cake walk.

Pittsburgh over KANSAS CITY
You might see a third-string quarterback playing on the road in a usually rowdy stadium, but I see a bunch of Steelers weapons poised to put up a ton of points against a bottom ten defense, and a Chiefs offense that can’t possibly match that kind of firepower. Boy, I sure am glad I picked the Chiefs to win the AFC West.

ST. LOUIS over Cleveland
So back in early September I did a Fantasy Football Draft with some of my co-worker friends and my draft strategy was pretty simple: make sure to draft a top five quarterback, multiple good wide receivers and a solid tight end early, and wait on running backs, maybe even load up on rookie RB’s since there is at least one each year that ends up in the top seven in fantasy production. So I drafted Aaron Rodgers, DeAndre Hopkins, T.Y. Hilton, Travis Benjamin, Steve Smith Sr., Tyler Eifert (not in that exact order, but all of those dudes are currently on my roster). Hey, not too bad, right? My running backs: Melvin Gordon, TJ Yeldon and Duke Johnson Jr., also known as the three rookie running back’s that aren’t Todd Gurley. The lesson: Fantasy Football ruins your life.

NBA Scoring Leader Points Per Game over Peyton Manning Total Interceptions
This one’s a relatively safe bet, though it’s worth bringing up because coincidentally, the last time that a quarterback threw more interceptions than the points per game of the NBA’s highest scorer was in 1998 when Peyton Manning topped Allen Iverson by the final tally of 28-27. Manning has ten picks already (three against Cleveland last week, and a couple that the Browns couldn’t capitalize on) and the Broncos haven’t even encountered any bad weather yet. Manning might get into the mid-twenties, but probably not high enough to topple Durant, Westbrook, Harden, LeBron, Davis or whoever leads the league in scoring this year.

NEW YORK GIANTS over Dallas
Guys, don’t let the Giants Monday Night Football stinker throw you off their scent. Remember, we’ve seen this movie before. In case you forgot, the last time the Giants won the Super Bowl they were 7-7 with two weeks left in the season. The time before that they started 0-2. They’re toying with you right now! Did you know the Giants are 30/1 right now to win the Super Bowl? Vegas is just begging you to take their money! And for what it’s worth, if we’re looking at Super Bowl odds and assessing where you can get the best value, I don’t hate the Cowboys at 50/1 either. If they can find a way to sneak into the Playoffs with Tony Romo and Dez Bryant healthy, who knows what can happen.

New York Giants and New York Jets combined wins this season over New York Knicks and Brooklyn Nets combined wins through November 30th
For the record, the Knicks and Nets have 35 combined games through November 30th, and the Jets and Giants each have 32 combined for the season. This pick might not look like a tremendously bold prediction; it was more to highlight my disdain for the currently state of professional basketball in New York City. For the record, my prediction is that the Jets and Giants will have 18 wins and the Nets and Knicks will have 13 wins.

CAROLINA over Philadelphia
Riddle me this: why shouldn’t Carolina be giving a full three points, if not more, against the Philadelphia Eagles at home this week? Last I saw the Panthers were favored by 2.5, indicating that the Eagles are better on a neutral field. I don’t understand the logic of this, not one iota.

Important Note: The last time I complained about a betting line giving the Eagles an undeserved amount of respect, Philly piss-pounded the poor New York Jets and I got that game wrong. So take this prediction with a few spoonfuls of salt.

ARIZONA over Baltimore
Well this certainly isn’t the most appetizing Monday Night Football game, now is it? The good news, at least for all of the NBA fans reading along, is basketball season starts the day after this game. Let’s go!