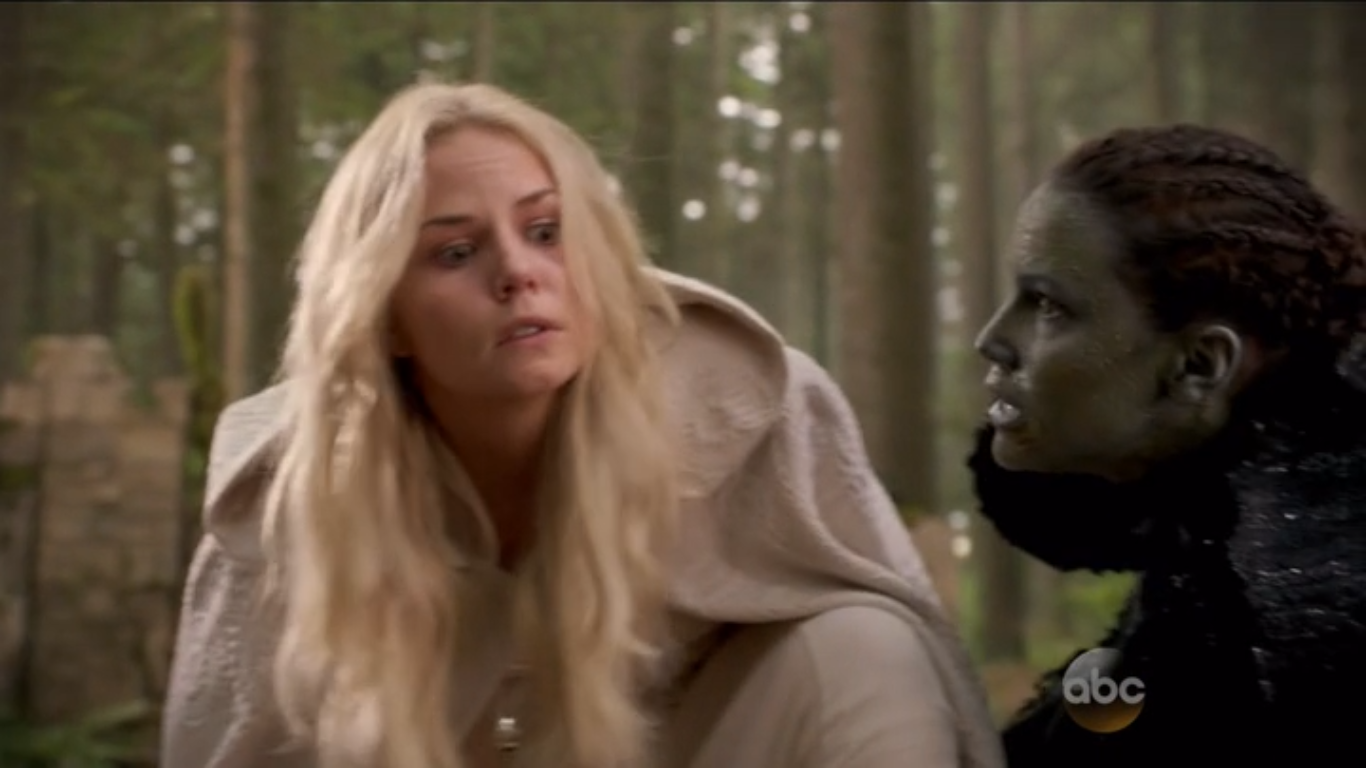 This week’s episode of Once Upon a Time may have been my favorite episode of the season so far. Sure, there are still a few unanswered questions like: where is Merlin now and how did Emma turn dark? But there was still plenty of information, so much so that I ran out of room for notes.

One of the first things I noted was that the chalice – which we later learn to be the Holy Grail – was similar to Excalibur in that it turned those not worthy to wield it to dust. Which, duh, because we also learned this Once Upon a Time episode that Merlin forged the Holy Grail into Excalibur in an effort to cut down his immortality to be with the woman he loves.

Too bad that the theories about Nimue – the woman in question – were right; she was indeed the first Dark One. The writers of Once Upon a Time spent the episode toying with the possibility, making you believe it one second with quotes such as: “I know what it’s like to lose someone to the Dark One,” and then making you doubt your deduction skills the next second with others like, “this is where the first Dark One killed Nimue.” Of course, what Merlin really meant is that when Nimue became the Dark One she killed the woman she used to be. Mhmm, sure. He was still probably being intentionally misleading.

It was interesting, however, to finally get some insight into Merlin’s backstory, as well as to see the progression of Nimue’s darkness. There were some hints thrown in by the Once Upon a Time writers that the darkness was already within her, for example her desire for vengeance upon Vortigan, and her eagerness to drink from the Holy Grail and become immortal. There was also the fact that Merlin couldn’t use his magic on Nimue (which I’m hoping made other people besides me think of Twilight, otherwise I’ll have to be embarrassed) that should have made Merlin suspicious.

This episode was a quality one because it was reminiscent of some of my other favorite episodes of Once Upon a Time. There were multiple twists and red herrings within the Merlin and Nimue storyline that I was completely transfixed and on the edge of my seat the entire 41 minutes and 34 seconds.

Not to mention the other source of drama, the possibility that Emma would kill Merlin once she was face to face with an (I think?) imaginary Nimue. Both Merlin and I were worried. I was sure that would be the reason behind Merlin’s absence in Storybrook, as well as Emma’s darkness – Merlin does say this episode that “if you kill your magic will turn dark.” But I guess those are answers for another day.

What we did get an answer to, however, was the ever looming “will Emma reunite Excalibur and the dagger or won’t she?” It was the last thing she did this episode, though it was obvious throughout that that would be how they ended this week’s episode of Once Upon a Time. However, I would like to let it be known that I’m still holding on to my theory that she’s not planning on eradicating all lightness like everyone in Storybrook keeps saying.

There was a moment in this Once Upon a Time showing during the Camelot flashback where she asks Merlin, “is it possible for someone to have a darkness but use it for good, use it to protect people?” I hope that was a hint to her real intention, because I’d really like to be right for once.

There were some other great moments this episode that I’d like to point out. The first being the inclusion of a young Apprentice in Merlin’s backstory. At one point Merlin tells his Apprentice (still didn’t catch a real name) to “go check on the brooms” which I’m sure was a little hint towards the walking brooms that previous episodes of Once Upon a Time borrowed from Fantasia. I love little moments like that, sequences that you almost miss but then catch later.

The next thing I wanted to point out was more of a realization about Zelena that I had this Once Upon a Time installment. While the Storybrook gang falling for Zelena’s nice act yet again didn’t quite shock me, what did shock me was how similar Zelena is to Regina. Of course, they both have some serious issues with their mother, but even more than that – they’re both so sarcastic and quick with the one-liners; Zelena’s best ones this episode being: “I do love hearing a sensible person talk” and “if Sir Castic would let me speak…”

While it’s great that Zelena is always there for the Once Upon a Time writers to rely on to stir up trouble and double cross everyone over and over again (do they ever learn), I almost like it better when we get to see this real side of her, a side that’s so similar to Regina it makes me wonder if I could learn to love her too. It’s just unfortunate that 90% of those times we think we’re about to see a real side of her she’s just pretending.