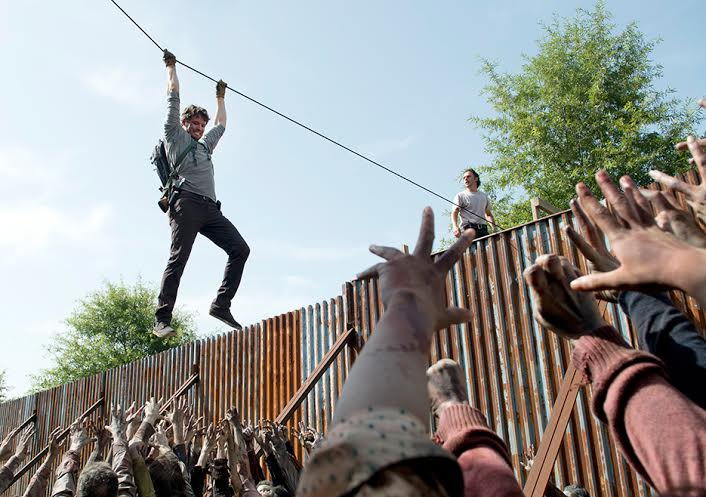 I’m going to go ahead and start this week’s The Walking Dead review with the Kill Count. See if any differences jump out at you:

Do you see it? That’s right, people, Glenn added to his walker kill count in this episode of The Walking Dead because he’s STILL ALIVE. I mean, I knew it all along and was never outright worried. Let’s all let out a collective sigh of relief, and jump head first into this review!

Glenn being alive is definitely the highlight of what is a pretty slow episode for The Walking Dead standards on all other fronts. That doesn’t mean it still wasn’t a great episode, it just didn’t have the excitement we’ve gotten in recent weeks.

Spencer had a bit of an accident trying to be a hero, and my prediction about his death almost came true. I guess he just didn’t have enough alcohol in his system when he tried to use a grapple-hook to traverse over the horde of walkers. His time is coming, though, I promise.

One theme that presided over this episode of The Walking Dead was that of the annoying teenager. Enid, Carl, and Ron all get some significant screen time, and send whiny, think-they-know-everything meters through the roof. Enid spends the episode arguing with Glenn about the proper way to go about living life, so I automatically disliked her part. I thought that MAYBE Carl was getting a little more mature, but he spends an entire scene making smug “I’m smarter than you” comments to Ron while Rick is showing him how to shoot. I was seriously half expecting Rick to tell Carl to shut the hell up, because he was being obnoxious. Not that Ron didn’t deserve a little verbal heckling, because he’s equally as annoying as Carl.

In the biggest bonehead move in recent memory (besides Spencer trying to play Sylvester Stallone’s character from Cliffhanger), Rick gives Ron a handgun to carry around and get the feel of it. It took Ron all of fifteen minutes to get his own ammunition for the weapon and now we have an angsty teen with a loaded gun on the loose. This is honestly the biggest threat that Alexandria has faced yet.

Well, at least Carl is in trouble. I’ve always rooted for Carl’s exit from The Walking Dead in a gruesome fashion, but I’m actually going to be pissed if it’s Ron that causes this to happen. Carl deserves a little more than that.

Morgan still has his captive and is trying to what, turn him to the good side? There’s no Jedi here, and we don’t need balance brought to the force. Morgan needs to start killing people. I know he has his “All life is precious” code, but Michonne had the best response to this: “Things aren’t as simple as four words.”

Although this episode of The Walking Dead was on the slow side, it was a great lead up to what is sure to be a bat-shit crazy mid-season finale. Part of the wall is now down, and walkers are soon to be pouring into Alexandria by the thousands. Well, that’s what they want us to think at least. I’m not sure it will be that easy for walkers to get in right away, and all of them getting in at once would mean the fall of Alexandria, which probably isn’t on the horizon. We’ll have to tune in next week so The Walking Dead can tease us with something shocking only to make us wait a few months to actually find out what happens!