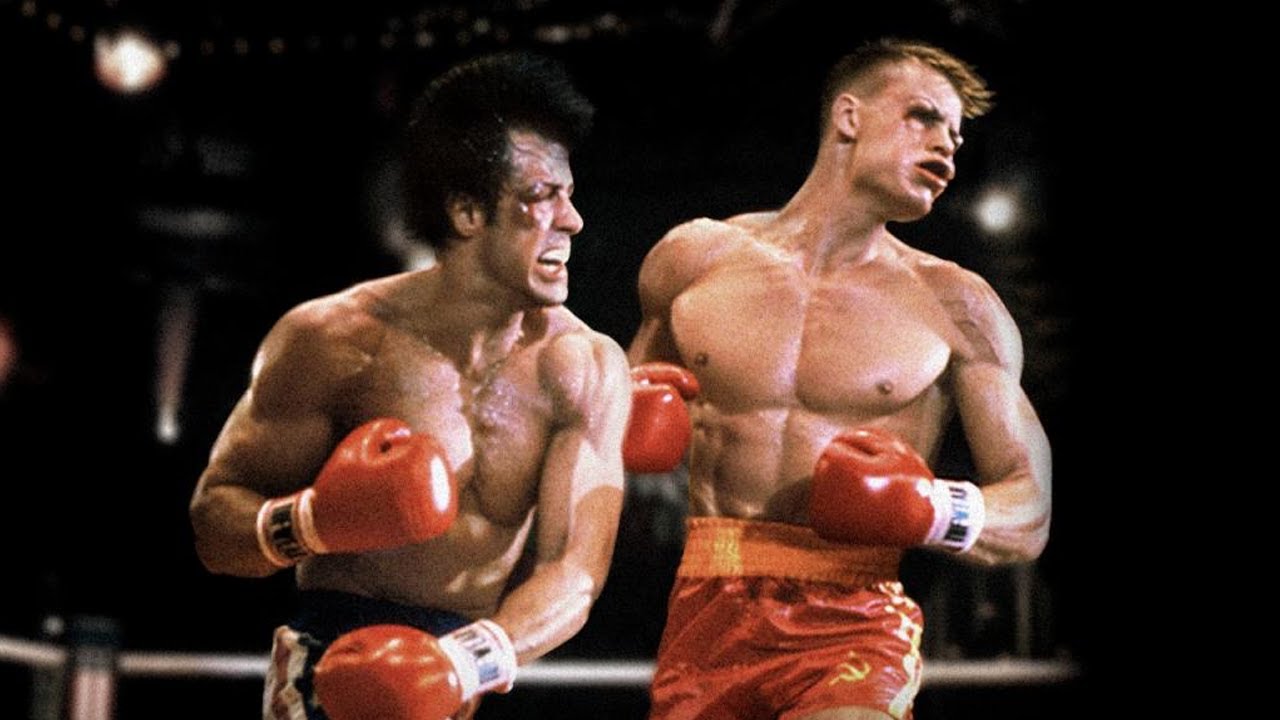 Welcome to Rocky Week here at Baller Mind Frame’s Pop Culture Spin! Over the course of this week (and next week), BMF Editor Sonny Giuliano and PCS Writer Dalton Baggett will be teaming up on a number of Rocky themed write-ups in anticipation and celebration of the Rocky spin-off Creed that was released on Thanksgiving Day. Today, Sonny and Dalton break down a hypothetical fight between Clubber Lang and Ivan Drago.

The year: 1989. Four years after Rocky Balboa defeated Ivan Drago in Russia. With Rocky forced into retirement, Apollo Creed dead, and Tommy Gunn non-existent (because, ya know, Rocky V never happens in this universe we’re exploring), the sport of boxing is facing a crisis. With seemingly no legitimate contenders for the heavyweight crown, promoters turn to two of the sports most controversial, and villainous competitors. Ivan Drago and Clubber Lang have agreed to boxing’s next super fight.

Today, Dalton and Sonny will each be backing a competitor, making a case for why their fighter would win in this hypothetical super-fight … a super-fight that should have been the subject of the fifth movie in the Rocky franchise.

Is it even necessary to have a “tale of the tape” here? We can assume that Drago beats Clubber in just about every statistical category, but that doesn’t mean anything to me. Do you know who else was an underdog against Ivan Drago? Rocky Balboa. Do you know who proved “He’s not a machine, he’s a man?” You guessed it, Rocky Balboa. The underdog always has a shot in the world of Rocky and that’s why Clubber wins this fight.

Let’s look at some facts that led to Rocky beating Drago and see if we can’t apply some of them to Clubber Lang. First, it took all of Rocky’s cumulative training over his entire life to beat Drago, but do you want to know what the most important thing he learned was? The Eye of the Tiger. That is single-handedly the biggest asset Rocky has in the fight against Drago. Clubber Lang just so happens to have the Eye of the Tiger as well. He wants to win no matter what.

Clubber is also still reeling from his embarrassing loss to Rocky Balboa, and we know from Rocky movie experience that fighting with a chip on your shoulder always leads to victory. Before you say that Drago got embarrassed as well, let me say that it likely impacted him in a different way. He didn’t develop a fire inside him to redeem himself in front of his country, but more likely got depressed and lost the will to train to be an elite fighter. He probably got exiled from Russia for shaming the nation. No state of the art training facilities to prepare him for Clubber Lang.

Let’s also not forget Clubber’s secret weapon, which I mentioned in a previous write-up: He grunts like a true champion. His training is gritty and filled with the man-cries of somebody who WILL NOT lose another fight. His battle call could rally any army to fight for him, and it instills fear in those who hear it. You might say that this is a bit of an exaggeration, but it’s not, so don’t.

I have one more very important point that needs to be made. Clubber Lang is the ONLY person on the planet who has ever beaten Rocky Balboa outright in a fight. Sure he tied Apollo Creed, and Dixon beat him by split-decision, but Clubber is the only man to have ever really kicked Rocky’s ass and won. This is saying something because Rocky just doesn’t lose. Granted, Rocky’s training was a little lax for that first fight, it doesn’t change the fact that Clubber won.

I’m sorry, Sonny, but my points are solid, and in this hypothetical fight of the century, I just don’t see a scenario where Clubber doesn’t come out on top. He’s got the drive to win, and he’s the statistical underdog. In the Rocky universe, these are just about all you need to succeed. I am, however, not so stubborn that I couldn’t be swayed from my thoughts on Clubber if you make a firm case for Drago. So please, do your best!

Dalton, I appreciate you for taking on the challenge of defending Clubber Lang in this fight. If neither one of us opted to pretend that Clubber Lang had even a puncher’s chance to win a fight versus Ivan Drago, well, then we have no column for today, and that’s a bad thing because we promised the people a Black Friday column about a hypothetical fight between two fictional boxing bad guys.

We can go one of two routes here, either of which leads to the inevitable result of Ivan Drago handily defeating Clubber Lang. We can go the realistic boxing route, or we can go the “how would a movie about this fight be written” route. Hell, you have some time, don’t ya? We can go down both routes.

So if we’re looking at this strictly from a boxing match perspective, Drago is the clear favorite. He’s younger and more agile … he’s bigger (Drago is listed at 6’5, Clubber is 6’1) and presumably has a tremendous reach advantage over his opponent … he’s superiorly trained and from what we saw on film, seemed to have more natural boxing skill than Clubber, who was a brawler that learned to fight in prison, an upbringing that isn’t nearly as prestigious as being an amateur champion in the then mighty Soviet Union, like Drago was.

And here’s the biggest thorn in the side for anybody who would be crazy enough to try to defend Clubber Lang in this debate: Rocky defeated Clubber Lang in Round 3 of their rematch, proving that he has no chin and no heart. Drago and Rocky went the distance, all while Drago’s country was turning their back on him. How in the world is he going to handle a puncher like Drago; a physical specimen that punches roughly 800 million times harder than the average human being (that’s an approximate figure).

Then we have the movie route, and this is the route I actually prefer to take. I like the view much better, and you should, too. So let’s assume, as the intro stated, it’s 1989 and the boxing powers-that-be have turned to Ivan Drago and Clubber Lang to fight for the vacant Heavyweight Championship. There are a few variables we have to consider:

First, are we sure that in 1989 Clubber Lang would be A) Alive, or B) Not in jail? He lost his fight to Rocky in 1982, arguably the height of the cocaine epidemic in America. In this alternate universe, isn’t it entirely possible that Clubber took all of the money he made from boxing and just bought all of the cocaine? Like all of it. Okay, maybe not all of it, but at least as much as however much money he had could buy. That’s quite a bit of cocaine.

Second, in this alternate universe, we have to assume that Rocky Balboa would be involved in some way. After all, this is a Stallone created universe and it’s hard to imagine that Rocky wouldn’t have involvement. How I envision it is Rocky sees firsthand how devastating it was for Drago to go from riches to rags in the Soviet Union, and he feels sympathy for him. Drago is called a murderer in America and a failure in the Soviet Union. He has nowhere to call home. His wife leaves him (possibly for Clubber Lang, for storyline sake) and Drago is left with nothing but a shack in Siberia and maybe a couple of cold and famished dogs. He’s the epitome of a broken man. Meanwhile, in Chicago, Clubber Lang just snorted his 18,732nd line of booger sugar, only he’s almost out of money.

Once the fight is proposed, it’s clear that Clubber is in because he needs a boost to his cocaine and prostitute funds. Drago is initially hesitant because he feels like the pressure of excelling as a boxer is what ruined his life. Just when it seems like the fight might be called off, Rocky flies to Russia to find Drago and offer to train him and build him into the best boxer in the world. He lets him know that he forgives him for killing Apollo and would even let Drago wear Apollo’s American Flag trunks if he fought Clubber Lang. Drago agrees, if only because Rocky makes him feel something that he’s never felt before … human. He feels like a human, guys, not a machine.

Rocky brings Drago to Philadelphia and trains him the old-fashioned America way. They do some heavy lifting, chase some chickens, do some one-armed push-ups, and run up the Rocky steps and rejoice together. Drago might be off the anabolic steroids now, but he has the eye of the tiger, and we all know that’s much more important when heading into a boxing match.

The fight goes just as you’d expect: Clubber comes out like a madman (probably because he’s all coked up), swinging like crazy, and Drago finds himself hurt early, but Rocky implores him to dig in. Drago goes on to impose his will on Clubber and he knocks him out in Round 4. After the fight Drago screams “I fight to win for me! For me … and Rocky!”

There’s no other conceivable way this fight goes down other than the way I just laid it out.