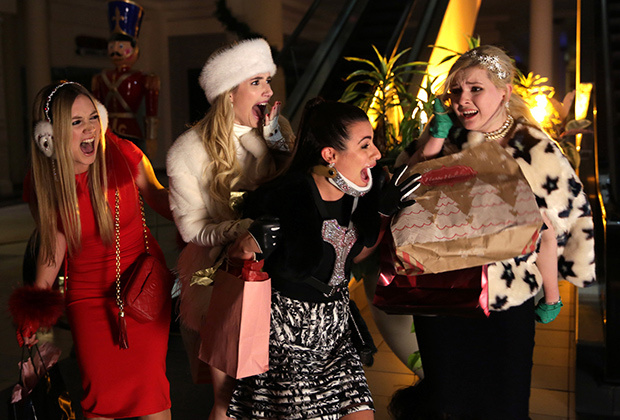 The week before finale episodes always means one thing: slow. That means I should have seen it coming when nothing of real note happened during Tuesday’s episode of Scream Queens.

I mean, sure, the Red Devil shoots Chanel with a crossbow – of course she has a furry sling – Grace gets kicked out of Kappa – way harsh of Zayday not to go with her – and Denise is revealed to be the new chief of police – I guess that’s sort of a step up? But no one DIED. There was no real intrigue, no mystery, no worry that someone’s life was actually at stake (except for that split second when I thought the writers were doing the unthinkable and killing Chanel off).

There was, however, lots of talk about murder this episode of Scream Queens, and surprisingly not from the Red Devil. The Kappas set out to murder Dean Munsch, who they’re sure is the Devil, while Chad puts a threat on Pete’s life. Haven’t they all been through enough? Haven’t enough people died needlessly? Why do they have to go around and throw more death into the mix?

And poor Dean Munsch! After she proves her Rasputin-like powers and survives multiple murder attempts, she realizes that the Kappas didn’t want to be friends and were instead trying to kill her. Even though the Dean is clearly a little bit of a psychopath, we’ve also seen that she kind of has feelings. She seemed so excited about their feminist club that her face when she figured out Chanel’s plan made me feel a little badly for her.

While I didn’t believe that the Dean would successfully be murdered, Chad’s throwaway comment about anyone who denies a Dickie Dollars duel will be killed had me a little concerned. It was a bit odd that they never touched back on that, but perhaps they have to save all of the major big deaths for next week. We’ll come back to this in a bit, though.

The biggest reveal during this week’s episode of Scream Queens was the motivation behind Gigi’s murderous scheme. It turns out that she wasn’t the Kappa to take the babies, her sister was. And when her sister couldn’t take it any longer and killed herself, Gigi decided to raise the babies as murderers to get revenge for her sister’s death. I’m glad to see that the writers actually gave her character a believable motive, as well as the fact that Wes and the Kappas found out the truth behind Gigi.

The other kind of reveal was that Pete is (probably) in cahoots with the Red Devils. Let’s look at the evidence: after Boone’s real death Pete is left all of Boone’s possessions, which he explains away with a half ass excuse. Next, he acts super shady about not wanting Grace to resort to murder, and is super sketch talking about how the Devil is “all the mess and filth of this place.” And finally, he tries to skip town due to his guilt about an unspecified event. Oh, yeah, and he tells Grace he’s a murderer.

Now, none of these things mean he’s the Devil or even working with them. It could just mean that he’s a separate murderer like Dean Munsch or Chanel Number One. It could be that the writers just want us to think he’s in line with the Devils. That could be true. However, it’s getting so close to the end that it’s likely just the simple answer: that he was working with Boone all along. I can’t remember which, but either my boyfriend or I called this the first episode. I hope it was me.

There were two things that I noticed this episode that should have been above the Scream Queens writers, the first being the blatant Galaxy Edge marketing, when Chanel gives one to each of the Chanels. The girls’ phones flashing with the colorful edge feature unique to the Edge was directly followed by a Samsung Galaxy commercial. I know I can be a little unobservant sometimes, but I hadn’t noticed any other blatant marketing in any previous episodes of Scream Queens. Even though I wasn’t all, “I can never watch another episode again!” I did interpret that as a little silly how they tried to squeeze it in there.

The other thing that was cringe worthy was the Scream Queens writing crew attempting to take on the “first time” issue. It seemed like it was just thrown in without real thought or build up. While I know it was supposed to bring on a big reveal, it ended up just being kind of awkward, and not in a good way.

No worries, though. Next week is another two-hour episode. Yay! It’s also sure to be bloody, because the producers of Scream Queens revealed long ago that only four would survive this season, and as of right now I count 11 main characters. This brings me to my earlier issue that they probably could have spared a few murders for this episode, but whatever. That means that next week’s finale will keep us on the edge of our seats the entire two hours. Can’t wait!