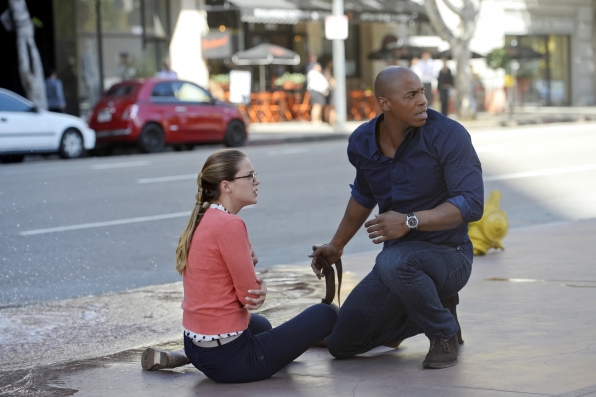 It usually takes a few episodes of the first season for a show to catch its stride, and Monday night’s episode finally did that for Supergirl. It was the best episode yet, and I hope it continues to set the tone for the rest of the series.

While last night’s episode didn’t stray too far from Supergirl’s usual monster-of-the-week style, it did finally touch back on those overarching stories that we thought the writers had maybe forgotten about.

After last week’s battle with the Red Tornado, Kara’s powers are drained and she’s living life as a human. So, of course, there’s no better time for an earthquake to hit, which is exactly what happens. Just as the earthquake hits, a DEO prisoner, Jemm, gets loose, which leaves Alex wondering whether she can trust Hank.

With the monster-of-the-week style that Supergirl has chosen to utilize it never really seems to be important what monster is chosen for that week. The monster is just there to advance the plot of the episode, and luckily the writers of Supergirl have plenty to choose from with years of comic book villains at their disposal. Jemm was an interesting adversary, yes. His psychic powers were a cool change of pace from the usual cut and dry alien villains. But what he was truly there for was to advance the plot between Alex and Hank in order to finally reveal Hank’s true identity.

And let me tell you, I was way off. In the comics, Hank is a villain called Cyborg Superman, but last night Hank revealed himself to be an alien shape shifter called J’onn J’onzz, who took over Hank’s identity and promised Alex’s father to look after her. This is super exciting for two reasons: 1. We no longer have to be suspicious of Hank, because in the comics J’onn is a hero better known as Martian Manhunter; and 2. This means that the writers of Supergirl are using characters from the comics as a framework, but changing them as they suit their needs. And that is awesome news because it means even the biggest fans of the comics still have a chance to be surprised every now and then.

Monday night’s episode of Supergirl was all about heroism, and how it can be found all around you, even in those that don’t have superpowers. James, Cat, and, Max (who I still don’t like, however) all have moments of heroism during last night’s episode, as does a temporarily human Kara.

I know that some people may argue with me when I say that Max wasn’t exactly a hero during last night’s episode. Yes, Max is a huge ass. Yes, his actions during the earthquake were inherently selfish. But he also made a good point when he said that having a superhero around to always do the saving can make people become complacent and dependent on a hero. Though his views may have been a little biased, they fell in line with Cat and Kara’s joint narrative of choosing to be a hero, particularly with the quote, “no, we can’t do what Supergirl does, but we choose who we want to be. We must choose to do what we can.”

Cat’s broadcast was not only another point on the list of why she’s so awesome, but it was also a great example of what is missing from the media. Instead of adding more messages of fear, Cat sees what the people need, a message that hope is not lost. That’s exactly what should be done in a time of crisis. And while some may consider it fluff, it’s important to emphasize the heroes, not the villains, during a disaster.

Luckily, by the end of the episode Capitol City has its superhero back. Though there was initially some doubt on Kara’s part after she finds out that it takes Superman 48 hours to recover his powers, Winn assures her that her powers will likely come back during a surge of adrenaline. Unfortunately for Winn, that moment happens to be when James’ life is threatened. Just as James is dangling from a wire Supergirl leaps up, her flight kicks back on, and she scoops him up before he falls to his death.

Winn already knows something is up after walking in on a particularly puke-worthy hug between Kara and James, and I’m sure that the “coincidence” of Kara’s powers coming back just in time to save James isn’t going to help the situation. We can only hope that James gets his shit figured out before Lucy senses there’s something more between him and Kara, especially since we found out he and Lucy are planning on moving in together.

While last night’s episode of Supergirl was great on its own, the return of Astra was an added bonus. It seemed like the writers had completely forgotten about her, and maybe that’s what they wanted us to think. But Astra is back, and she’s got Kara. So, next week’s episode is sure to be an interesting episode that breaks free of the typical monster-of-the-week set up to bring us more answers and twists.