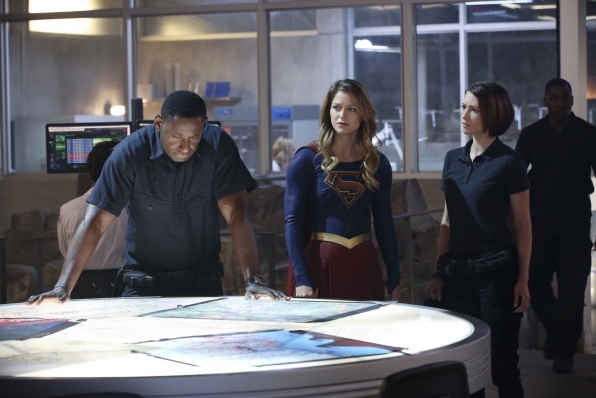 Okay, so I know I said last week’s episode of Supergirl was the best one yet, but this week proved me wrong. Seeing as this week was the fall finale, I guess this was to be expected, though.

Monday night’s episode of Supergirl picked off right after last week’s with the much overdue appearance of Astra. While it may have initially seemed odd that they would introduce a character that was exclusive to the TV show, only to have her disappear before things got good, the pace was actually well thought out. We had just enough time to get to know the characters, as well as build backstory, so that we were properly invested in the storyline once the show finally got around to it.

Of course, there was more story building this episode when we learned exactly how close Astra and Kara had been – Astra had thought of Kara as a daughter. That, along with the empathy we were allowed to develop for Supergirl during the stretch of weeks, was what made this week’s revelation all the more emotional. After being led to believe that Astra had always been the bad seed, things were revealed to be a little more nuanced than that as Astra had made a radical attempt to save Krypton from its demise, while Alura used Kara and Astra’s relationship to trap Astra and sentence her to Fort Rozz for her efforts.

Melissa Benoist’s performance, while always amazing, was absolutely incredible this week. Her confrontation with her holographic mother gave me chills, and her interactions with Astra were just as heartbreaking.

While it’s clear that Astra doesn’t have bad intentions, just bad approaches, and that, like Kara, she’s hesitant to kill the girl she once cared about, it’s also obvious that we can’t trust her. We still have no idea how truthful her accusation about Alura is, especially after Cat’s valid point that sometimes parents do hurtful things for the sake of giving their child a better life.

Apparently things move slowly in Capitol City, because when Kara wasn’t flying around kicking alien butt, she spent the rest of her never-ending day at Cat Co. The other storyline of the week revolved around Cat’s email being hacked by an insider. The sleuthing that they needed to pin it on Dirk Armstrong naturally required some superpowered assistance. In the end, Kara’s slip that she had “overheard” something was the tip off for Cat to FINALLY recognize Kara as Supergirl. You know, not the countless times that Kara stood right beside one of the TVs in Cat’s office plastered with Supergirl’s face.

Needless to say, Cat’s revelation was way overdue, because while James’ explanation as to why people are incapable of believing someone they know as a superhero was the most reasonable explanation I’ve heard, it was starting to become unbelievable that someone as smart as Cat hadn’t figured it out yet. Also, it was pretty satisfying to see Cat figure it out before Maxwell Lord. Hopefully now that she’s on the same page as James and Winn, that means that Cat will be invited to their little sidekick club. Or even better, maybe she’ll get to join Kara in a supersuit.

While Cat’s discovery was the most notable thing to come of this part of the story, another notable meeting occurred between Cat and Lucy Lane . I didn’t know that I had been waiting for Cat to come face-to-face with her arch nemesis’ little sister, but apparently I was. The throwaway scene where Cat told Lucy that she “got the looks” was one of my favorite lines of the episode.

Of course the most cliffhanger-y episode of the season just had to be the final episode for awhile. Not only do we have to wait to see what comes of Cat’s revelation, as well as the epic battle between Non and Supergirl, but we also have to wait until January to find out if Winn takes James’ advice to finally pursue his feelings for Kara.

After Kara and James spend way too long flirting and subsequently trying to convince themselves in addition to Winn and Lucy that they’re just friends, James finally takes this moment to step down. Good for him. He chose Lucy, and he needs to let Winn have his shot now. While it remains possible that Kara doesn’t see Winn that way, as he’s way deep in the friendzone, I have hope that Kara will realize how adorable he is. I mean, even Cat thinks he’s cute, she called him a “handsome little hobbit.” Yeah, the word hobbit is in there, but so is handsome. Come on, Kara, just give him a chance already!

Like I said, I totally knew things were only uphill from here on out for Supergirl, so we are sure to expect more exciting things coming our way next year. I’m already counting down the days.