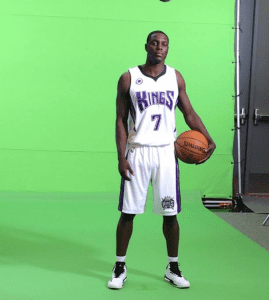 “We don’t win without Darren Collison,” Kings coach George Karl said after their narrow victory in Indiana. “It was a team effort in a lot of ways, but Darren Collison was special. I know he played (with Indiana). Sometimes coming back to places (motivates you).”

Thriving under Karl’s uptempo style of play and full control over the offense, Collision finished tonight with a season-high 24 points. Ultimately, sinking the three-pointer to move the Kings ahead by four in the final three minutes of the contest.

The Kings were well equipped to win the game, as they held the Pacers completely scoreless in the last two minutes of play to seal victory 108-106.

Sacramento is now heading home after splitting their road trip record to 2-2. This was a much-needed win for Sacramento as they are now tied for the ninth seed in the Western Conference. Just one game back from playoff contention, the Kings are abundantly aware of where they stand in relation to conference competitors.

“Everyday, we come into the locker room and right there on the board is the standings of the Western Conference,” says Collison. “We want to make the playoffs, that’s our whole goal this year, nothing else.”

The Kings were off to a hot start tonight behind their other point guard Rajon Rondo. Rondo had this dazzling dish below on his way to nine first-quarter assists. Just two rebounds shy of his fifth triple-double, Rondo finished the game with 16 assists and 13 points.

The first half was all Sacramento, as the Kings totaled 64 first quarter points. Omri Casspi has continually played great basketball starting in place of the injured rookie, Willie Cauley-Stein. Tonight, Casspi had his third consecutive double-double with 15 points and 11 rebounds and is shooting 50 percent from the field and 45 percent from three-pointers this season.

But what kind of Sacramento Kings game would it be if the other team didn’t come back?

Indiana came out of the half and outscored the Kings by 13 in the third quarter. Cutting the deficit to two points, Paul George, George Hill, and Monta Ellis combined to score 26 of Indiana’s 33 points.

Paul George struggled from the field for his second consecutive night, shooting 26 percent from the floor and missing the potential game-tying shot as time expired. As for George Hill and Monta Ellis, they went on to score 20 and 21 points respectively.

The Pacers slowly battled their way back into the game and eventually took a one-point lead on a three-pointer from Monta Ellis with two minutes remaining in the game. The Kings, however, did not quiver one bit.

Rudy Gay and DeMarcus Cousins came up the final four points of the game and sealed the victory for Sacramento.

Cousins lead all players with 25 points and 16 rebounds. Rudy Gay finished the night with 19 points.

The Kings head home to take on the Portland Trailblazers next. Facing a statistically worse team, this game will be a challenge for Sacramento who have frequently undervalued their opponents.