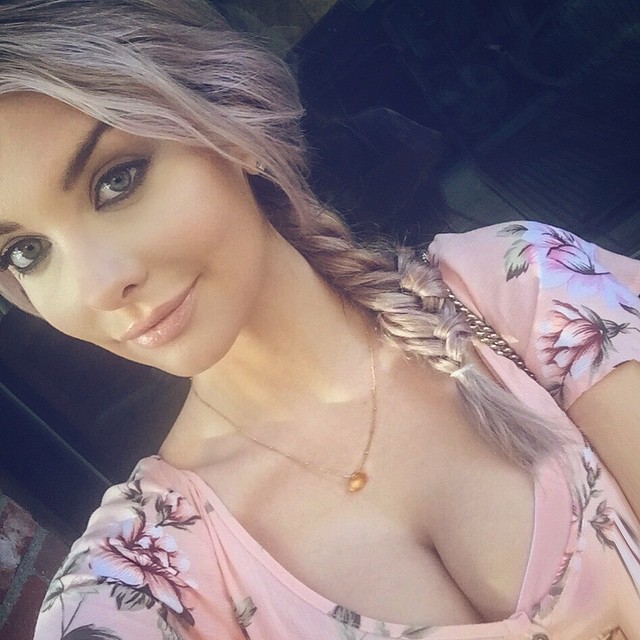 I was recently able to interview model Emily Sears on behalf of Pop Culture Spin. As her official website states, Emily has been shown in titles such as GQ USA, FHM, Maxim, and more. My inquiry to her was on the basis of having a Q&A about the pros and cons that come with a big social media platform. Emily has close to 32,000 Twitter followers and over two million on Instagram at the time of this writing, making her a popular source of internet attention.

Pop Culture Spin: Just for a little background on yourself before I get into the more serious questions, what made you want to get into modeling and how have you made a successful career out of it?
Emily: My great Aunt was Australian model of the year in 1956, she was discovered by Helmut Newton, and moved to Los Angeles. Also, my parents were art publishers so I grew up surrounded by photography and art depicting women. I remember wanting to just see one little picture of myself in a magazine, I was fortunate that my first shoot was sold as two covers of magazines in Australia, I also received a contract to one of them and that’s how it began. In the last few years I have branched away from glamour modeling and been focused on more commercial opportunities.

PCS: Many people assume everything it glitz and glamour in the modeling world, but what are some of the difficulties in your profession that most people don’t realize?
Emily: The obvious answer I guess is the pressure and scrutiny you face towards your physical body. It can be quite emotionally scarring to have your body picked apart and ridiculed. Furthermore, we live in a society that loves to shame women, so with my provocative body of work comes assumptions towards my morals and character. People have a hard time separating an image from the reality of who a person is. Society in general doesn’t support female sexuality other than to service heterosexual male sexuality, and expressing myself freely has come with sickening backlash at times from both men and women. The reactions have been quite extreme especially given that I haven’t posed nude. Many believe I am undeserving of success or of independently earning an income based upon my physical body. Maybe they are right, I don’t know! I didn’t plan to be in the position I am in, I didn’t ever believe it would get this far but here I am and I’m just trying to make the best of it while it lasts.

PCS: You obviously have a big social media following, particularly on Instagram. What are some of the pros and cons that come with being this established?
Emily: As I mentioned, the cons would definitely be that I am exposed to countless derogatory messages from strangers. As much as you can try and ignore it, there’s no measure to the long term effects of being exposed to this volume of verbal abuse. I receive minimum 100 slurs per week, so on some level I assume that affects my inner well being. Also another con of having social media be a huge part of my income is that I never quite feel that I can switch off and turn off my phone. It gives me the freedom to work from anywhere, however wherever that freedom brings me I will have my phone in hand. I try to make a point of making time to catch up with friends without taking any photos. Often it’s disappointing when people try and push products and posts upon you, there’s definitely many who reach out for a favour but I think more and more nowadays people are starting to realize that this is definitely work and requires a lot of effort and discipline to maintain.

In my opinion the greatest pro that social media has given me, and given other women is the opportunity to engage my own audience and to prove to the industry that there is an audience for models of all body types. It’s refreshing to start seeing online boutiques choosing curvier women, to see the breakdown of an industry that has previously only given curvy models very provocative opportunities, it’s refreshing to see hard working fitness models get the recognition they deserve both as athletes and inspiring people in living healthy lives, it’s refreshing to see hard working stylists and makeup artists and fashion bloggers have control of their platforms and to be compensated and recognized. It’s refreshing to see more women of colour have a space where they can build a following and be recognized. The greatest pro of IG is that the people are in control of what is made popular, not a small clique of people behind casting or publication desks. It is an exciting time for creatives to flourish.

PCS: People say things on social media that they would likely never say in real life. It seems we’ve fallen into an “anything goes” territory without any sort of reasonable line of separation… What do you think this says about people’s relationship with social media?
Emily: I think this speaks to a bigger issue of disconnect in society. It’s indicative of the state of our culture. People love to blame social media and reality TV, but there is a disconnect in homes, there is a lack of resources for youth, there is a lack of consideration and empathy towards people suffering from prescription addictions, from homelessness, from PTSD, from domestic violence, from systematic racism. These things are all entangled and interweaved. If you find disturbing things expressed on social media, I think it’s unfair to blame social media. IG is the modern day community pin board, amplified. By definition social media is the public bulletin board of society. This is what’s going on. Black lives matter, bullying and harassment is real, eating disorders are real. Shaming, victim blaming and rape culture are real. Anything goes is commentary, because anything goes in our society. There’s real suffering and people are disenfranchised. People are frustrated. Social media is an outlet for everything, you have to take a look at the source and the source is the people and their struggles and their place in society. The expectations and pressures upon them, their disappointment in a lack of support or consideration. This is reflected in people’s motives to unleash anonymous abuse to others.

PCS: Do you find yourself biting your tongue when people say nasty comments on Twitter, Instagram, and other platforms, or are you able to easily brush them off?
Emily: It depends on my mood, I’m Australian, I was raised to stand up for myself that is in my blood. Sometimes I feel more frustrated by people telling me how I should react to my own attacks. It can be just as suffocating to be told I shouldn’t defend myself as it is suffocating to receive misguided anger based upon a photo of my physical body. I can say that the “not all men” line gets tiresome. Yes, not all men are sexual harassers, but “yes all women” experience sexual harassment in their lifetime. How they respond should be listened to rather than silenced.

PCS: I asked the previous question because some people believe responding to haters is the equivalent of feeding the beast. The problem is if no one tells these people how ignorant they are, they won’t change, but at the same time, they don’t listen to outside logic. So is it possible for this problem to be solved or is it truly a lost cause?
Emily: I’ve elaborated on this as much as possible in my previous answer, I will just reiterate that there is no right or wrong way to be a human being and defend yourself, I think it is down to the individual to decide what response is best for their own sanity. For me it changes on the day to day mood.

PCS: What would your advice be to up and coming models about the negatives that come with having an internet platform?
Emily: I’m not sure I am qualified to give advice on this because I’m not sure that I have mastered the art of dealing with it myself. I want to make it clear that I am not complaining on my position. As much as I receive abuse I also receive a lot of support and a lot of praise for what I do, so I try to focus upon that. Just stay true to who you are.

PCS: Have you had conversations with other models or celebrities about the darker side of social media, and if so, what have their experiences been like?
Emily: We all go through similar things, it can be scary. I wouldn’t divulge what others have confided in me which other than to say on some level we all deal with it, the self doubt, the safety concerns, the confusion, all of it.

PCS: In fairness to your followers, I’m sure you have numerous loyal fans and positive influences floating around on the web. What is your message to those who use social media appropriately and don’t cross any harmful lines?
Emily: Keep engaging! It is appreciated, if you like a picture say so, the positive response means a lot, I can see things like people saying they want more of a certain type of post such as girls asking for makeup and outfit posts or fitness posts and I will make a point to deliver that.

PCS: I want to thank you for the interview. Social media can be an excellent resource for information and staying connected, but I’ve noticed a definite trend of negativity, especially when it comes to how people hide behind their keyboards by bashing celebrities and unleashing hateful rants. This isn’t the most fun topic to discuss, however, I appreciate you setting aside time to shed some light in this important discussion. And I believe it’s necessary to separate the good social media users from the bad ones. Any closing thoughts?
Emily: Nothing much more to add other than to say follow me! IG: @emilysears, Twitter: @tweetemilysears, Snapchat: EMILYSEARSAUS and Facebook: /ilikeemilysears.

As you can learn through my interview with Emily, she seems to have a good perspective on the desirable and harmful aspects of social media. During one moment, Emily can be praised for her modeling work and benefit from her online presence. The next, she can be subjected to hateful comments and be a major lashing out target for critics. For her and other established models, a balancing act between the pros and cons of having a large internet platform seems necessary. This method is something all of us presently active on social media should keep in mind when engaging. Emily is often followed for her pictures, but her voice is equally if not more powerful.