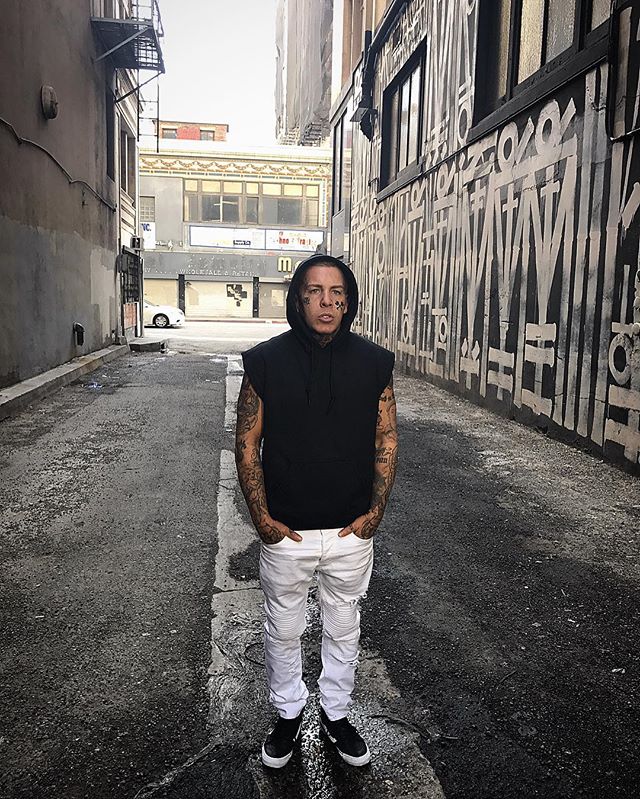 Madchild is an underground rap legend for a variety of reasons. From his unique sound to his impressive longevity, no one can question his place among the greats in the hip-hop world. It was an honor to have the opportunity to interview Madchild, an artist who I have been a fan of for years. We discussed his upcoming album The Darkest Hour, working with Evidence exclusively as the producer of the project, and how he’s maintained success in the rap world for such a lengthy period.

When I asked Madchild about The Darkest Hour which drops July 28th, he mentioned the tremendous fit that he had with the “extremely talented” producer Evidence. They had a high “success rate” when it came to pumping out songs, and with that in mind, the entire 14-track album has Evidence’s fingerprints all over it.

Considering Madchild’s success with Prevail in their group Swollen Members, I was curious how he transitioned into his solo work. He discussed Dope Sick (his 2012 solo album) as being a “new start” since those tracks “definitely revolved around coming off a bad opiate addiction.” Dope Sick “hit home to fans” in his mind because of its authenticity. Given the content it presented, I would imagine countless people found solace in the project.

Following that 2012 release, Madchild continued his run with Lawn Mower Man and Silver Tongue Devil. We spoke about how all of his solo works remained consistent without there being a major creative drop off. Madchild stated that “each album is its own body of work” and “as a solo artist I have the freedom to be bold.” He acknowledged that there’s a “different synergy” between group projects versus individual ones even though there’s also many similarities. With his unforgettable imagery created through lyricism, bold is certainly a word that captures this artist.

On the notion of those in the music industry initially finding success before losing themselves creatively or abandoning their true sound, Madchild mentioned that “I promised myself that wouldn’t happen to me.” This rings true when listening to each album as a whole – there’s an undeniable level of artistry that steadily operates through each track. Working with Evidence who is “very particular” about what goes into making quality music means that fans can expect the same success to be found on The Darkest Hour.

There will also be several exciting features for fans to hear. Madchild stated that he “wanted Alchemist” which thankfully ended up happening and he sounded confident in the material that every featured artist put forward. Another point of excitement for followers is the trend of “Madchild Mondays” – a clever idea in which he releases consistent Monday content to keep people engaged. Since he was “kind of radio silent last year,” committing to forwarding regular content between albums seems like an undeniably smart decision.

“BadChild” provides assurance that this new album will continue the trend of visually popping imagery and unique lyrics. I’ve always respected the work behind Madchild’s music videos. “Runaway” from back in the day is an all-time classic, something I mentioned to him when we spoke, and “BadChild” proves that he has plenty of gems left. He’s also “shooting out to India for Black and White” in the near future. “Black and White” is one of the 14 songs you can expect to hear when the album drops in July.

The status of a gem can also be attributed to “Write It Down” which achieves the highest possible degree of success when it comes to the production value of a music video. Madchild referred to his fans as great because of “their loyalty, they’re ride or die” – that type of loyalty is rewarded every time an outstanding video such as this is released. Part of why this artist’s fans have remained close to him is because they know his commitment to quality music is unwavering.

I also asked Madchild about his drive given the amount of time he’s been rapping. He talked about the “five years” he spent out of the game due to his drug addiction and stated “why should I stop doing what I love” – a completely fair and sensible point. Given his current rhythm in the music world, there’s no reason for Madchild to stop. He’s phenomenal at what he does and has built a legion of loyal followers. There’s also the lifestyle dynamic that he enjoys as heard when he told me “I feel more comfortable in my hotel room than in my home.”

As of now, Madchild lives in Los Angeles, California but pointed out that “Vancouver was the 1st city to get behind Swollen Members.” The California sunshine has treated Madchild well by his estimation, and fans from all areas can be excited by the fact that he tends to tour in a range of locations. Madchild blew up in Canada and it’s awesome to see his presence continuing to grow in the states. For my Bay Area readers, Madchild will be performing in Oakland, California on the night that his album releases. Stay tuned for additional details.

Overall, having the chance to interview Madchild was an unforgettable experience. This is an individual who I have been listening to since I was a teenager. As an underground fixture, Madchild arguably has no equal. I say this because he’s a rarity in multiple areas – his look, voice, rhyming style, and lyrical abilities are all supremely unique. He’s a true original in every sense of the word.

For those interested in copping The Darkest Hour, you can preorder it here. I will conduct an album review of the project once I listen to it. The excitement level for July 28th should be through the roof given how excellent “BadChild,” “Write it Down,” and others have sounded. Buying Madchild’s album and supporting his career would be a wise decision moving forward. I was a huge fan of Madchild before our interview – my appreciation of his music and respect for his individuality has only grown since our conversation.