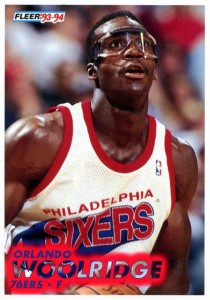 Every once in a while, I’ll look through my childhood collection of obscure, essentially worthless basketball cards and think to myself, “Why did I waste so much money on these stupid pieces of cardboard?” Anyways, the other day I happened to stumble across one in particular that caught my eye. It was an old card of the late Orlando Woolridge as a 76er, wearing a nerdy pair of oversized goggles that probably would have covered Muggsy Bogues’ entire face. I looked at the card puzzled and said, “When the hell was Orlando Woolridge a Sixer?”

For those who don’t know, Woolridge was an athletic freak of nature and alley-oop originator who famously threw down the first between the legs dunk in the history of the Slam Dunk Contest. Although he never became a household name, Orlando went on to live every kid’s NBA dream; rocking rims with Michael Jordan in Chicago, running “show time” with Magic Johnson as a Laker and posting four seasons of over twenty points per game (including a career best 25.1 ppg as a Denver Nugget in 1991).

Unbeknownst to me, he actually ended his career in Philly. In 1993, Woolridge would play the pivotal “sixth-man” role on a lackluster Sixers team that, despite their 25-57 record, had one of the more interesting lineups in league history. Their leading scorer (18.4 ppg) and rebounder (10.1 rpg) that year was Clarence “Baby Barkley” Weatherspoon, the undersized, slightly overweight, and surprisingly athletic low post bruiser best remembered for finishing 2nd in the Slam Dunk Contest to Harold “Baby Jordan” Miner of the Miami Heat as a rookie. Dana Barros, an All-Star and the NBA’s Most Improved Player in 1995, ran the point. Their shooting guards were the two highest scoring Jeff’s in the league: Hornacek and Malone. At center was none other than 7’6 Shawn Bradley, the former BYU standout known internationally for getting jammed on (although he was a lot better than credited) and for his short cameo in Space Jam. Finally, off the bench was the Hall of Famer, Moses Malone, who at 38 had close to nothing left in the tank, and for four games, the 7’7 gentle giant, Manute Bol, who was signed towards the end of the season to serve as a mentor for the young Shawn Bradley.

Back to the point. Being at the tail end of his career, Woolridge wasn’t really expected to do too much in Philly. Two days after he was signed, the Philadelphia Daily News published an article titled, “Sixers Hope ‘O’ Isn’t a Big Zero”, further asking the question, how much does Orlando Woolridge have to offer? He was 34. He had only averaged 4.3 points and 1.3 rebounds in the preseason, and for a guy who relied so heavily on athleticism, it wasn’t unreasonable to doubt how much more leaping and dunking his body could handle. Then Sixers coach, Fred Carter, said of Woolridge’s signing, “I was an assistant in Chicago when he started his career there, so I knew who he was, what he could do. I just didn’t know whether his skills were still at the same high level.”

Well, as it turned out, Orlando still had a little bounce left in those old knees. As the second oldest player on the team, Woolridge went on to average 12.7 points, four rebounds, and two assists in 26 minutes off the bench. Sure, his scoring numbers were far off from the 25.1 he poured in four years before, but hey, when you’re in your mid-thirties, double-digit averages and a fat NBA paycheck ain’t too shabby. On April 24th 1994, Woolridge would suit up in an NBA uniform for the last time, scoring 24 points (11-17 FG) in 29 minutes in the Sixers 110-102 victory over the Detroit Pistons in the season finale. He’d say goodbye to the NBA after that, ultimately, ending up in Italy where he won the European Cup under current Sixers assistant, Mike D’Antoni, and then in Hollywood as the head coach for the WNBA’s Los Angeles Sparks.

Although his lone season in Philly probably won’t be remembered by many, hidden deep in YouTube’s archives, I found a 20 second clip of Orlando Woolridge throwing down some nasty jams as a Sixer. Enjoy everyone. Just like his life, the video ends way too soon. RIP.