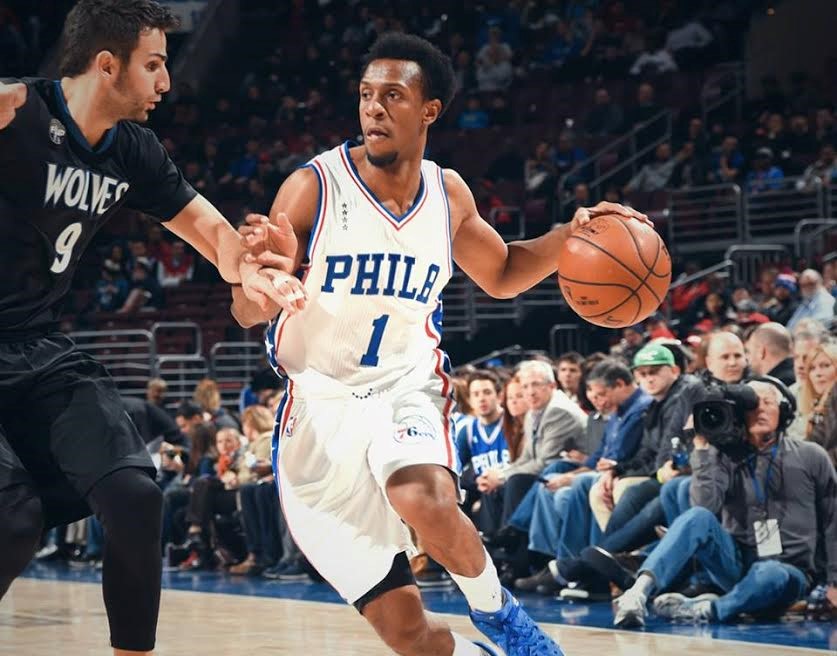 After soaring through the air for a put back slam midway through the 4th, Richaun Holmes ran back on defense in total jubilation; screaming and pounding his chest as Sixers fans rose in ovation. If you had captured just that moment, you would have thought the 76ers had won a championship. And although it might just be another regular season win, in a year where wins are few and far in between, every victory feels like Game 7 of the NBA Finals.

Coming off of their six game road trip, the Sixers were back home Monday night to take on Karl Anthony Town’s and the Minnesota Timberwolves. Strong ball movement was an early focal point for the Sixers, who registered a season high 10 first quarter assists, which resulted in 29 points on 60.9% (14-23 FG) shooting in the opening period. With Town’s in foul trouble, the Sixers took advantage in the post with big first half performances from Holmes and Nerlens Noel who sank eight of their nine shots for a combined 17 points. Despite this, the Philly trailed 50-47 at the break thanks to 30 points from Minnesota’s second unit and a perfect shooting display from Shabazz Muhammad who led all scorers at halftime with 10 points (4-4 FG) off the bench. As for Towns, the first overall pick in the 2015 NBA Draft, and Jahlil Oakfor, the third, neither of the young superstars were able to get into much a groove. Hindered by foul trouble, Towns played nine minutes in the first half, contributing only two points and two rebounds. Okafor, in his return to the starting lineup, looked passive and was unable to take advantage of the smaller Gorgui Dieng, finishing with only two points as well.

In the second half, Okafor’s aggression intensified as the Sixers offense began to catch fire. Minutes into the 3rd quarter, Okafor went on the attack and barreled his way through Towns, scoring six straight points in a little over a minute as Philly regained the lead. In the process, Jahlil was able to draw two quick fouls on young Karl-Anthony, who was sent back to the bench immediately in exchange for Dieng. With the Sixers trailing 89-88 late in the 4th, Philadelphia received huge bench contributions from the energetic Holmes and the veteran savvy, Carl Landry, who alongside Ish Smith, lead the 76ers on a 14-4 run as they took an 11 point lead and coasted 109-99 for their fourth victory of the season. Smith, who combined for only 13 points on 5-28 (17.9%) shooting in his last two games, badly outplayed Ricky Rubio down the stretch and finished with a team high 21 points (9-16 FG) and 11 assists. The always energetic Holmes added a big 17 points (7-10 FG) in 17 minutes, while the 32 year old Carl Landry contributed 16 points (8-11), spearheading a magnificent overall performance from the Sixers second unit that outscored the starters 61-48.

Containing Wiggins/Towns
After exploding for 17 points (32 total) in the 4th quarter during their first meeting last month, the Sixers were able to rely on an outstanding defensive effort from JaKarr Sampson and Jerami Grant who were able to limit Wiggins to 16 points (4-9 FG), three rebounds and three turnovers. The key to their success was to keep him out of the lane and force him to take shots from the perimeter, a task much easier said than done. For the season, Wiggins, the 2015 NBA Rookie of the Year, is averaging a team-high 20.4 points, but has struggled with his shot, knocking down only 23.5% of his attempts from three. As for Karl-Anthony Towns, truthfully, for the most part, he was able to contain himself Monday night. Stuck in foul trouble all game, the 20 year old rookie was limited to just eight points (4-8 FG) and six rebounds in 24 minutes. With Towns on the bench, the Sixers attacked the paint, resulting in 53 points from Philly’s frontcourt. The 76ers also took advantage on the board, out-rebounding the Timberwolves 37-27.

The Old Bull Teaching the Young Calf
Just hours before tipoff, the Sixers announced that Elton Brand would be coming out of retirement to rejoin the Sixers for his second stint in Philly. Similar to the role Kevin Garnett is playing in Minnesota, Brand, a 2x NBA All-Star and the 2000 Co-Rookie of the Year, will be looked upon to provide leadership in the Sixers locker room and to take Jahlil Okafor under his wing the same way Garnett has done with Towns. To the older generation of basketball fans, it seems like only yesterday that Brand was at the top of the NBA as one of the most dominant power forwards in the league. Ten years ago, during the 2005-06 season, a 26 year old Brand finished seventh overall in the MVP race after averaging 24.7 points (career high), 10.0 rebounds, 2.5 blocks and leading the Los Angeles Clippers (47-35) to the second round of the playoffs for the first time in team history.

Game Notes
• Jahlil Okafor did not play in the 4th quarter.
• The Sixers shot a season high 55.2% from the field and registered a season best 31 assists.
• The Timberwolves, who rank last in the NBA with 15.3 three-point attempts per game, attempted only five against the Sixers, converting on two.
• Minnesota’s Shabazz Muhammad scored a season high 20 points (8-11 FG) off the bench. For the season, Muhammad is averaging 8.7 points, down from his 13.5 average in 2014-15.
• Things got feisty in the 3rd quarter when JaKarr Sampson gave Kevin Garnett a two handed shove to the chest after the two had gotten tangled up under the basket. Sampson was given a technical, while the “innocent” Garnett was not penalized.
• The Sixers will continue their home stand against the Atlanta Hawks on Thursday at 7:00 PM.