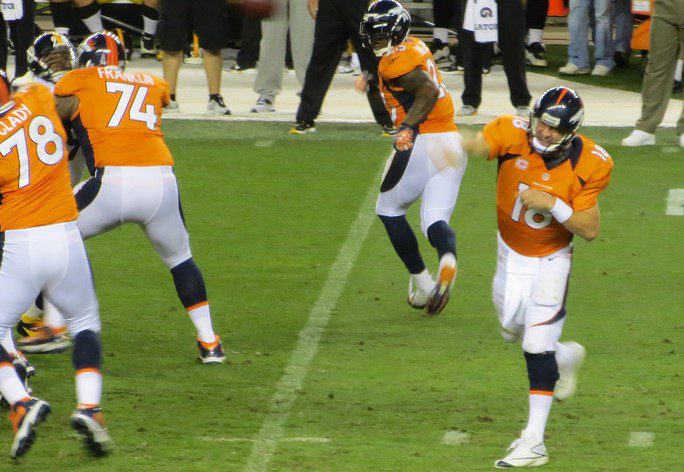 Peyton Manning could be heading for a proverbial last ride during the upcoming NFL playoffs. With Gary Kubiak deciding the Denver Broncos are going with Manning as the team’s starting quarterback over Brock Osweiler, fans could realistically be watching the legendary slinger for the last time. Whenever he goes away, whether it’s a prolific ride into the sunset or a forgettable flop of mediocrity, Manning’s journey has been mesmerizing as an NFL icon. Skeptics point to the lone Super Bowl win and the countless first-round playoff losses, backers look to the statistically remarkable numbers and impressive staying power. Followers on both sides of the Manning spectrum, regardless of how committed they are to their stances, should each find watching the QB’s performance to be fascinating.

The inescapable reality is that Manning has been a horrible QB this season. In his ten games, he totaled just nine touchdowns against 17 interceptions and had a sub-60 completion percentage for the first time since his rookie year. Injuries, HGH claims, and the emergence of Osweiler dominated the QB dynamic and the media spotlight for Denver. Beneath the surface, a legend stood on the sidelines, and despite the greatness he’s reached as an athlete, it seemed possible that he would never start another game. Reports of who Denver was behind have been constant and frequent in their changes. Manning or Osweiler? The mentor or the apprentice? Old wisdom or new talent?

It appeared Osweiler had the edge. He’d been the starter the last few games of the regular season, and Manning didn’t exactly put up stats that instilled confidence. Once Denver’s regular season officially ended and a bye week was ensured, the football world wondered who Kubiak would go with. Even as a non major supporter of Manning and someone who isn’t a Denver fan, I was hopeful Manning would be the selection. How could I root for anyone else? Dating back to my childhood days, Peyton Manning has been one of the most watchable and stellar professional athletes in the world. Backing Papa John isn’t something I can stand behind, but I have immense respect for the career Manning has given football fans.

Acknowledging Manning’s time nearing its end is to realize a rare master is soon to leave us. I doubt many NFL players have been smarter or more knowledgeable about how to slice up defenses than Manning. His brain remains sharp as his physical skills have decimated, and this twilight period is what will make Manning and Denver incredibly fascinating to follow. With the team’s defensive group and a bye week, the Broncos could realistically win a Super Bowl. How strange would it be for Manning, the classic “great but not clutch” QB in the eyes of many (whether that’s fair or foul is a different article entirely) to win his second Super Bowl in the worst season of his storied career.

I don’t see Manning caring all that much about this possible subplot. If he wins a Super Bowl, game manager and shadow of his former self and all, it will be a truly special moment. Perhaps rediscovered success will make Manning want to return for another year, an equally plausible situation could be a dismal playoff showing motivating Manning to come back. As the theme of this article has gone, no matter how Manning performs and what happens to Denver, fans shouldn’t look away. The biggest question mark of the NFL playoffs will be how Manning plays.

Something tells me the old legend still has a few tricks remaining in his bag. Injuries gave him rest and time to recuperate from his struggles. Can a mortal man run away from the inevitability of time and the irreversible strains that accompany it? Naturally, no. But a brilliant mind with enough skills left in his right arm to remain on an NFL roster could push time away for just one more play, one more game, one more Super Bowl push. As a fan of the sport with my favorite team not appearing in the playoffs, put me in the camp of rooting for Manning. Our eyes will tell the story because what they see will be indicative of Manning’s play – he’ll either remind us of the master he’s been since 1998, or he’ll make us realize that he no longer is. This could be Peyton Manning’s last ride. Let’s all be grateful to be part of the trip.