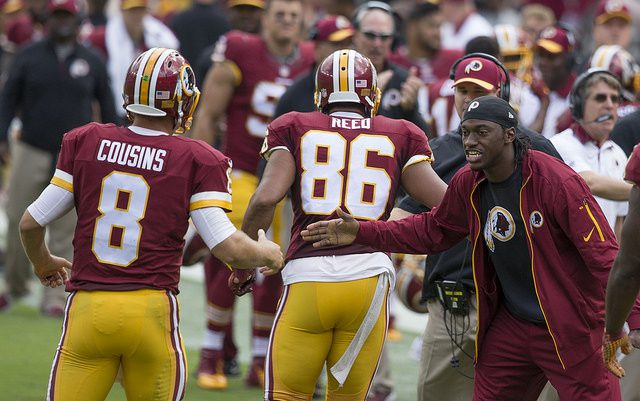 If you haven’t noticed, I didn’t make any NFL picks over the last two weeks of the 2015 season. None. Not here. Not on Facebook. Not on Twitter. Not on Instagram. Not on AIM. Nowhere. And before you chalk that up as laziness (O.K., it was partly due to laziness), allow me to explain the method to my madness.

Last year I went 10-1 picking NFL games during the Playoffs, and if Pete Carroll decided to hand the ball off to Marshawn Lynch with the time ticking away in Super Bowl XLIX, I would have not only went 11-0 in my playoff picks, I would have also nailed a five entry parlay that included Seattle winning, Lynch being named Super Bowl MVP, Blue Gatorade being dumped on the winning coach, Katy Perry’s opening song being ‘Roar’ and Katy Perry’s closing song being ‘Fireworks’. In some circles, that’s referred to as the greatest five-line parlay ever.

Ever since things didn’t go my way in Super Bowl XLIX, I’ve been in a funk trying to figure out what the hell to expect from the National Football League. Picking games was more difficult and more of a grind than it had been any season prior, and by Thanksgiving I felt like an NFL team that knew they had clinched a Playoff spot … I was just ready to pack it in and get back into it when the games really mattered. So, for better or worse, that’s exactly what I did.

Now that the Playoffs have arrived I’m ready to get back to my winning ways. More importantly, I’m ready to write about football again.

With that said … what the fuck am I walking into with these Wild Card games? Is it just me, or do all four of these games feel weird. All four road teams are favorites to win, and since the NFL Playoffs expanded to twelve teams, and four games on Wild Card Weekend, four road teams have never won in a single weekend. Three of four have won on four occasions (2005, 2006, 2011 and 2014) and conversely, four home teams have won three times ever (2001, 2007 and 2012). Needless to say, I’m baffled.

Why I Like Kansas City: The Chiefs won in Houston in Week 1 … Going into this season, only 41 teams in the Super Bowl era have won at least ten consecutive games in a single regular season, and the Chiefs are on a ten game winning streak … 11 of those 41 teams that have won at least ten consecutive games in a single season have won the Super Bowl … The Chiefs have won those ten games by an average of 15 points … KC was second in the league in Interceptions, and Brian Hoyer doesn’t exactly inspire a ton of hope …  Alex Smith has been surprisingly outstanding in the postseason in his career (he’s only 1-2 as a starter, but Smith has 873 passing yards, 9 touchdowns, 0 interceptions and a 108.6 passer rating in those three games)

Why I Like Houston: I irrationally liked Houston at the start of the year and I would feel like a big dummy if I backed off of the Houston bandwagon now and then it bit me in the ass … Andy Reid hasn’t had an Andy Reid game in about three months, and that bodes well for the Texans … Over the last nine weeks Houston is 7-2, have given up 6, 6, 17, 6, 10, 6, and 6 points in those seven wins … DeAndre Hopkins is the best playmaker on either team, and he had 9 catches for 98 yards and 2 touchdowns in the first meeting between these two teams … J.J. Watt, league leader in sacks, is good enough to single-handedly decimate a Chiefs offense that is otherwise average

The Pick: Kansas City 24, Houston 22 (It really worries me that just about everyone I’ve heard talk about this game is so quickly giving the edge to Kansas City … I think it’s closer than people are expecting)

Why I Like Pittsburgh: Ben Roethlisberger is my answer to the question “Which QB not named Tom Brady or Peyton Manning gives his team the best chance to win over the last decade”  … Marvin Lewis has never won a Playoff game, like ever … The last time Pittsburgh was a six-seed and playing in Cincinnati in the Wild Card Round, they went on to defeat Seattle in Super Bowl XL, and unique factoids like that carry a lot of weight with me … Pittsburgh won in Cincinnati less than a month ago in a game that was a virtual must-win for the Steelers … Roethlisberger is 11-2 in his career in games in Cincinnati … Antonio Brown and Martavis Bryant are both capable of making great defenses look pedestrian … Pittsburgh’s defense forced the fourth most turnovers in the league

Why I Like Cincinnati: A.J. McCarron doesn’t make me feel all that much worse about the Bengals than Andy Dalton did … A.J. McCarron’s wife is smoking hot … The Bengals defense kept the Steelers offense relatively in check in their two meetings in the regular season (they picked Roethlisberger off four times and limited the Steelers big plays) … Expanding on the last point, Cincinnati was the best defense in the league against throws over 15 yards … Tyler Eifert is back and healthy after missing a few weeks in December … A.J. Green is plenty capable of matching the output of Brown or Bryant

The Pick: Pittsburgh 27, Cincinnati 21 (This pick has nothing to do with A.J. McCarron; if Andy Dalton were healthy and playing I’d still have Pittsburgh … there’s a reason why everybody anointed them “The team you don’t want to see in the Playoffs” a few months ago)

Why I Like Seattle: Seattle won in Minnesota by 31 points only one month ago, and it was as one-sided of a 31 point ass-beating that you could find …  The Seahawks finished this season 8-2 in their last ten games, very similar to their 9-1 finish to last season … For all that has been made of Seattle’s offensive turnaround, their defense was also first in the league in points allowed per game and the third best against the run … Russell Wilson was the best pocket passer in the league and Minnesota’s defense rarely blitzes opposing quarterbacks … Marshawn Lynch is expected back, and he once nearly caused a riot in a Wild Card Round game

Why I Like Minnesota: Minnesota could theoretically stifle Seattle’s offense in a way that St. Louis did in Week 16 (control the clock, pound the ball, limit big plays, etc.) … Adrian Peterson led the league in rushing … The Vikings played without their two starting safeties in their Week 10 matchup against the Seahawks … Minnesota’s Special Teams was just as good as Seattle’s … Seattle is without Thomas Rawls, who torched Minnesota’s defense back in Week 10 … The last time a team played in three straight Super Bowl’s was over 20 years ago

Why I Like Green Bay: I’m still rightfully terrified of picking against Aaron Rodgers at any point in time … Washington hasn’t beaten a team with a winning record all season, and they didn’t fair too well against the two Playoff teams that they played and lost to (they were outscored 71-26 in games against New England and Carolina) … The Packers have a big time edge over Washington in Playoff experience, and in the number of guys you feel like you could trust in a big game … Are we totally sure Kirk Cousins can be trusted in a Playoff game?

Why I Like Washington: “You Like That?” > “Relax” … The Redskins will be handing out “You Like That?” rally towels for the game, and if that’s not good for karma then I don’t know what is … Kirk Cousins stats since “You Like That?” : 2,746 yards, 23 touchdowns, 3 interceptions, 119.1 passer rating … Aaron Rodgers and the Packers are only 2-4 in the Playoffs since they won the Super Bowl five years ago … The Packers offensive line has been in shambles all year … Jordan Reed is probably the best playmaker on either team … Nothing that Green Bay did in the second half of the season suggests that they’re a better football team than Washington

The Pick: Green Bay 24, Washington 19 (There’s just no way two rivals of my Chicago Bears are losing on the same day in the Playoffs, and I don’t like that one bit)