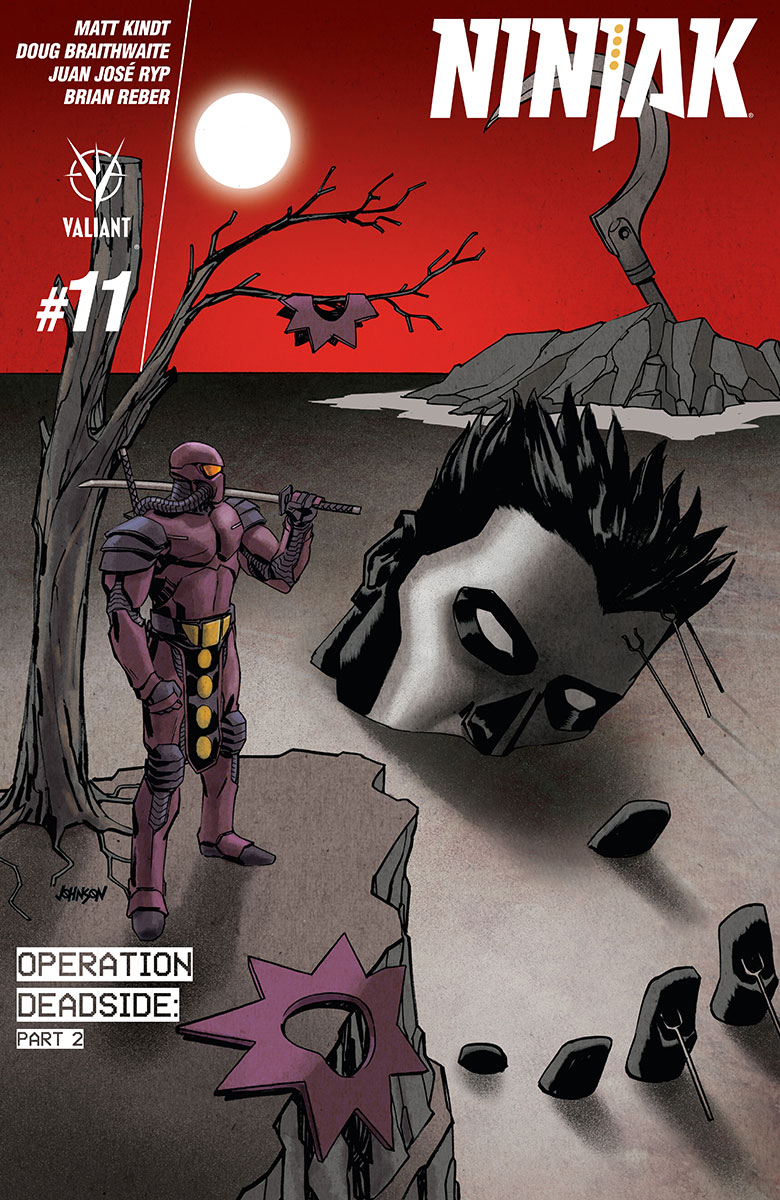 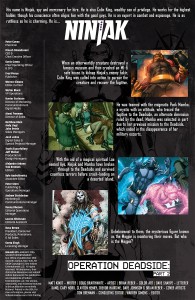 Ninjak #11 opens with Ninjak and Punk Mambo, stranded on a Deadside Island, plotting their next move. Oddly enough, the sun (or perhaps simply some light source) rises in Deadside, an almost unfitting and peculiar touch for such a dismal place. Ever the MacGuyver, Ninjak seeks higher ground to launch a ‘mini-satellite’ he managed to cobble together to get a better look at their surroundings. The scenes that follow, while created brilliantly by Doug Braithwaite and Brian Reber, depict a lush tropical isle that seems out of place and confuses the tone of the book. 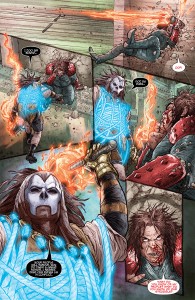 They encounter a humanoid being Ninjak refers to as a ‘sycofantom,’ which assaults them telepathically, tapping for some reason into their memories. This is now a tired concept in the Valiant universe, and one they should give serious thought to retiring. This idea is even more unwelcome coming once again from Matt Kindt, who has used similar concepts in both Divinity and The Valiant. Ninjak dispatches the assailant, but the method he uses is entirely questionable and unclear. He uses some manner of energy or projectile weapon, about the size of a pen, and the whole affair ends with a satellite the size of a boat landing on the creature. While this was probably meant to be the ‘mini-satellite’ previously launched, its size is inconsistent. It may be best not to put too much thought into this portion of the book. 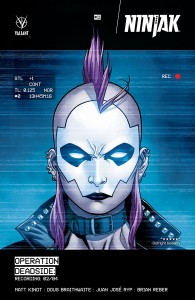 Overused as it may be, the memory gag does give a glimpse into Punk Mambo’s previously forgotten first Deadside mission. This sequence shows a much more interesting Shadowman who seems bent on not needlessly killing the team sent from Earth so long as they stay out of his way. This scene, woefully short, brings the feel of the book to its apex, before bringing the focus back to the island, which turns out to be an ancient and gigantic being that was wounded eons ago by a building-sized sword that the pair remove in hopes of gaining the creature’s help. Gain it they do, and it brings them to their target, Shadowman. Interstingly, he seems to have a few prisoners, two of which are absolutely members of the Shadow Seven from the previous arc and the other two… well, who knows. Their presence certainly does raise some interesting questions, the kind of dangling plot thread that invokes more speculation than frustration and is ultimately welcome. 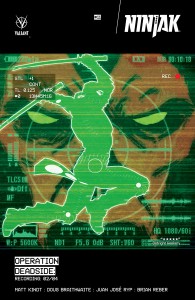 As with previous Ninjak issues, this book offers a back-up story. Continuing the ‘Legend of the Magpie,’ our re-invented Shadowman, the story gives a short but amazingly created (with Juan Jose Ryp adding to Matt Kindt’s narrative) origin story of sorts for Ember. Kindt introduces numerous things in these short pages, fleshing out just how diverse Deadside is and revealing that Magpie (almost certainly referencing ‘Magpie Syndrome,’ a compulsion to collect shiny objects) is bound by Master Darque’s powers to collect certain artifacts to gain his freedom.

While both artists do outstanding work in this issue, it’s the overall exposition that feels lacking, hasty, and confusing. With two issues left in the arc, there’s no reason it can’t end on a high note from here.