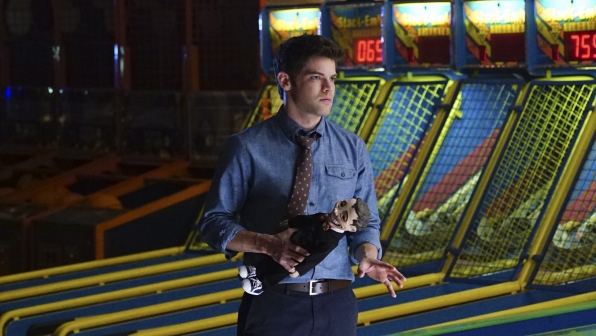 One of my least favorite scary movie tropes is creepy dolls, so I was not pleased when this week’s episode of Supergirl decided to use all of the creepy dolls. Of course this was probably to be expected since I knew that this week would be the week we were introduced to Winn’s villainous father, the Toyman. So really, it’s my fault, I should have been better prepared.

I had previously suspected, very early on in the show, that Winn would take a path down the dark side once rejected by Kara, due to his character’s supervillain alias in the Superman comics. However, I like the collective writing decision to have Winn actually be Winslow Schott Jr. and have his father be Toyman.

While I may be biased in liking this twist (you know, because of the whole being in love with Winn thing), I also liked that it gave viewers a chance to get to know him more as a complex character – which didn’t help the being in love with him thing, actually.

We got to see a whole new side to Winn that we had never seen before on Supergirl, and actually learn about his past, which had up until this point been pretty hazy. I was hoping that his struggle with his father – which I’m glad they acknowledged paralleled much of what’s been going on with Kara and Astra – would work to bring Kara and Winn closer together, which it admittedly did at first. And then it didn’t.

Even I can admit that kiss was too much, too fast (much like the resolution of the toy convention bombing attempt). It’s unfortunate that Kara didn’t return any of Winn’s feelings right away, but I still have hope. Kara is realizing more and more that James and Lucy are (sadly) not going to break up any time soon. And it’s evident from Kara’s monologue about how much she cares about Winn, that she, you know, cares about Winn. She just needs time to realize how much and in what way she cares about him, and I still hold hope that she’ll be surprised by the answer.

While Kara is off breaking hearts, Alex decides to use her feminine wiles to distract and spy on Maxwell Lord. It all starts out according to plan, Alex is super hot and she’s real good at using it, but it turns out Max has plans beyond making Alex eat slugs for their date. If it wasn’t obvious that he was on to her double agent status from her name in his phone: Mata Hari, a World War One spy, then it was definitely obvious when he somehow managed to get a spy cam on Alex’s bag. Without a doubt Max beat Alex at her own game.

This is really troubling because now Max is not only onto the fact that Supergirl is Alex’s sister, but also getting closer and closer to discovering who J’onn J’onzz is. So now two aliens are at risk of being found out, and who knows what Max will do with this information now that he has it?

Besides that little revelation, not much else happened to further any of the overarching story on this week’s episode of Supergirl. Even though I would have enjoyed a few more episodes about Winn and his dad, Toyman was relegated to monster of the week status. But Supergirl has proved time and time again that it’s more about the people and relationships than really battling any complex issues (besides feminism, that is).

I’ve said it before and I will say it again, it’s no Jessica Jones. But that doesn’t mean Supergirl isn’t just as successful. Supergirl is more about the lighter side of humanity. It’s more about finding who you are and the struggles that come with it, especially when you have superpowers. That’s why Supergirl excels with the structure that it uses. The monsters of the week tackle smaller issues, like learning how to fight on your own or when to ask for help, while the overarching story delves deeper into who am I, what do I believe, and what am I willing to do to achieve what I believe?

Hopefully as time progresses we’ll get more of that overarching story, but if Supergirl keeps bringing us episodes like Monday night’s, I can’t complain. Especially if there’s also more Kara-Winn kissing.