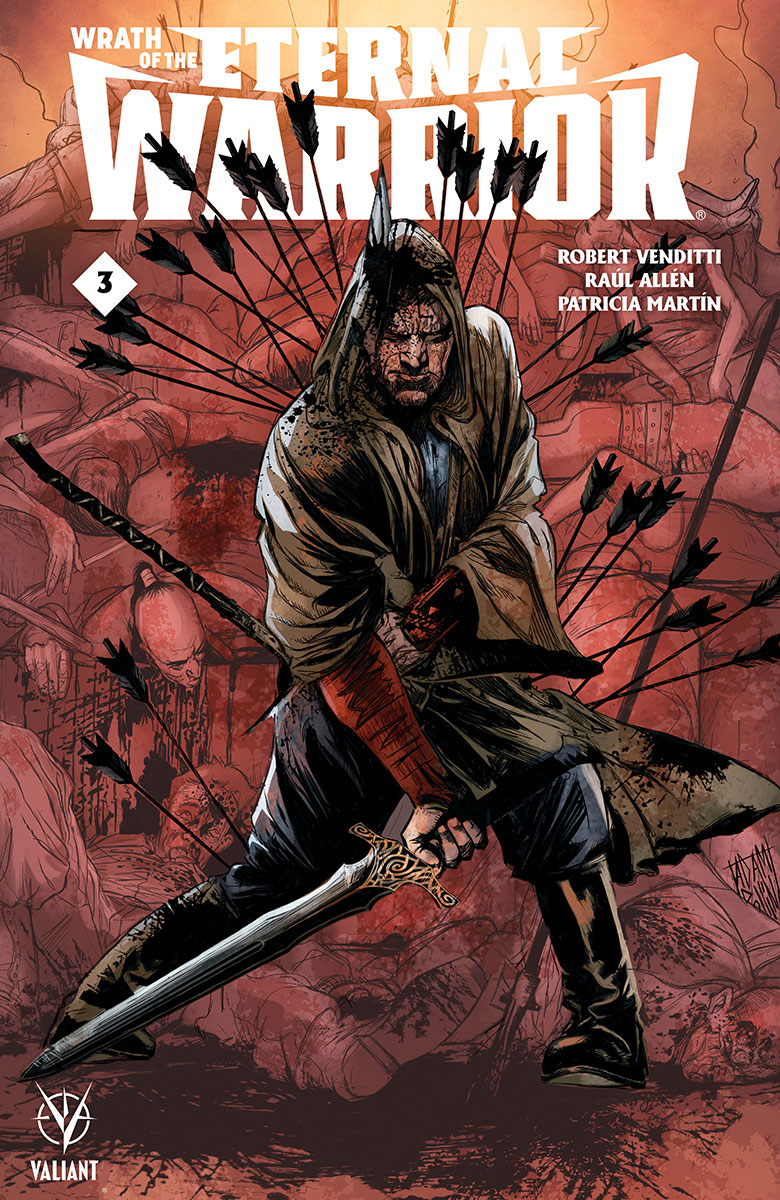 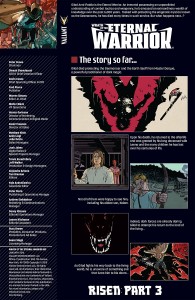 This week in Valiant comics, Wrath of the Eternal Warrior rages on towards the conclusion of its first arc, entitled ‘Risen,’ while Imperium ends ‘The Vine Imperative’ with an unexpected turn of events! 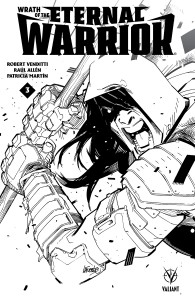 Wrath opens with a look back to one of Gilad’s previous struggles to escape the afterlife, with the demons of the Hellscape putting the torture device ominously revealed at the end of the last issue to good use. He makes his escape before the hordes can begin their feast on his never-ending supply of blood, and the action sequences that carry this do so in an entertaining and gruesome fashion. These events make up the bulk of the book and serve as an example for what he’s likely to want to avoid on subsequent return journeys to the land of the living. One comical panel reveals that these foes can’t actually die, as little pieces of the demons who failed to hold him explain to their boss that he escaped. A short scene in Gilad’s seemingly personal heaven brings the story back to the present, reinforcing his desire and reasons for leaving. Venturing into the Hellscape, he is met with the expected resistance of immortal demons wishing to drink his blood. The ensuing action is intense, and it seems as though he’ll have little trouble leaving this time. However,  just when the immortal hero is about to reach the Iron Door (which leads presumably out of the Hellscape), he is intercepted by the aptly named Humongous. This sets the stage for what will surely be an interesting final issue for the arc.

While the action and violent sequences in this book are certainly entertaining, brought to life by Raul Allen and Patricia Martin, it is a quick read. This is due mostly to the style of small panels. As with previous issues, experienced comic fans will find plenty to soak up, but those thirsting for more exposition are less likely to linger. As for the story itself, Robert Venditti continues to present an interesting conflict for the hero, but so far has presented little to develop the character. 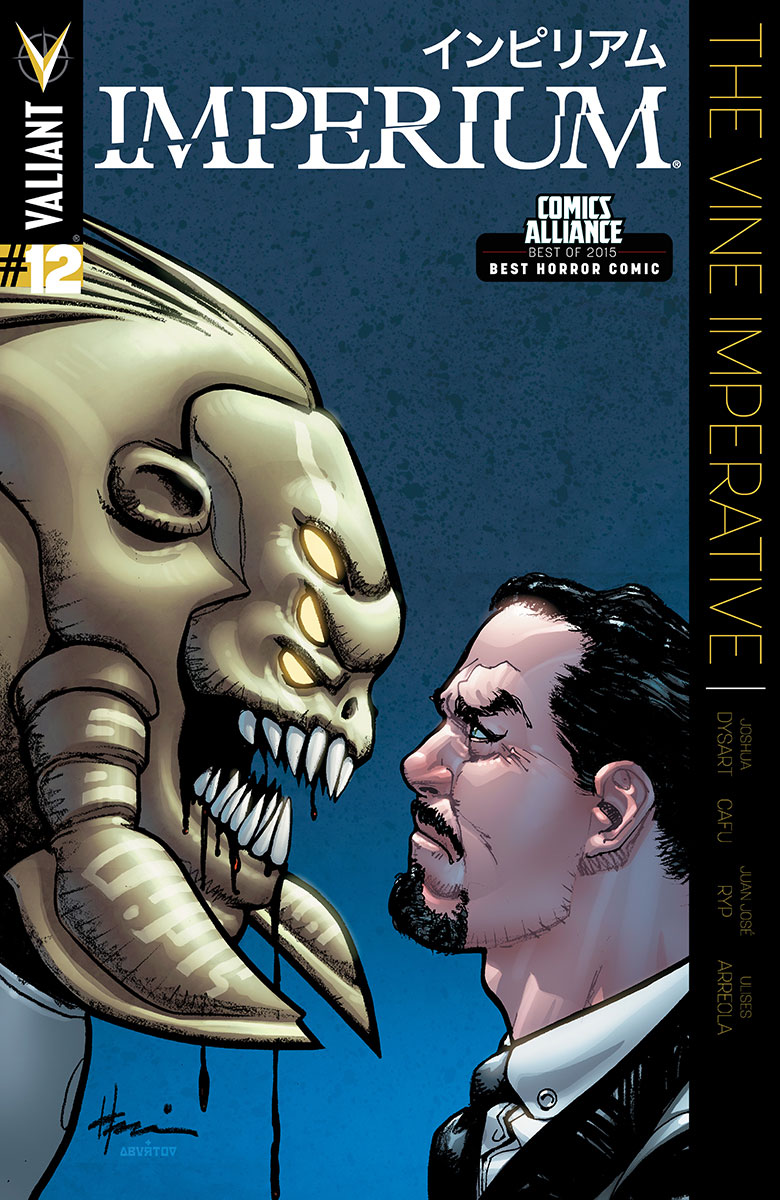 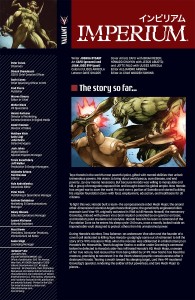 Imperium continues its dual-timeline narrative, and in this issue the effect is simply outstanding. The past narrative reveals two important story elements, both of which tie nicely into the final present-day scene. First, it’s revealed that Tess Solomon’s ‘triumph’ over Harada was nothing more than offering the empty threat of a full-scale invasion fleet. While it’s implied both parties were aware of the deception, the real ruse was Solomon presenting to the VPLA that she had scared him into peace, thus beginning decades of quiet between the two fronts. 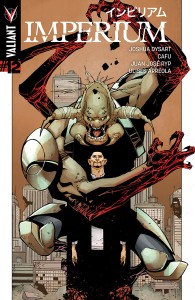 The second important story element is the spiritual awakening of Lord Vine 99, occurring after his re-birth following his first failed attempt on Harada’s life. This comes at the hands of a religious emissary, sent from a sect of the pure Vine to ease the anguish she sensed from him as he re-grew. Over time, LV-99 came to contemplate instead of seethe with the hatred for Harada he was programmed with. He becomes almost as one with the surrounding forest over years, and as Harada closes in on him he laments that he will not remember the freedom and pleasure he has experienced during his enlightenment, doomed to be ‘reborn a slave to conflict.’

The portions of the book that focus on the modern day see Harada’s ship invaded by VPLA soldiers who subdue most of his guard with their anti-psiot tech. As LV-99 moves to open the sleep vault protecting the vulnerable Harada, and thus fulfilling his life’s purpose, Pinter reveals he hopes to take Harada alive and exposes his goal to profit from the capture. Betraying Pinter, Tess reveals to LV-99 that he will cease to be the moment he fulfills his purpose. Though it’s a tough sell, the scene ends with 99 disassembling Pinter and Solomon reinforcing the truce with the awakened Harada. While this arc has revealed a great deal of history for both the Vine Plantings and Harada, it’s really LV-99 who steals the show. Joshua Dysart has created an interesting and moving character out of a pre-programmed biological weapon, and the possible implications of his past and present transformations illicit a mental salivation. How the character develops from here will undoubtedly be fascinating. The only and slightly disappointing aspect to this arc is its failure to connect on any level with the events in X-O Manowar involving other Vine Plantings, but without the context of a timeline it’s easily forgivable.

Each time period in this arc has been handled by a different illustrator, with Juan Jose Ryp’s gritty pencils making the past come to life and Cafu’s smooth lines carrying the action of the present. This arc has been all the more enjoyable for this, giving each time period a distinctive feel while holding the events together. Between the art and the story, it isn’t hard to understand why Imperium continues to rank so highly amongst Valiant’s titles.