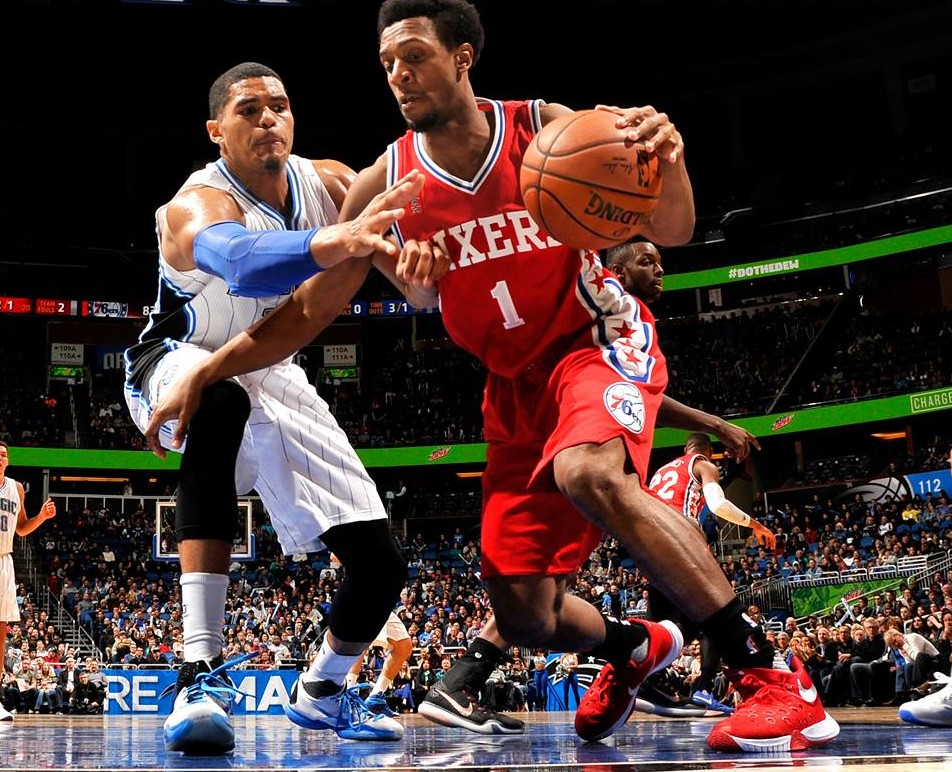 A collection of post-game quotes from the Philadelphia 76ers’ victory over the Orlando Magic.

BRETT BROWN
On sixth win of the season
“We feel greedy in that we felt like we let the Chicago game pass us by. We shake Carmelo’s [Anthony] hand, he hit a three to take it into overtime at Madison Square Garden and we end up losing that game. We feel like we’re playing good basketball and we feel like our defense is carrying us. To have the group be as spirited, committed and defensive oriented as they are, I feel like it’s just team stuff that stands out to me now.”

On securing the victory despite injuries
“To lose Nerlens and JaKarr, already being down Nik Stauskas, I thought it was a great team effort. You look at Covington with 11 rebounds. You look at Jerami’s five blocked shots. You look at the timely baskets that Hollis and Isaiah Canaan made. Jahlil carried us in the first half and make some big baskets and had a few good defensive plays at the rim in the second half. It was a team effort led by the defense.”

On Nerlens Noel’s headache issues
“I don’t know. It’s an outlier. It’s not something that has happened before. He has had some stomach problems at the start of games and at halftimes. He gets wound up. With Nerlens, he’s got his own ways of dealing with anxiety to go play and compete. I look at it as, in a twisted way, a good thing that he cares that much, but sometimes it gets the better of him. I think this is one of those examples. He’ll be fine though. He feels better now.”

JAHLIL OKAFOR
On winning without Noel, Sampson
“We’re just a close-knit group. We’ve got each other’s back. We know what Coach [Brown] wants from us and we just went out there and executed.”

SCOTT SKILES (MAGIC HEAD COACH)
On whether or not his team gave a full effort
“I almost want to burst out laughing at the question. No, not at all, not even close. Our lack of competitiveness is frightening, really. They were pushing us all around on both ends of the floor, making it hard for us to do anything. And we just basically capitulated.”

On cutting the deficit to four late in the game
“They had the ball with six on the clock, we just backed off of Canaan and he banged a three to put them right back up. It’s in our game plan that we have to get our heels above the three-point line when he has the ball, let alone when it’s the end of the shot clock in a tight game….There are winning plays and losing plays and on a percentage basis, throughout the course of the game, we’re making way too many losing plays.”

TOBIAS HARRIS (MAGIC FORWARD)
On taking an early lead in the 1st quarter
“I thought we started the game off pretty well. We were moving the basketball, getting good shots, getting in rhythm shots. We kind of got away from that and part of that reason is because we weren’t getting stops defensively, like we were in the beginning. So, with that being said, we have to really learn from this game and move forward.”

On team’s defensive struggles
“Our defense has been poor. Tonight it was poor. We couldn’t really dig down and get stops as a team. We couldn’t get consecutive stops in a row and that is what hurt us. We were able to score the ball in the 4th, but if we can’t get stops then there’s no way we can get back into the game and cut that lead down.”

NIKOLA VUCEVIC (MAGIC CENTER)
On team not executing down the stretch
“It’s really frustrating after we talked about it yesterday and then to come out and not do it, it’s frustrating….We started off great, had great pace, great defense and great offense and we were moving the ball and got up to a 10-point lead. Then, they made a run, our flow was gone and we never got it back.”